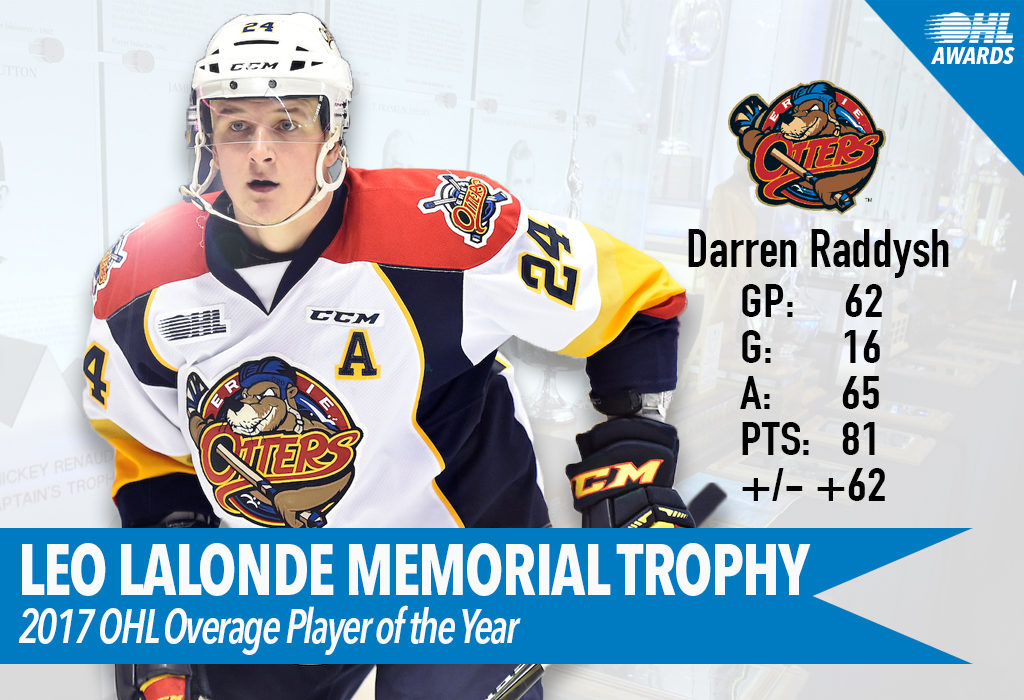 Toronto, ON – The Ontario Hockey League today announced that defenceman Darren Raddysh of the Erie Otters is the 2016-17 recipient of the Leo Lalonde Memorial Trophy awarded annually to the OHL’s Overage Player of the Year.

Raddysh led all overage players in scoring this season with 81 points in 62 games including 16 goals and 65 assists.  His 81 points were tops among OHL defencemen and established a new Otters single season mark for production from the blueline.  Raddysh is just the second defenceman following Andre Benoit (Kitchener 2004-05) to win the award in 34 years and joins former Otters Cory Pecker (2001-02) and Dane Fox (2013-14) as overage award recipients.

“This award means a lot to me,” Raddysh said. “As an overage player, there aren’t too many guys left in the league from when I came in, and the group of guys up for it this year are all talented and well respected. To be selected as Overage Player of the Year is an incredible honour. I look back and am proud of all the hard work put in during my five-year career with the Otters leading to this award.”

A 21-year-old from Caledon, Ont., Raddysh was originally chosen by the Otters in the fifth round of the 2012 OHL Priority Selection.  Over the course of his five-year OHL tenure he played in 274 regular season games accumulating 41 goals and 143 assists for 184 points.  In addition to his single season mark, Raddysh leaves the Otters as the franchise’s all-time assists and points leader among defencemen surpassing marks of 119 and 150 set by Chris Campoli from 2000-04.  Raddysh has also been instrumental in the Otters regular season success achieving a Canadian Hockey League record four-straight 50 win campaigns capped by a 2016-17 Midwest Division title and Hamilton Spectator Trophy.

“This is a great honour for Darren and the Erie Otters organization is extremely proud of his accomplishments, not just this season but over his career with the team,” said Otters General Manager Dave Brown. “This award is the culmination of his work and efforts the past five seasons to not only grow as a player, but shape his teammates around him. This season brought Darren numerous accolades including his marks in the Otters record book for defenceman scoring in a single season and in a career. And one thing that should not get overlooked is Darren’s participation and dedication to the culture change in Erie, helping to turn our organization into an institution dedicated to excellence. We’re thrilled for Darren’s accomplishments and are grateful to have him as a representative of the Erie Otters.”

Raddysh received 62 points in the voting process, followed by runner-up and fellow defenceman Santino Centorame of the Owen Sound Attack who received 42 points, and goaltender Jeremy Brodeur of the Oshawa Generals who finished in third place with 23 voting points.

Raddysh will be formally presented with the Leo Lalonde Memorial Trophy at the 2016-17 OHL Awards Ceremony scheduled for June 8 at the Hockey Hall of Fame in Toronto.