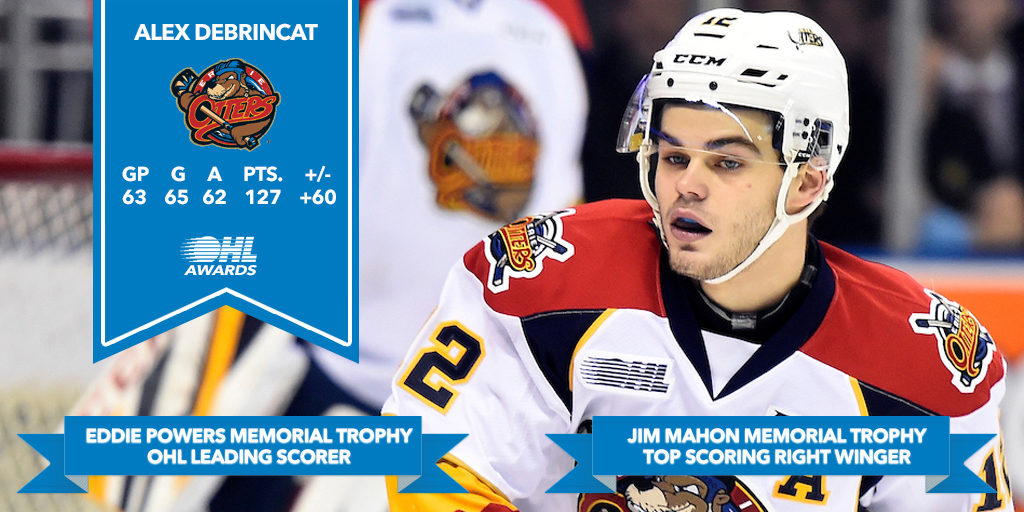 The Chicago Blackhawks prospect earns the Eddie Powers Memorial Trophy along with the Jim Mahon Memorial Trophy which is awarded to the league’s Top Scoring Right Winger.

DeBrincat recorded 65 goals and 62 assists for 127 points in 63 games to lead all OHL players in regular season scoring finishing 18 points ahead of teammate Taylor Raddysh who finished second with 109 points in 58 games.

His 65 goals represent a new Erie Otters single season record after cementing his position as the first player since Dale McCourt (1974-77) to record three-straight 50-goal seasons and matching Mike Ricci’s 1988 mark with goals in 19 consecutive games.  DeBrincat also became just the eighth player in the league’s modern era to record three-straight 100-point seasons, and the third Otter to reach the prestigious 300 career-point milestone.  In 191 career games over three seasons, the undrafted free agent signee has scored 167 goals and 165 assists for 332 points.  He is the Otters all-time leading goal scorer and the leading American goal scorer in OHL history.

The second round pick of the Blackhawks in the 2016 NHL Draft is the third Otter to earn the league’s scoring title doing so in a span of four years following Dylan Strome (2014-15) and Connor Brown (2013-14).  In addition to the Eddie Powers Memorial Trophy, Brown was also the club’s first Jim Mahon Memorial Trophy recipient.

The Eddie Powers Memorial Trophy was donated by the Toronto Marlboro Athletic Club in memory of Eddie Powers and was first awarded in 1945-46 to Tod Sloan of St. Michael’s who scored 79 points in 25 games.  Kevin Labanc of the Barrie Colts was last year’s recipient with 127 points in 65 games including 39 goals and 88 assists.  Other notable winners include Taylor Hall and Tyler Seguin who tied for the league’s scoring title before being chosen first and second overall respectively in 2010, while fellow first overall NHL picks John Tavares (2009), and Patrick Kane (2007) are also recent winners.

The Jim Mahon Trophy was first presented following the 1971-72 season by the players and management of the Peterborough Petes in memory of their right winger Jim Mahon who was accidentally killed that summer.  Labanc was also the 2015-16 recipient.