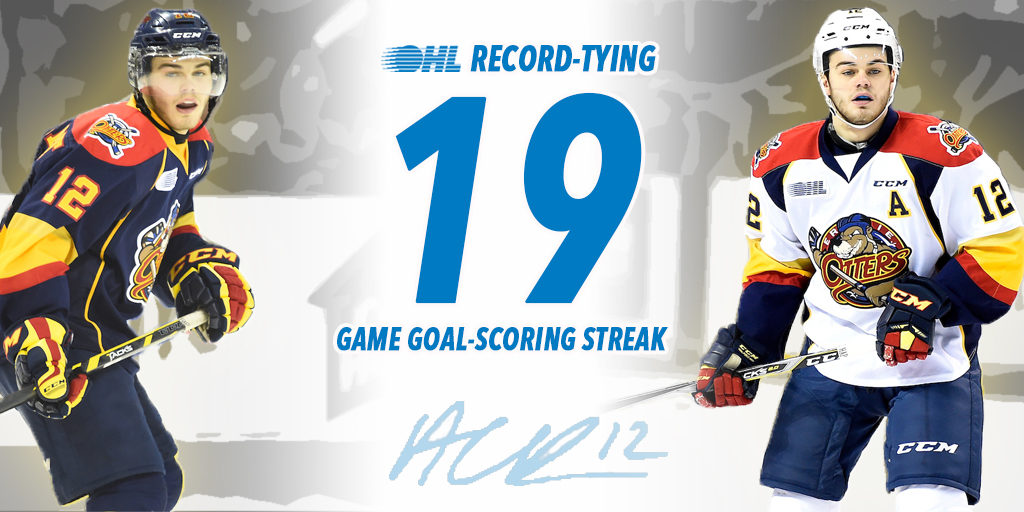 The Erie Otters maintained their three-point lead atop the Western Conference with a 7-0 blanking of the visiting Peterborough Petes to close out the weekend on Sunday.

The Petes managed to do a former graduate a favour though, keeping Mike Ricci’s 1988 OHL record of 19 straight games with a goal in place as Chicago Blackhawks prospect Alex DeBrincat saw his memorable run come to an end.

DeBrincat had an assist in the lopsided win but failed to find the back of the net, ending his streak of 19-straight games with a goal to tie the OHL’s all-time mark.

The OHL’s scoring leader, DeBrincat buried 26 goals over 19 consecutive games dating back to January 24th. He has 62 on the season to go with 60 assists for 122 points in 61 games and now sits just two goals back of the Otters’ single-season franchise goal scoring mark of 64. (Dane Fox, 2014)

Keeping track of DeBrincat’s accomplishments this season has been an arduous task. The Farmington Hills, Mich. native has eclipsed the 300-point mark on his career, become the Otters’ all-time leading goal scorer, surpassed Rob Schremp as the OHL’s all-time American goal-scoring leader and became just the second player in league history to register three-straight 50-goal seasons.

With three games left, DeBrincat’s Otters are just two wins away from becoming the first team in Canadian Hockey League history to string together four consecutive 50-win seasons. They’re also in the hunt for their second straight Hamilton Spectator Trophy awarded to the OHL team that finishes with the best record during the regular season.