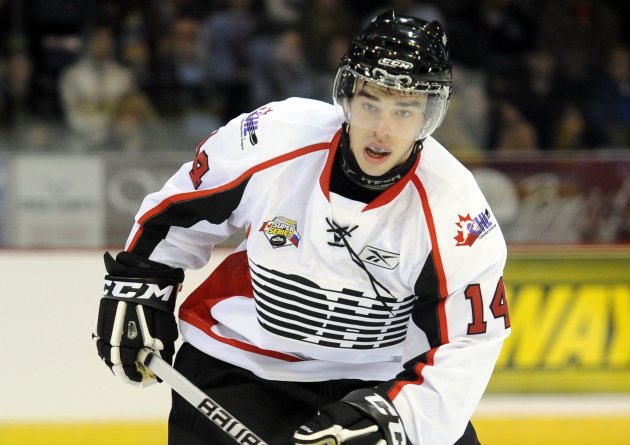 Toronto, ON – The Ontario Hockey League today announced that for the second time this season Greg McKegg of the Erie Otters is the OHL Player of the Week.  McKegg led the OHL with nine points in three games scoring six goals and three assists with a plus-minus rating of plus-5 for the week ending November 28.

McKegg began the week with a career-best four goals as first star of a 6-0 win over the Belleville Bulls on Thursday night.  His first goal not only held as the game-winner, but sent 4,618 stuffed bears on the ice as part of the Otters’ third annual Teddy Bear toss for the Salvation Army.  He also became just the sixth Otter in team history and the first since 2004 to score four goals in a single game.  Later in the week McKegg scored two goals and one assist as second star of a 7-3 win over the Kitchener Rangers on Saturday, before tallying two assists in a 5-4 overtime win over the Guelph Storm on Sunday.  His second assist set-up the game-winning goal by David Shields with just four seconds to play in the extra frame.

McKegg, an 18-year-old from St. Thomas, ON, is playing in his third OHL season with the Otters.  The Otters’ captain is tied for fifth in league scoring with 20 goals and 20 assists for 40 points in 28 games so far this season.  McKegg was selected by the Toronto Maple Leafs in the third round, 62nd overall, in the 2010 NHL Entry Draft.  He also competed for Team OHL in the 2010 SUBWAY Super Series.

Barrie Colts’ forwards Mark Scheifele and Colin Behenna were each considered for the award.  Scheifele produced eight points in three games including two goals and six assists, while Behenna scored three goals with four assists for seven points in three games.  In goal, Scott Wedgewood of the Plymouth Whalers had another strong week with two wins including a shutout victory and a goals-against-average of 0.820 and save percentage of .974.