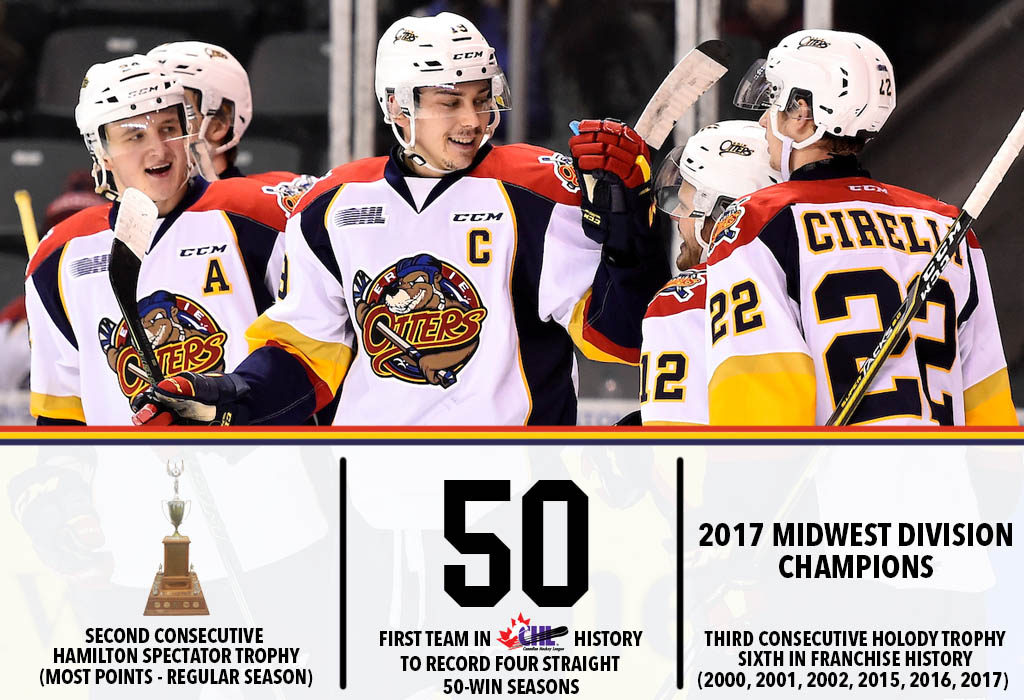 The Erie Otters are Hamilton Spectator Trophy recipients as OHL regular season champions for a second straight year following a 5-2 Saturday night win over the visiting Guelph Storm. This marks the third time in franchise history that they’ve been earned the honour, following efforts in 2001 and 2016.

Five different Otters had goals as Chicago Blackhawks prospect Alex DeBrincat set a new single-season franchise mark with his 65th goal of the season as Erie improved to 50-15-2-1 with 103 points.

The win puts the Otters in the Canadian Hockey League record books as they become the first team in CHL history to string together four consecutive 50-win seasons, surpassing the 2012-15 Kelowna Rockets, 2011-14 Edmonton Oil Kings, 2009-12 Saint John Sea Dogs and 1989-92 Kamloops Blazers who all accomplished the feat in three straight campaigns.

The Otters also locked down their third consecutive Midwest Division title, doing so for the sixth time in franchise history following other division crowns in 2000, 2001, 2002, 2015 and 2016.

Midwest Division winners etch their name on the Holody Trophy, awarded in recognition of the contributions to the OHL by former Guelph and Owen Sound Platers Governor Joe Holody.  The trophy was presented following the 1998-99 season for the first time with the realignment of the league into four divisions.

The Hamilton Spectator Trophy was first presented to the Ontario Hockey Association in the 1957-58 season.  Winners have gone on to capture the OHL championship 23 times and the Memorial Cup 11 times.  The 2013 Knights were the last team to hoist the Robertson Cup following a regular season title, while the 2009 Windsor Spitfires were the last OHL club to complete the trifecta.

The Otters have won seven playoff rounds in the past three years but will be in the hunt for their first OHL Championship since 2002 when they open the 2017 OHL Playoffs on home ice against the Sarnia Sting next week.