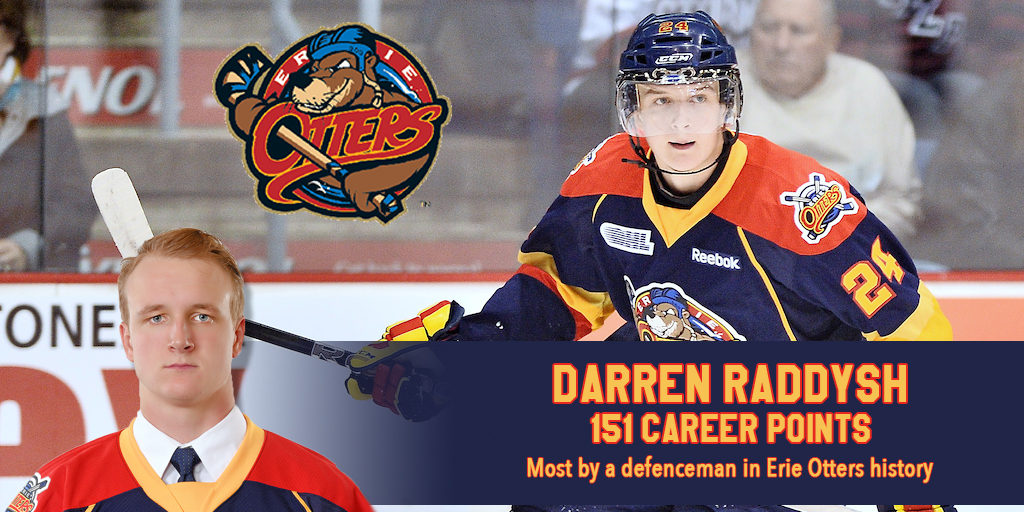 Fifth year Erie Otters veteran Darren Raddysh made franchise history on Tuesday, recording a goal and an assist in a 5-0 win over the visiting Kitchener Rangers.

Raddysh’s 12th goal of the season 7:51 into the second period was his second point of the night and the 151st of his OHL career, putting him ahead of Chris Campoli (2000-04) for first on the Otters franchise list among defencemen.

A 20-year-old native of Caledon, Ont., Raddysh has been with the Otters since the 2012-13 season after he was a fifth round pick by the club in the 2012 OHL Priority Selection.

An alternate captain with the Otters in his overage season, Raddysh leads all OHL defencemen with 48 points, including 12 goals and 36 assists over 39 games to go with the league’s fourth best plus/minus rating of plus-39.

Raddysh (37 g-114 a–151 pts.) is approaching other Otters franchise milestones for blueliners, including the club goals mark currently held by Carlo Colaiacovo (43, 1999-2003) and assists held by Campoli (119, 2000-04). His 249 regular season games played are sixth in Otters history and he could climb as high as fourth on that list by season’s end.

The right-handed shooting defenceman has played a considerable role in a special era of Otters hockey, one that has seen an OHL record three straight 50-win seasons. The oldest of two Raddysh brothers in Erie, Darren has played alongside the likes of exceptional talents in Connor McDavid, Connor Brown, Dylan Strome and Alex DeBrincat throughout his time in the Flagship City.

Raddysh and the Otters prepare for a highly anticipated road matchup with the London Knights on Friday as the two clubs continue to battle for Midwest Division supremacy.