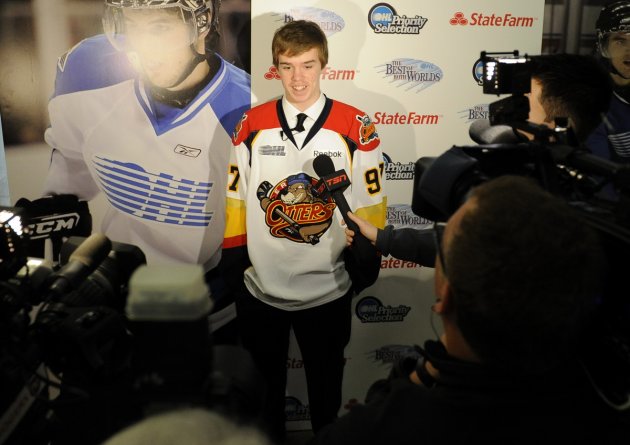 Born January 13, 1997, McDavid is the third player to receive “exceptional player” status for entry into the OHL, joining 2005 first overall pick John Tavares and last year’s first overall selection Aaron Ekblad. He was selected first overall in the 2012 OHL Priority Selection by the Otters in April.

As a 15-year-old with the minor midget Toronto Marlboros, McDavid dominated the opposition as he averaged over two points a game. McDavid collected 209 points (79g, 130a) in 88 games. He was Most Valuable Player in three tournaments: Silver Stick North American Championships, Peterborough Minor Midget Tournament, OHL Cup and was the GTHL Player of the Year.

Connor also shared the Buck Houle Award with 2012 OHL second overall pick Roland McKeown. The Houle Award is awarded by the Toronto Marlboros Hockey Club in recognition for outstanding on ice performance, leadership and loyalty to the hockey club in the minor bantam through midget years.

“It is a tremendous honor to sign a contract to play in the OHL,” McDavid said. “I couldn’t be happier and am very proud to be part of the Erie Otters organization. It is a dream come true for me.

OHL Central Scouting described McDavid as having “all the skill and tools to be very exciting and dominate at the next level. He controls the puck as if it were on a string and has the ability to make everyone around him a better player. He is also a fierce competitor and does whatever it takes to win a game.”

The NHL Entry Draft begins Friday, June 22 in Pittsburgh. Log on to OttersHockey.com or follow us on Twitter (@erieotters) for the latest information on the Otters in the NHL Draft.