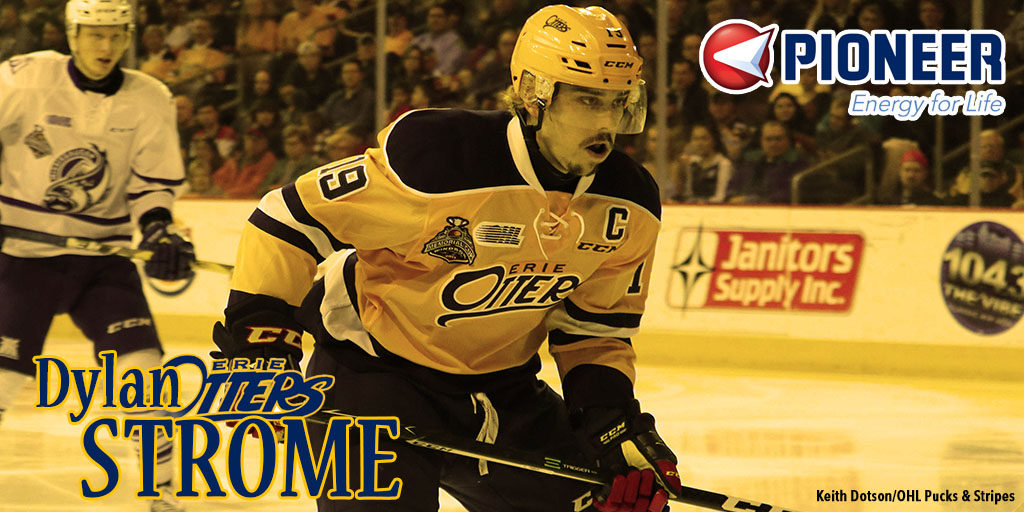 Toronto, ON – The Ontario Hockey League today announced that Arizona Coyotes prospect Dylan Strome of the Erie Otters is the Pioneer Energy OHL Player of the Week for the final playoff week ending May 14 scoring twice with five assists for seven points in three games with a plus-minus rating of plus-3.

Strome captained the Otters to their first Robertson Cup title since 2002 defeating the Mississauga Steelheads in five games to clinch the Rogers OHL Championship Series delivering a trio of multi-point performances down the stretch.  In Friday’s Game 5 victory on home ice, Strome’s playmaking ability helped the Otters erase a 2-0 deficit chipping in three assists in the 4-3 triumph including a pass to Anthony Cirelli in overtime for the series-winning goal at 2:41 of the extra frame.  Strome also scored a goal and an assist in Monday’s Game 3 despite a 4-3 loss, then contributed another goal and assist in Game 4 on Wednesday helping the Otters claim a 5-2 win.

As OHL champions the Otters advance to the 2017 Mastercard Memorial Cup in Windsor where they join the host Spitfires, QMJHL champion Saint John Sea Dogs, and WHL champion Seattle Thunderbirds in the 99th edition of the Canadian Hockey League’s prestigious national championship.  The Otters open competition against the Thunderbirds on Saturday.

A 20-year-old from Mississauga, Ont., Strome played four full seasons in Erie after being chosen by the Otters second overall in the 2013 OHL Priority Selection.  His 2016-17 campaign included 75 points in just 35 games played followed by a post-season where he scored 14 goals and 20 assists for 34 points in 22 playoff contests.  The third overall pick of the Coyotes in the 2015 NHL Draft is the leading scorer in Otters franchise history producing 354 points in 219 regular season games and 86 points over 69 playoff games that included a stretch of four straight appearances in the Western Conference Final.  Strome’s Player of the Week honour marks the ninth time an Otter has been recognized this season.

Watch video highlights of Strome and the Otters in Game 4 and Game 5 of the Rogers OHL Championship Series, along with Strome’s post-game interview moments after hoisting the Robertson Cup.

Also considered for the award this week was Carolina Hurricanes prospect Warren Foegele who earned the Wayne Gretzky ‘99’ Award as OHL Playoff MVP scoring three goals and three assists for six points in the final three games of the series, and Tampa Bay Lightning prospects Taylor Raddysh (3g, 2a) and Anthony Cirelli (2g, 3a) who each recorded five points in three games highlighted by heroic Game 5 performances that included a hat-trick for Raddysh and Cirelli’s overtime winner.  In goal, Troy Timpano made 72 saves in three games for the Otters posting a 2-1 record with a goals-against-average of 2.99 and save percentage of .889.