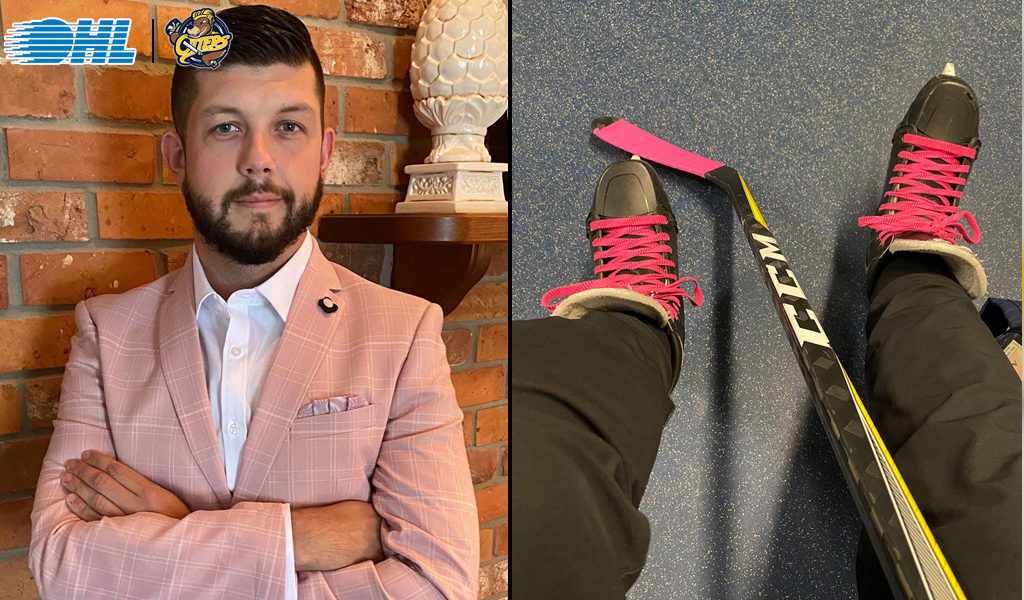 Wolfe has committed to wearing pink every day of the month to help raise funds that will help support initiatives that include research, patient services, and education around screenings and risk reduction.

To donate to the campaign, please visit the campaign website at https://t.co/hrjJFUXiMs pic.twitter.com/X0KUMpHBsf

When the American Cancer Society approached Wolfe about the campaign, he knew it was something he wanted to participate in.

“My dad lost his mom to cancer at a young age and that’s something that he’s always supported as an initiative,” he said. “This being Breast Cancer Awareness Month, I was pretty quick to jump to the opportunity to support the Real Men Wear Pink campaign.”

Wolfe has received a lot of support from the Erie Otters organization, who have planned some initiatives of their own to help him achieve his goal of $5,000 raised. As part of their efforts, they released a line of pink themed merchandise with all proceeds going towards the fundraiser. Corporate partners have also been involved, including The Original Popcorn House, who announced that a dollar from every sale of their pink cotton candy themed popcorn would also go directly to the campaign. Players have jumped in as well, sending in pictures and videos of their pink outfits while sharing their own messages about how cancer has personally affected them.

Wolfe expressed how proud he is of the Otters family and their involvement.

“From the business operations side getting the community partners involved and supporting it with the merchandise, to getting it up on the website, to sharing it on the social page…it’s been a real team effort,” he said.

A few more @ErieOtters have joined me in the #RealMenWearPink campaign. Thanks to you, we’ve raised over $2,700 with half of a month to go! pic.twitter.com/Qv0fDYWhRE

For Wolfe, being a member of the Otters organization and the Ontario Hockey League goes hand in hand with giving back to the community.

“To be able to use our platform is something I take very seriously. I’m really proud of being part of the Ontario Hockey League and the Erie Otters organization. We’ve had a number of player initiatives: Brendan Hoffmann had a fundraiser for ALS that he organized on his own, our captain Jack Duff started Captain Jack’s Kids in Erie and our associate coach BJ Adams had a fundraiser for frontline workers at the beginning of the pandemic,” he continued. “We’ve also worked extremely hard at participating and using our platform for social justice, standing up for anti-racism, anti-sexism, and mental health awareness. I think it’s really important that we use our platform and use our voices as prominent members of the community and the hockey industry.”