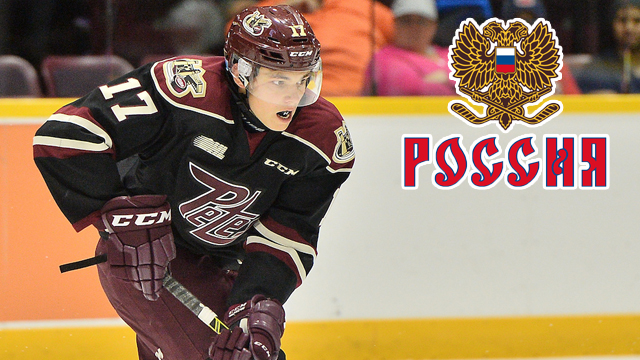 (Sault Ste. Marie, ON) – Petes forward Pavel Gogolev has been named to Team Russia’s roster at the 2016 World U17 Hockey Challenge. He joins fellow Petes Declan Chisholm and Hunter Jones, who are competing with Team Canada Black at the tournament in Sault Ste. Marie from October 27 to November 5, 2016.

Gogolev and Team Russia play a pre-tournament game on Thursday, October 27 at 4pm against Team Canada White, before kicking off the tournament on Sunday, October 30 against Team Sweden. The World U17 Hockey Challenge runs from October 30 until Saturday, November 5. All pre-tournament games will be live-streamed on the Hockey Canada website, while TSN and RDS will broadcast the gold medal game on Saturday, November 5 at 7:30pm EST.

“It is definitely an honour to represent Russia at the U17 tournament,” noted Gogolev. “I had fun playing in the exhibition games, and I’m looking forward to the challenge of competing against a lot of guys that I’ve been playing with in Canada when the tournament starts.”

Gogolev, a 6’1”, 173lbs right wing originally from Moscow, Russia, was selected by the Petes in the first round, eighth overall, out of the Canadian International Hockey (CIH) Academy near Ottawa, Ontario. The sniper scored 68 points in 46 games with the CIHA White Midget AAA team in 2015/16, and has suited up in eleven games with the Petes so far this season.