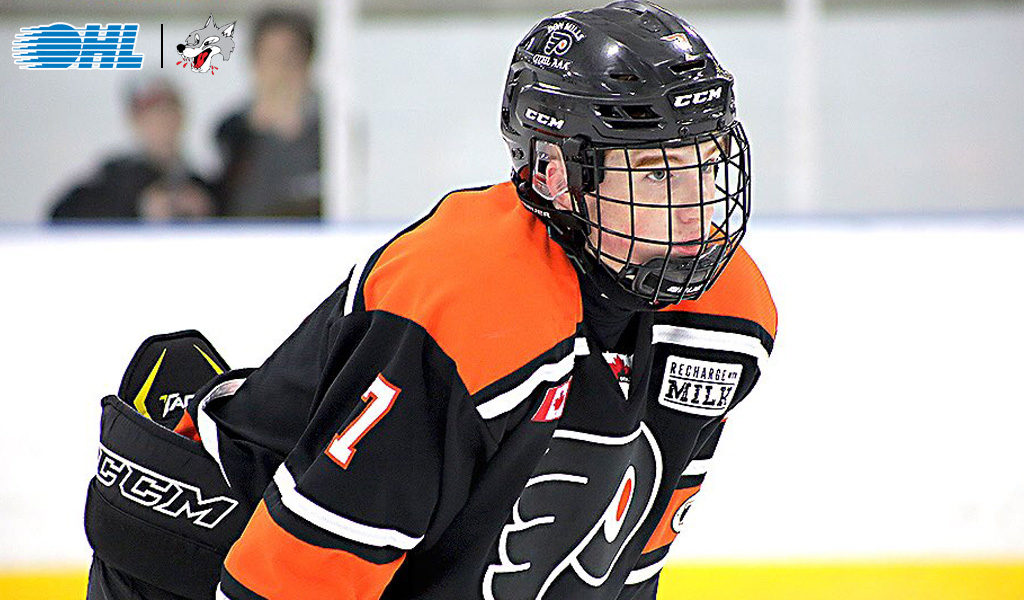 (Greater Sudbury, ON) The Sudbury Wolves are proud to announce that their fifth round selection from the 2019 OHL Priority Selection, Payton Robinson, has committed to the hockey club.

“We are thrilled to add Payton to the Wolves,” said Sudbury Wolves VP & General Manager Rob Papineau. “He is an outstanding and mature young man. Payton is an excellent skater and makes that great first pass. He was a key member of that Don Mills Flyers OHL Cup Championship team in 2019. He is a big intelligent right shot defenceman who plays a strong two-way game and has been a guy that we have had many NHL teams asking about for the draft. He is a player who wants to help us win and become a pro,” he added.

“I am beyond excited to join the Wolves and bring a memorial cup to the city of Sudbury,” said Robinson. “Thank you to everyone who helped make this happen.”

Robinson was selected 97th overall in 2019 from the Don Mills Flyers where he recorded 3 goals and 35 assists in 68 games. During the 2019-2020 season, Robinson played with the Burlington Cougars of the OJHL where he notched 15 points (2G – 13A) in 46 games as a 16-year-old. His rights were acquired in the OJHL by the Collingwood Blues in the Summer of 2020. Robinson a 6’3”, 191lbs defenceman from Burlington, ON and just recently tuned 18 in late April is ready to add size and skill to the Wolves’ blueline.

Welcome to the Pack @P_Robinson34🖋️
“He is a big intelligent right shot defenceman who plays a strong two-way game & has been a guy that we have had many NHL teams asking about. He is a player who wants to help us win & become a pro.” Rob Papineau VP & GMhttps://t.co/TsmHUjN8Qq pic.twitter.com/3ujOstUceB