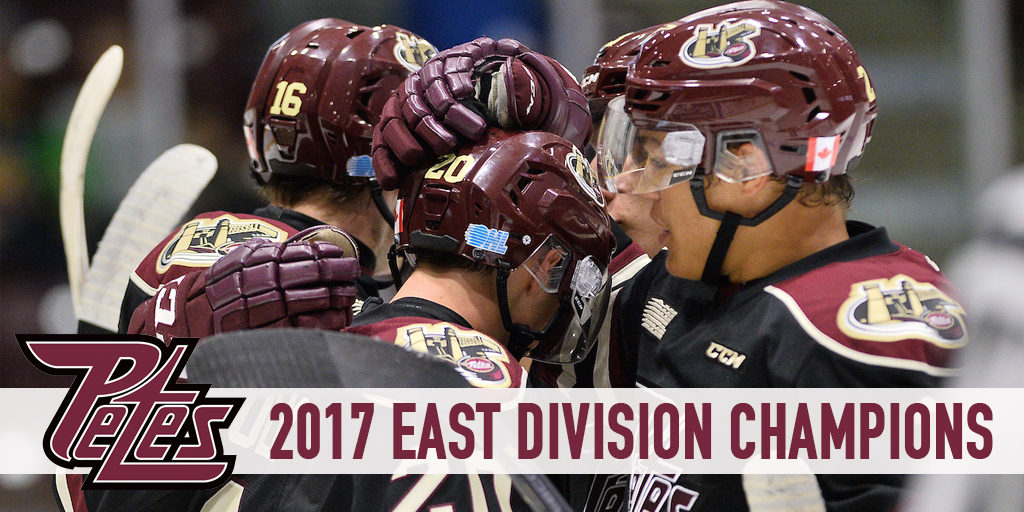 The Peterborough Petes are East Division Champions, securing the crown with a 4-0 blanking of the visiting Hamilton Bulldogs on Thursday.

The second of back-to-back shutouts for the Petes saw Dylan Wells stop all 37 shots he faced to record his first OHL shutout while Nikita Korostelev, Logan DeNoble, Matthew Timms, and Jonathan Ang all scored.

In addition to an East Division title, the 42-20-2-3 Petes also secure the first seed in the Eastern Conference standings ahead of the 2017 OHL Playoffs that will begin following the conclusion of the regular season on Tuesday.

The Petes are awarded the Leyden Trophy as East Division Champions, a trophy first presented in 1975-76 when the OHL was split into divisions with the expansion of the League to 12 teams. The award originated in recognition of Matt Leyden for his contributions to junior hockey in Ontario.

This marks the 11th Leyden Trophy in Petes franchise history and first since the second of back-to-back East Division titles in 2005 and 2006. Peterborough’s 42 wins are the most by the club since 2006 when they won 47 regular season games en route to their most recent OHL Championship.

The Petes were a powerhouse during the mid-to-late 1980’s under head coach Dick Todd, winning four Leyden Trophies in a span of five seasons from 1985-89 as they were led by such names as Scott Tottle, Mark Teevens, Mike Ricci and a young Jody Hull. Their dominance in that era culminated in an OHL Championship in 1989.

In addition to the aforementioned division titles, the Petes also won Leyden Trophy honours in 1979 and 1980, going on to win back-to-back OHL titles in those seasons. They also won the Leyden Division in 1992 as well as 1993, another season that saw the Petes capture OHL supremacy.

With a deep core of talent and strong goaltending, the Petes will be looking to hoist the J. Ross Robertson Cup for the 10th time in franchise history when the 2017 OHL Playoffs begin this month.

Not the banner we’re after, but a step in the right direction.