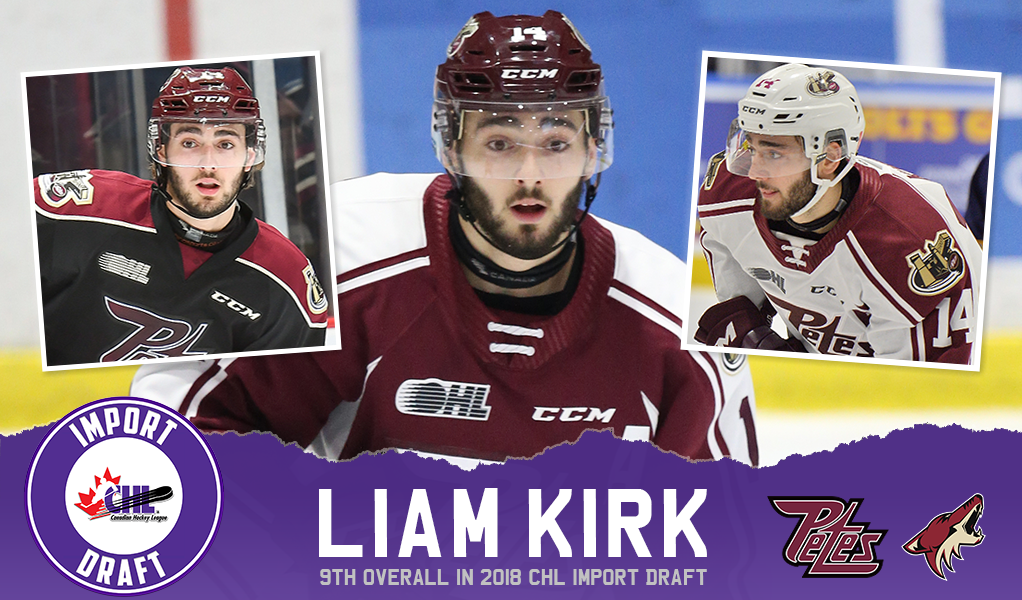 Even at the hockey rink, Britain’s got talent.

Chosen with the ninth pick in the 2018 CHL Import Draft, Liam Kirk, a native of Maltby, England, became the first British born and trained talent to be selected in the import class since 2010.

Hearing his name called by the Arizona Coyotes only days earlier as a late-round pick in the 2018 NHL Draft, Kirk was attending the team’s development camp when he was informed that his new North American home would be the quaint community of Peterborough, Ontario.

“I didn’t know too much about Peterborough but I knew what the OHL was,” Kirk told the Canadian Hockey League. “It’s one of the best junior leagues in the world. You see the names that come out of there and play in that league. I thought it was pretty exciting that I was going to be going there.”

After putting up video-game numbers in his native Britain, highlighted by an astounding 98-point finish through just 17 games playing as a 15-year-old with the under-18 Sheffield Steelhawks, the budding left-wing was ready to see how his play would adapt overseas.

Liam Kirk shares his experience living and playing in Peterborough as we stride towards tomorrow's and Saturday's OHL Priority Selection!#OHLDraft | #PetesAlumni pic.twitter.com/1RLcwusJ0d

“All of the coaches were incredible with me, being patient and helping me adjust, teaching me the North American style of game. I went to playing with people my own age, a different locker room atmosphere, and the junior hockey schedule,” Kirk detailed. “It was huge. It’s like the NHL at a junior level. Everyone is trying to be the best to get to the next level, so competition is hard in practice and games are intense. I developed so much over my time in Peterborough. I am happy that is where I ended up and I enjoyed every minute of it.”

Debuting with Peterborough in 2018-19, Kirk pieced together a solid first season, recording 47 points counting 26 goals and 21 assists across 63 appearances to finish sixth in team scoring. Kirk only improved on that performance as a sophomore, scoring north of point-per-game production in collecting 21 goals and 29 assists in 47 outings.

“It worked out really well because I enjoyed my time in Peterborough a lot,” Kirk added. “I met a lot of amazing people. My billets were exceptional. I can’t say enough good things about them, my teammates, coaching staff, everyone in Peterborough was really incredible. I am definitely proud of playing in Peterborough and of my time there.

“I hope there are many others who get the opportunity that I did to play in the CHL. I hope I am not the only one (from Britain). It was a great experience as you can really develop and become a better player because of it. I really hope it opens the door for others and teams look to Britain to bring in imports.”

We couldn’t be prouder of our boy @kirky_1424 showing the world what we already knew he could do!#YesKirky pic.twitter.com/xHn4DXho8P

Beyond on-ice success, what stands out to Kirk is the lifelong friendships and memories he made over his two seasons with the Petes.

“I ended up being close with Nick Robertson and others, we got pretty close. We spent a lot of free time hanging out,” Kirk said. “We had so many road trips. In my second year, our home rink was getting some work done so we were away for a bit. We got to spend a lot of time away on the bus and make a lot of great memories from those road trips. There were so many games we battled through.”

Two successful seasons in Peterborough followed by a dominant performance at the recently concluded IIHF World Championship in which he tied for top spot in tournament goal scoring with seven tallies in as many appearances and earned a spot on the All-Star Team ultimately helped Kirk reach another major milestone as he inked a three-year, entry-level contract with the Coyotes that will provide him with the next step in his hockey career.

“I’ll head over to Arizona, train a little bit, and get ready for training camp,” Kirk concluded. “Arizona has the decision on where I will be playing, but I think more than likely I will be (in the AHL) with Tucson. I just have to be ready to be the best I can right from the onset.”