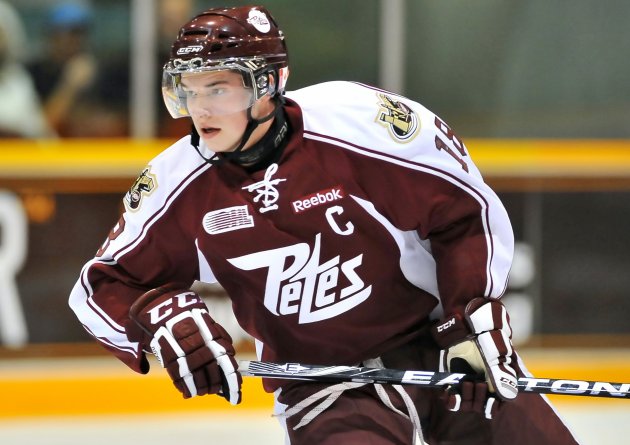 Toronto, ON – The Ontario Hockey League today announced that Matt Puempel of the Peterborough Petes is the OHL Player of the Week for the week ending November 6 after leading the league in scoring with six points in three games netting four goals and two assists and a league-high plus-minus rating of plus-6.

Puempel led the Petes to three straight wins beginning Thursday night with a two-goal performance as first star of a 4-3 win over the visiting Sault Ste. Marie Greyhounds.  The Petes then took to the road and faced the Mississauga St. Michael’s Majors on Friday night.  Puempel scored once and set-up Austin Watson’s shorthanded game-winner as second star of the 5-2 win over the Majors who entered the contest as the OHL’s top Eastern Conference team.  Puempel’s week wrapped up on Saturday with a goal and another assist on a game-winner scored by Watson to lift the Petes to a 4-2 road win over the Sudbury Wolves.

Puempel, an 18-year-old from Essex, ON, is playing in his third OHL season with the Petes.  Selected in the first round of the 2011 NHL Entry Draft, 24th overall by the Ottawa Senators, he leads the Petes in scoring with 11 goals and nine assists for 20 points in 18 games.  Puempel will also play for Team OHL in the 2011 SUBWAY Super Series this Thursday night November 10 in Ottawa, ON.

Last week’s award winner and fellow Senators prospect Shane Prince was considered again this week after scoring three goals and two assists for five points in three games.  Boone Jenner of the Oshawa Generals, who will also suit up for Team OHL this week in Ottawa, had five points in three games scoring a goal and four assists.  In goal, Malcolm Subban of the Belleville Bulls went 2-0-0-0 with a shutout victory posting a goals-against-average of 0.49 and save percentage of .982.