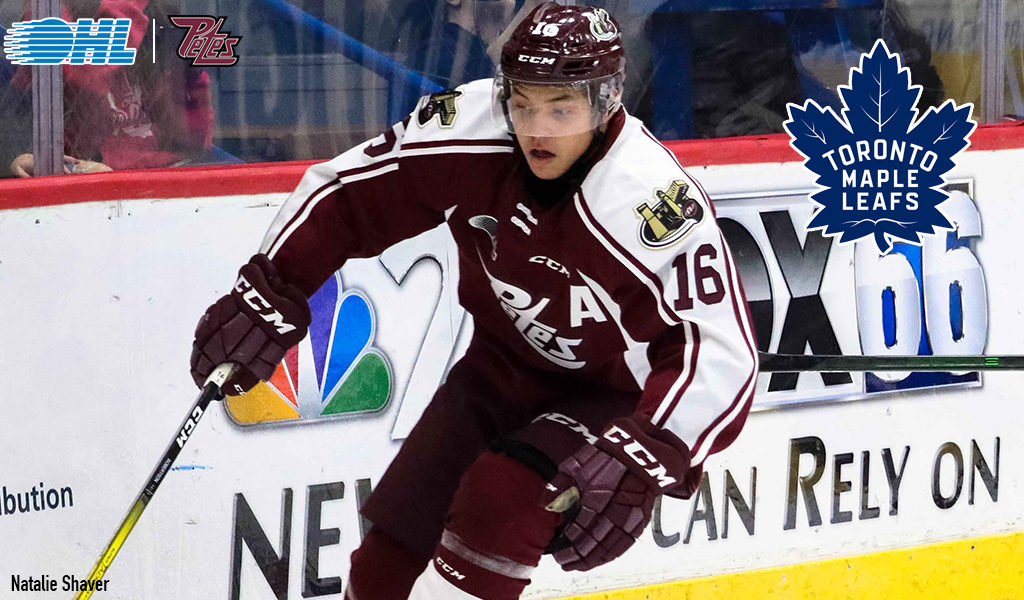 Peterborough Petes forward Nick Robertson put the cherry on top of a 55-goal season on Sunday night, making his NHL debut with the Toronto Maple Leafs.

The CHL’s Most Sportsmanlike Player, Robertson skated in a playoff game at the age of just 18, becoming the sixth player in NHL history to do so joining Rod Brind’Amour, Randy Moller, Jarome Iginla, Gary Stewart and Mike Modano.

DYK? @nickrobertson01 (18 years, 326 days) is set to become the sixth player to make his NHL debut in the postseason at age 18 or younger and first since Jarome Iginla in Game 3 of the 1996 Conference Quarterfinals. #NHLStats #StanleyCup pic.twitter.com/JwfBuzp0F7

“I thought Robbie had some good moments in the game,” said Leafs head coach Sheldon Keefe. “He was good in a game that was difficult to play.”

Robertson saw 12 minutes and 28 seconds of ice, nearly scoring his first NHL goal in the early shifts of the first period as Toronto was shutout in a 2-0 loss to goaltender Joonas Korpisalo and the Columbus Blue Jackets. The matchup kicked off a best-of-five game Stanley Cup Qualifier series between the two clubs.

Toronto’s second round pick in the 2019 NHL Draft last summer, Robertson comes off a tremendous season in Peterborough that saw him lead the OHL in goals (55), shorthanded goals (8) and game winning goals (10). He also represented the United States at the 2020 World Juniors in Ostrava, Czech Republic and was voted an OHL First Team All-Star at left wing.

50 goals in 43 games! 🚨 @MapleLeafs prospect @nickrob2001 becomes @CHLHockey‘s first to the half-century mark in 2019-20 and is 14th player in storied history of @PetesOHLhockey to accomplish the feat.