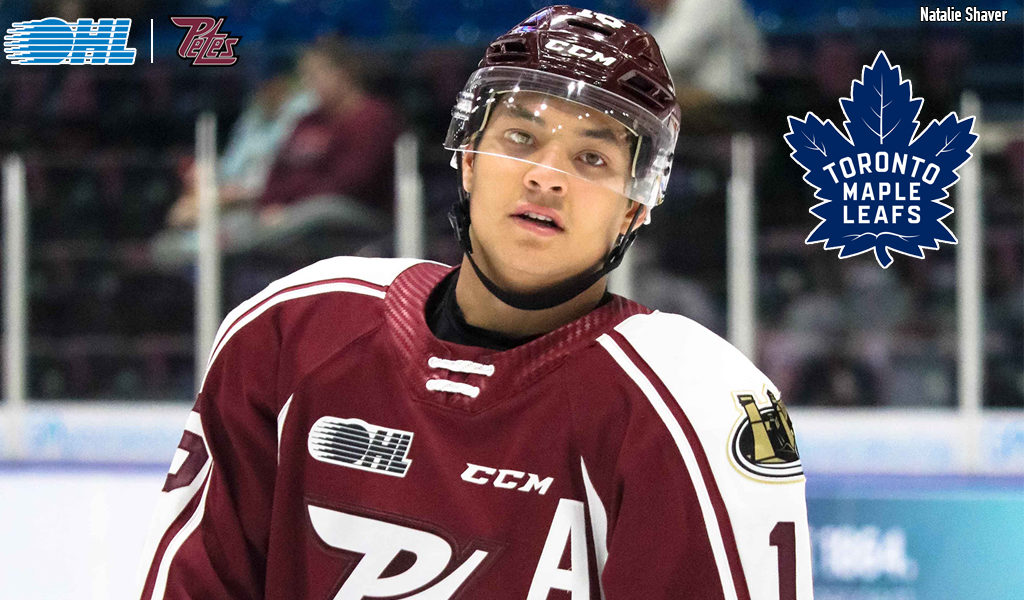 Toronto Maple Leafs General Manager Kyle Dubas announced Wednesday that Peterborough Petes forward and 2019 second round NHL Draft pick Nick Robertson will join the club as it prepares for a return to action on the other side of the COVID-19 hiatus.

Dubas discussed Robertson’s continued progression and development as a player with Sportsnet’s Tim & Sid, citing the 18-year-old’s impressive 55-goal season with the Petes along with a strong showing representing the United States at the 2020 World Juniors this past January.

Robertson, who led the CHL in goal-scoring, was also recently named the OHL’s Most Sportsmanlike Player. He’s maintained a structured training regiment throughout the extended break, working out with brother and 2018-19 OHL scoring champion Jason Robertson who spent this past season with the AHL’s Texas Stars.

“We’ll see what the coaching staff and what Toronto wants, but just personally — mentally and physically — I think I’m there.”

After a season of success on the ice and further gains off it, Nick Robertson believes he’s ready for his shot. (@reporterchris)https://t.co/2GP09lkyb6

“I think that I’ve enhanced a lot of my off-ice performance now which can help me with my on-ice,” Robertson told Sportsnet’s Chris Johnston on Wednesday. “Overall I think I’m ready. We’ll see what the coaching staff and what Toronto wants, but just personally — mentally and physically — I think I’m there.”

Robertson is currently staying with family friends in Windsor, Ont., after making his way up to Canada last Thursday to start serving the country’s mandatory 14-day quarantine and plans to travel to Toronto once that’s completed.

“The commitment to your fitness level as an individual and as a team is going to have such a major, major impact on how you perform coming back from [the COVID-19 pause],” Dubas said on Wednesday. “Nick is a person who is as committed as any that I’ve seen — certainly at that age — and I know what he’s been doing since he’s been back home in Los Angeles, and quarantining at home, and I know his commitment to being in the best possible shape that he can be.”

For more on Robertson’s pursuit of a playoff roster spot with the Leafs, visit sportsnet.ca.