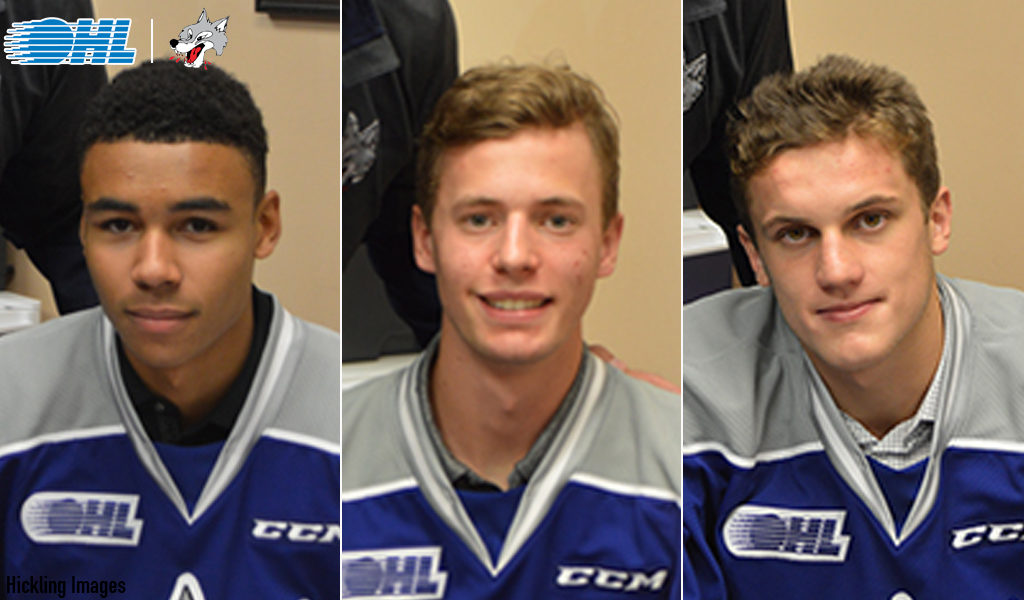 Sudbury, ON – The Sudbury Wolves are pleased to announce that three players have committed to the hockey club out of Training Camp including 17-year-old defencemen Isaak Phillips and Drew Wawrow along with 18-year-old forward Owen Robinson.

A 6-foot-3 left-shot blueliner from Barrie, Ont., Phillips was Sudbury’s fourth round (80th overall) pick in the 2017 OHL Priority Selection from the Barrie Colts Minor Midgets. After putting up 23 points (6-17–23) in his minor midget year, Phillips recorded 11 points (3-8–11) in 52 games with the OJHL’s Stouffville Spirit last season. A late 2001 birthday, he won’t be eligible for the NHL Draft until 2020.

“Isaak has grown to up to 6-foot-3 over the last year,” said Rob Papineau, VP Hockey Operations & General Manager. “He combines size with athleticism and excellent skating ability. He has a big shot and plays a 200-foot game.”

“It has been a goal of mine to sign with the Wolves since I was drafted and meeting this is a dream come true,” said Phillips. “I am so excited to start to prove that I belong at this level and I can’t thank my parents and coaches from Stouffville enough for believing in me.”

Wawrow hails from Etobicoke, Ont. and is a graduate of the Brampton 45’s Minor Midget program where the Wolves selected him as a seventh round (127th overall) pick in 2017. The 5-foot-11, 185Ib. right-shot defender recorded 11 points (2-9–11) in his minor midget season before splitting this past campaign between the Toronto Titans Midget AAA team and the OJHL’s Brampton Bombers where he suited up in three games. He is eligible for the 2019 NHL Draft.

“Drew has an elite hockey mind and outstanding compete,” said Papineau. “He was the best defenceman in the GTHL Major Midget last season and has incredible character. Drew is very much driven to be a pro.”

“I am excited about the opportunity with the Wolves, but there is lots of work ahead,” said Wawrow. “I have to thank the team for believing in me and for all my minor hockey mentors growing up.  Mostly I have to thank my parents and grandparents for their constant support.”

Orangeville native Owen Robinson joins the Wolves from the Blind River Beavers of the NOJHL where he was named to the league’s second all-star team last season with 56 points (22-34–56) over 51 contests. He proceeded to add eight points (2-6–8) in as many playoff games and was selected by Sudbury in the 10th round (184th overall) of the 2018 OHL Priority Selection. The 2000-born winger is eligible for the 2019 NHL Draft.

“Owen had an outstanding rookie season with Blind River last year where he jumped onto everyone’s radar,” noted Papineau. “He combines skill and speed with the finesse and scoring ability needed to succeed at this level. Owen is a great example for all young hockey players in maintaining your focus to obtain your goals of playing in the OHL,” he added.

“I am very excited to have the chance to play with the Wolves, and can’t wait to get started,” said Robinson following today’s final Blue & White game.

A total of 29 players remain on the Wolves’ pre-season roster as the club prepares for its first exhibition game set to take place at home to the Ottawa 67’s on Friday.