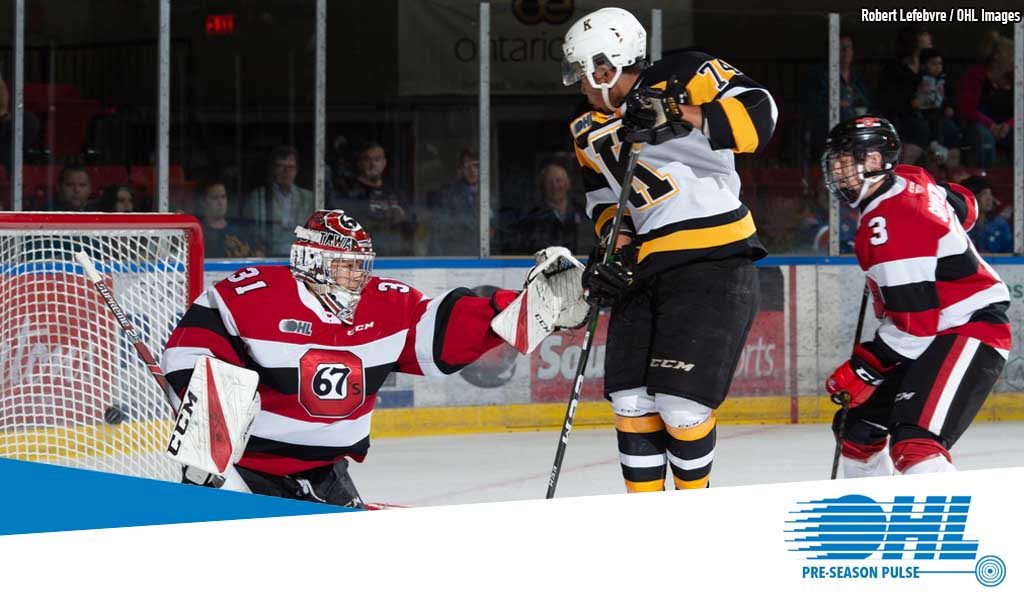 KINGSTON 8, OTTAWA 5 (IN CORNWALL)
The Kingston Frontenacs and Ottawa 67’s combined for 13 goals on 53 shots, with the visiting Frontenacs prevailing 8-5 in Cornwall, Ont. The Fronts led 5-1 just beyond the midway point of the first period before Ottawa made a game of things. Lucas Rowe scored a pair of goals for Kingston while Luke Drewitt and Zayde Wisdom each had a goal and an assist. Shane Wright found the back of the net for the Fronts in the win as they buried eight goals on just 24 shots. New Jersey Devils prospect Graeme Clarke was a bright spot for Ottawa, recording a goal and two assists while Marco Rossi and Thomas Johnston each had goal and a helper.
GAME CENTRE

OWEN SOUND 4, BARRIE 3
The Owen Sound Attack rebounded from a Sunday loss to the Barrie Colts, taking a 4-3 road win on Labour Day. Barrie native Barret Kirwin scored what stood as the game winner as the Attack victory was backed by a combined goaltending performance from Mack Guzda and Andrew MacLean. Kaleb Pearson had a goal and two assists while Griffin Wilson and Joshua Samanski also tallied. The Attack outshot the Colts 39-28 as Jet Greaves made 35 saves in the Barrie crease. Rookie defender Brandt Clarke followed up Sunday’s hat-trick with another goal while Trey Zagrzebski and Matej Pekar also lit the lamp.
GAME CENTRE