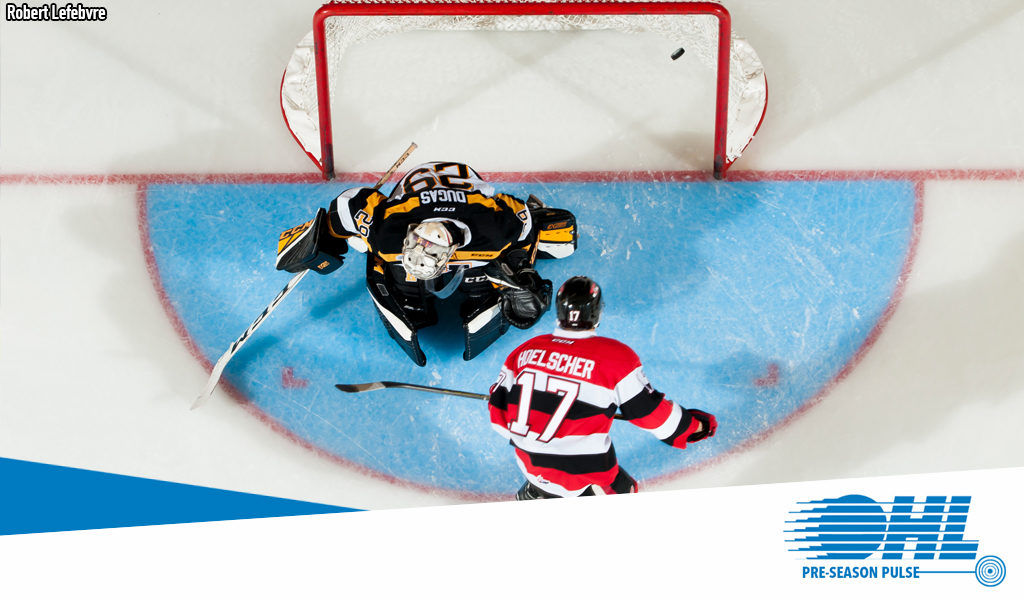 OTTAWA 3, KINGSTON 2 – SO (IN CORNWALL)
After 26 years, OHL hockey made its return to Cornwall on Monday afternoon and the Ottawa 67’s and Kingston Frontenacs made it a good one. New Jersey Devils prospect Mitchell Hoelscher scored in the seventh round of the shootout to give Ottawa a 3-2 win. Ottawa goaltender Cedrick Andree stopped all seven shooters he faced, turning aside Kingston’s Matt Hotchkiss to secure the victory as the 67’s improve to 3-0. Ottawa rookies Cameron Tolnai and Marco Rossi also scored for the 67’s while Kingston goals came from Ryan Cranford and Brett Neumann.

MISSISSAUGA 5, GUELPH 2
Michael Little and Sam Meisenheimer both scored twice as the Mississauga Steelheads defeated the Guelph Storm 5-2 on the road. Rookie forward Michael Stubbs also lit the lamp for the Trout while goaltender Matthew Dunsmoor made 16 saves in his hometown. Cole Carter picked up two assists on the afternoon as Mississauga outshot Guelph 35-18. Rookie defenceman Luka Profaca and Russian winger Alexey Toropchenko both scored for Guelph while Anthony Popovich stopped 19 of the 20 shots he faced out of the gate. The Steelheads and Storm are both 1-1 in exhibition play.
GAME CENTRE

OWEN SOUND 6, BARRIE 4
The Owen Sound Attack held off a Barrie Colts comeback attempt late to take a 6-4 road win. Daylon Groulx and rookie Griffin Wilson both scored twice while other goals came from Chase Campbell and Jackson Doherty. Cade Robinson picked up three assists on the night while Maksum Sushko and Sean Durzi added two. Ryan Suzuki scored twice for Barrie while Jason Willms and Nathan Allensen scored other markers. Owen Sound outshot Barrie 33-26 as goaltenders Andrew MacLean and Mack Guzda shared the load in goal to collect the win. The Attack improve to 2-0 in the pre-season while Barrie sits at 1-1.
GAME CENTRE

If anybody wants to see the 7 round shootout from today’s @Ottawa67sHockey and @KingstonFronts game in @TourismCornwall, I captured the whole thing. Definitely some nifty moves and saves. https://t.co/wFCxcn4QX7

Not a bad crowd in Cornwall as the 67’s host the Kingston Frontenacs. Looking forward to seeing the line of Bitten, Rossi and Quinn together. They were great during the training camp game. pic.twitter.com/AHMElwmjuP