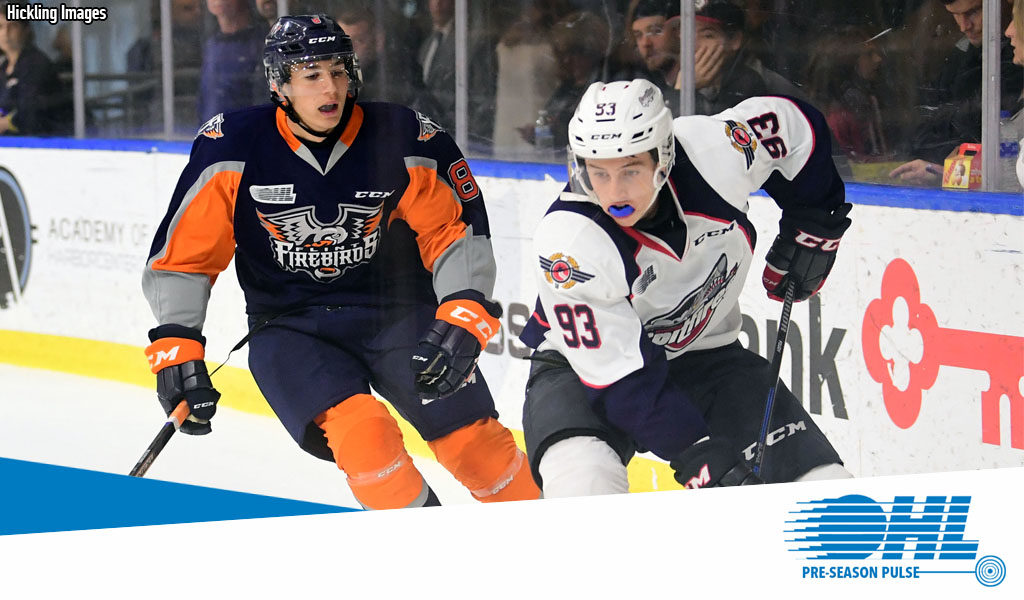 WINDSOR 7, FLINT 4
Tied 3-3 after one period, the Windsor Spitfires outpaced the Flint Firebirds the rest of the way in a 7-4 victory at HarborCenter. Blueliner Lev Starikov scored twice while overage forward Luke Kutkevicius had a goal and two helpers. Curtis Douglas and Will Cuylle each picked up their third goal of the weekend while Windsor markers have from rookies Kyle McDonald and Jean-Luc Foudy. The Flint unit of C.J. Clarke alongside Ty Dellandrea and Jack Wismer connected on back-to-back first period shifts with Clarke providing the finish. Wismer and Eric Uba scored other goals for the Firebirds as they were outshot 29-18. Kari Piiroinen earned the win for Windsor with a 14-save performance while Evan Morrison and Luke Cavallin split time in goal for Flint. The Spits wrap up the weekend with a perfect 3-0 record while Flint played to a 2-1 mark.
GAME CENTRE

ERIE 2, HAMILTON 1
The Erie Otters carried a 2-1 lead into the first intermission and that’s how things would remain as Erie goaltender Daniel Murphy was a difference-maker with 27 saves. Christian Girhiny and Jack Duff scored first period markers for the Otters as they snuck past Hamilton despite being outshot 28-18. Matthew Strome’s third of the weekend was the lone goal for the Bulldogs. Erie wraps things up in Buffalo with a 1-2 record while Hamilton went 0-3 on the weekend.
GAME CENTRE

2 goals from @71starikov and a big game from @lukekutkevicius (1G, 2A) leads Spits to a 7-4 win over the @FlintFirebirds and a sweep of OHL Showcase event in Buffalo. Lots of positives with a 17-goal outburst in three games.

SAGINAW 3, MONCTON 1
The Saginaw Spirit wrapped up a perfect 3-0 showing at the Kitchener Rangers Pre-Season Showcase, defeating the Moncton Wildcats 3-1 on Sunday afternoon. Brady Gilmour had a goal and an assist, scoring the game winner with 4:51 left in the third period. Rookie defenceman Mason Millman also scored for the Spirit while DJ Busdeker added an empty netter. Jordan Spence provided Moncton’s only goal as the QMJHL’s Wildcats went 0-3 in Kitchener. Saginaw outshot Moncton 46-30 as Spirit netminder Cameron Lamour made 29 saves.
GAME CENTRE

KITCHENER 4, NORTH BAY 3
The North Bay Battalion poured it on late, outshooting the Kitchener Rangers 20-5 in the third period but the Blueshirts came away victorious by a score of 4-3. Down 4-1, the Troops added late goals from Justin Brazeau and Matthew Struthers but came up short as Kitchener netminder Luke Richardson made 39 saves on the afternoon. Rickard Hugg, Joseph Serpa, Greg Meireles and Riley Damiani scored for Kitchener while rookie Carter Tresoor picked up a pair of assists. Brazeau scored twice and added an assist for North Bay as the Battalion outshot Kitchener 42-33. Kitchener finishes the weekend with a 2-1 record while North Bay sits at 1-2.
GAME CENTRE

And that’s a wrap! The #Spirit finish out the weekend strong with a 3-1 victory over the @monctonwildcats of the @QMJHL #SoarWithUs pic.twitter.com/9k1HNL6NRB

PETERBOROUGH 6, OSHAWA 5 – SO
A back-and-forth matchup between two rivals ended with the home side scoring a 6-5 shootout win. The Peterborough Petes emerged victorious in a chippy affair with the Oshawa Generals as Brady Hinz netted the fifth round shootout winner. Down 4-2 after two, the Petes turned things on in the third as Semyon Der-Arguchintsev, Adam Timleck and Hinz scored three times in six minutes to give the Petes a 5-4 edge. Generals newcomer Nando Eggenberger completed a hat-trick with 1:23 left in the third period to force a shootout. Peterborough netminder Hunter Jones stopped all five shooters he faced to backstop the Petes to victory. Zach Gallant and Pavel Gogolev added Peterborough goals while Jack Studnicka and Allan McShane also scored for the Generals as they were outshot 39-25.
GAME CENTRE

OTTAWA 4, KINGSTON 2
The Kingston Frontenacs took out a 2-0 lead but that’s all the offence they’d manage as the Ottawa 67’s roared back for a 4-2 road win. San Jose Sharks prospect Sasha Chmelevski and Washington Capitals second round pick Kody Clark each scored twice while Tye Felhaber and Marco Rossi each tallied two assists. The 67’s were backstopped by rookie goaltender Will Cranley who stopped 25 of the 27 shots he faced. Matt Hotchkiss and newcomer Ian Derungs lit the lamp for the Frontenacs while Brendan Bonello made 25 saves in the loss.
GAME CENTRE

OWEN SOUND 5, SUDBURY 3
Newly signed rookie Kaleb Pearson scored twice and added two assists as the Owen Sound Attack powered past the Sudbury Wolves 5-3 on home ice. Pearson’s line alongside Nick Suzuki and Kevin Hancock did some damage on Sunday afternoon as Suzuki scored and had two assists while Hancock also finished with a goal and two helpers. Daylon Groulx rounded out the Attack scoring summary as they outshot the Wolves 35-28. Macauley Carson, Blake Murray and Liam Ross scored for Sudbury as Mack Guzda and Nathan Torchia combined for the Attack win.
GAME CENTRE

A fast, physical high-scoring affair resulted in a 6-5 shootout win for your Petes over the Gens!