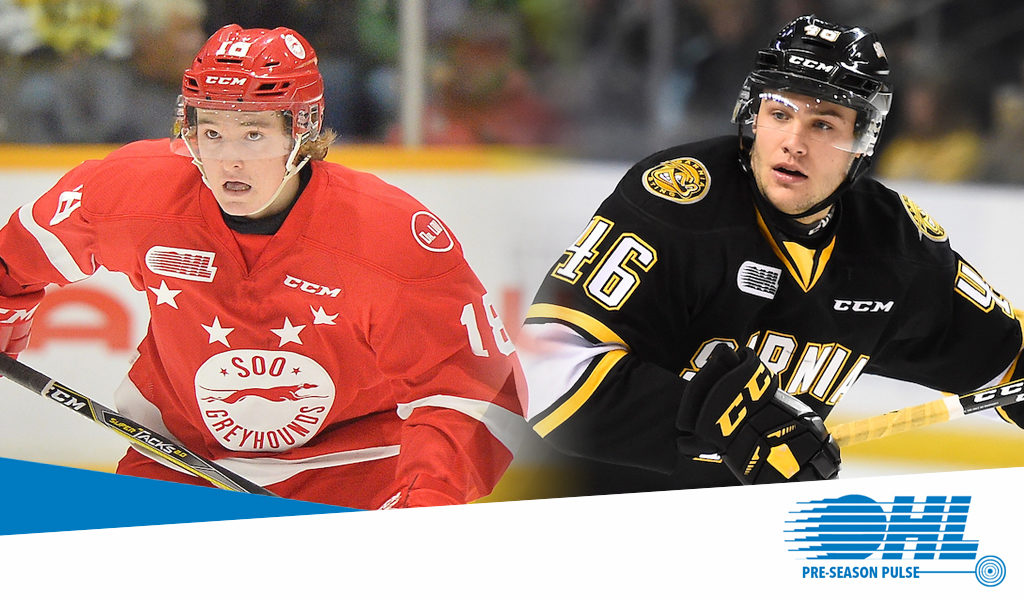 SAULT STE. MARIE 4, SUDBURY 3 – SO
The Soo Greyhounds opened their OHL Pre-Season on a winning note as sophomore forward Zack Trott scored twice in a 4-3 shootout road win over the Sudbury Wolves. Sudbury controlled the shot clock, outdoing the Greyhounds 40-23 but freshman goaltender Ethan Taylor turned aside 17 of the 18 shots he faced before Tyler Johnson took over to provide 20 saves of his own. Rookie forward Dominic Mufarreh joined Joe Carroll with shootout goals for the Greyhounds while Alex Johnston joined Trott on the scoresheet in regulation. Sudbury countered with goals from Eric Eschweiler, Quinton Byfield’s first in a Wolves uniform as well as a marker from sophomore Anthony Tabak. Jake McGrath stopped 20 of the 23 shots he faced in the loss. The Wolves fall to 0-3-1 in the pre-season.
GAME CENTRE

Muffareh takes the ice … WHAT A GOAL, fake forehand to the backhand upstairs! ✅

PETERBOROUGH 5, KINGSTON 4 – SO
Nick Robertson and Brady Hinz joined forces to lift the Peterborough Petes over the Kingston Frontenacs 5-4 in a shootout on home ice. The two Petes forwards scored in regulation before adding shootout goals to secure the victory as they outshot their East Division rival 45-27. Overage forward Adam Timleck also had a goal and assist for Peterborough while Chad Denault added the additional marker. Down 4-2 early in the third, Kingston battled back to tie on goals from Swiss newcomer Ian Derungs and overage flank Ryan Cranford. Peterborough’s Tye Austin stopped both Conor Ali and Tyler Burnie in the shootout to slam the door on the victory. The Petes improve to 2-1 in exhibition play while Kingston sits at 1-0-2.
GAME CENTRE

SARNIA 4, WINDSOR 1
Big Swedish winger Hugo Leufvenius scored twice while Theo Calvas and Curtis Egert added goals to lead the Sarnia Sting to a 4-1 road win in Windsor. Cole Purboo put the Spits up 1-0 with 30 seconds left in the opening period, but that’s all the offence Windsor would muster as Ethan Langevin and Blair Coffin combined to make 22 saves in the Sarnia crease. Rookie Kari Piiroinen turned aside 29 shots for Windsor. The Spits’ first loss of the pre-season sees them fall to 3-1-0 while Sarnia improves to 1-2-0.
GAME CENTRE

Pre Season Game Report | Hugo Leufvenius scores a pair in the third to lead Sting past the Spits on Thursday Night!

NIAGARA 3, BARRIE 1
Swiss newcomer Kyen Sopa scored the power play game winner with 2:44 left in the second period as the Niagara IceDogs skated past the Barrie Colts 3-1 on the road. Oliver Castleman and Billy Constantinou added Niagara goals while Colton Incze turned aside 26 of 27 shots he faced. Barrie’s lone goal came from Aidan Brown while Kai Edmonds stopped 27 shots in the Colts crease. The IceDogs went 2-for-8 on the power play to Barrie’s 0-for-3 mark. Niagara is now 1-1 in pre-season play while Barrie sits at 2-2.
GAME CENTRE