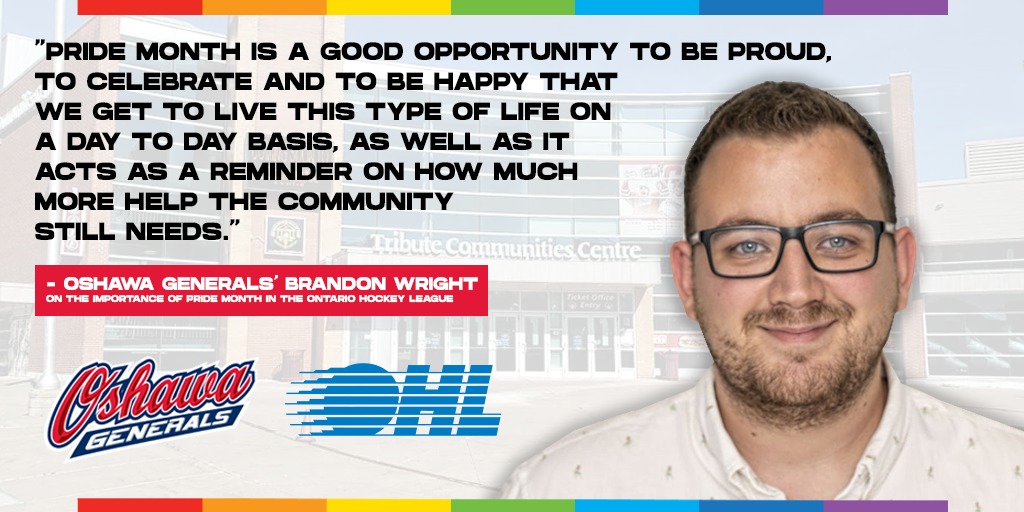 The Ontario Hockey League is proud to join communities across the Canadian Hockey League in celebrating and recognizing Pride Month. I sat down with Brandon Wright of the Oshawa Generals to learn more about his background with the Generals, being a member of the LGBTQ+ community and the importance of Pride Month. Brandon serves as the Social Media, Game Presentation and Media Relations Manager for the Generals.

JW: What sparked your interest in becoming a part of the Ontario Hockey League with the Oshawa Generals?

BW: My entire family has been coming to Generals games forever. My grandparents have been season ticket holders since Bobby Orr joined Oshawa, and my parents got engaged at a Generals game back when they were playing at the Civic Auditorium. I’ve basically been going to Generals games since the moment I was born, and then when I decided that I wanted to get into journalism and media studies at Durham College, I saw that the Generals had posted a social media internship, and that’s where it kind of all started for me. A position later opened up and worked out for me to join the team full-time.

JW: What is your favourite part about working for the Generals?

BW: I would say the community aspect of it. Everyone always talks about how the OHL is community driven, it’s cliché but it honestly is like a family. I spend most of my days and nights with the same 10 to 15 people producing the games and working in the office every day. I would do anything for the people in here because we all know that at the end of the day, we have the same common goal of seeing the organization succeed. It’s also nice to be able to actually get to know the players outside of hockey. You get to know them and you get to hear their stories, because sometimes you forget that they’re kids and there’s more to them than just what you see on the ice. You don’t get to experience that side of the players until you’re here every day working with them.

JW: What does Pride Month mean to you?

BW: Pride Month is celebration. It’s acknowledgement. It’s empowering queer people, gay people, we have a lot of things to be proud of and celebrate regarding how far things have come from blatantly not having any rights at all, to where we are now in society. That doesn’t mean there isn’t a lot more that needs to be done, but I think I’m very privileged in the sense that I can look at Pride Month as an opportunity to just continue living my life not being afraid anymore. I know a lot of people in our community don’t get to acknowledge Pride Month that way and I think that it is evident that we as a society need to keep going. But for me personally, Pride Month is a good opportunity to be proud, to celebrate and to be happy that we get to live this type of life on a day to day basis, as well as it acts as a reminder on how much more help the community still needs.

JW: How has being a part of this community enhanced your role in the hockey industry to make the league more inclusive?

BW: I take it really seriously. When I was in college I spoke to Brock McGillis about how I was wanting to work for the Generals one day, and how I could use that to my advantage, as well as make it an advantage to the community. Something that he said to me that really stuck out was that it isn’t my responsibility to come into the League and fix it, but it is part of my responsibility to come in and just make it a better place for everyone. What I resonated a lot with is that it’s not a person’s job to make straight people comfortable with us, it’s more so that we can just come in and exist in spaces that we don’t typically exist in or have much representation. By just being here, we can start trailblazing and start making it more common for us to be in these spaces.

I have a giant pride flag hanging right on my wall in my office, and it’s a conversation piece because someone will come into my workspace, look at it, and then a conversation sparks. I think by just being here, it’s going to make it easier for the next person when I leave to walk in. It’s just going to be yes; this person works here.

JW: what are some initiatives or events that the Generals have held to represent the community?

BW: When I was an intern, my predecessor Jessica, she hosted the Generals’ first ever Pride Night. I remember being in the office and there was pushback because of the type of city Oshawa is, and the traditional aspect of our season ticket holders. Thankfully, it was so well received that when I took over this position, it wasn’t even a question as to if we were going to do it again. I knew I wanted to take it to the next level.

For our Pride Night this year we had pride tape, as well as helmet decals made for all of our players with a special logo that was also used on the game clock throughout the entire game. My favourite part of the whole night was that I had a drag queen from Canada’s Drag Race come do the ceremonial puck drop. People were shocked that the Generals were able to bring in an icon from queer spaces and integrate her into being a part of hockey. It blew up on social media and demonstrated that two worlds that we thought would never collide were finally able to.

The other big part about it was that we designed custom pride shirts this year. My graphic designer Paul and his intern Alex took pictures around the Tribute Communities Centre of things that matched pride colours, and then we organized them on the t-shirt to basically create the pride flag. It was our way of combining hockey and pride in the same space. All the proceeds from the shirts we sold were donated to PFLAG Durham.

JW: What are different ways that people and fans across the League can recognize Pride Month?

BW: Similar to what you and I are doing right now, just talking about it. I don’t necessarily think that talking about it is going to solve any problems, it would be nice if we didn’t need to have a month dedicated to celebrating gay people, but right now it’s necessary and that’s a good thing. I think that the more people continue to talk about it, the more normal the conversation becomes. Eventually, I don’t want to have to talk about being gay and working in hockey because it shouldn’t be a big deal, but I think to get there, we need to have these types of conversations because people need to know that people like me exist in this space and exist in this League. I think that familiarity and acceptance comes along with just having it be a part of our day to day lives and not come as such a shock anymore, so I believe that when it comes to fans, or even other OHL teams, just be open to letting these people into your spaces.

It’s also always important to be thinking ahead. Planning now for next year, what am I going to do to take that next step again? What kind of educational aspects am I going to bring into Pride Night? What can all OHL teams do? Coming together unified and sticking together, as well as using resources is important. Working with the OHL’s Director of Diversity and Inclusion, Rico Phillips, has been fantastic and I think a lot of the teams should be taking advantage of his knowledge and his advocacy across the League. I know a lot of teams bring in Brock to do guest speaking events with the players and I think that is super important as well. So finally, I think when it comes down to it, just being open to talking about it. There’s nothing wrong with talking about it and learning what those next steps are to make the OHL community a more inclusive space.