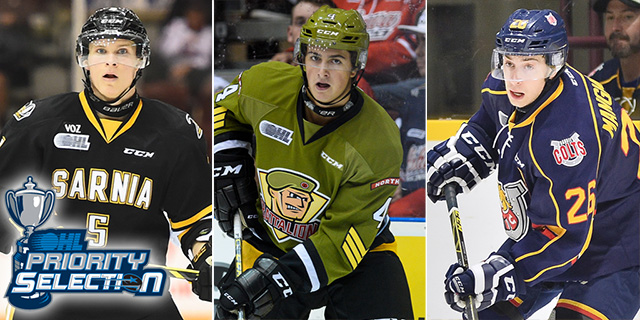 Aside from the OHL Championship and the MasterCard Memorial Cup, the OHL Priority Selection and the days leading up to it are the most important period on the OHL calendar.

For teams it’s a day where foundations are built, new talent is brought in and depth charts are assessed.

For the young players it’s a new beginning, a chance to make an impression and be provided an opportunity to take the next step in their hockey careers.

Regardless of the outcome of Saturday’s 2016 OHL Priority Selection, prospects can draw from a number of different examples of how current day OHL’ers have taken different paths to success in their young careers.

The most publicized and well-traveled route to stardom has often come in the early portions of the OHL Priority Selection, evidenced by 2014 first overall pick Jakob Chychrun of the Sarnia Sting.

The native of Boca Raton, Florida, spent his Minor Midget season with the GTHL’s Toronto Jr. Canadiens. Two years into his OHL career, the draft eligible Chychrun was recently named to Canada’s preliminary roster for the 2016 World Under-18 Hockey Championship in Grand Forks, North Dakota.

“I knew I wanted to play in the OHL before I came to Toronto and had a very memorable season in the GTHL, a great league with a lot of highly skilled players,” he said. “The draft and the entire process leading up to it was unforgettable. I remember when my dad and I took a trip to Sarnia to take in a game and the atmosphere was just tremendous. I’ll never forget hearing my name called on draft day.”

Chychrun has quickly earned the reputation of being one of the OHL’s premier blueliners, setting himself apart with his intriguing blend of speed, strength and two-way awareness.

Another defenceman, who was a lesser-known before bursting onto the OHL scene as a rookie this past season is North Bay Battalion rearguard Cam Dineen, a native of Toms River, New Jersey.

Dineen was selected 213 picks after Chychrun in the 2014 OHL Priority Selection, going to the Battalion in the 11th round, 214th overall.

After a year of development in New Jersey as a 16-year-old, Dineen came to the OHL and led rookie defencemen in scoring with 13 goals, 46 assists and 59 points in 68 games this past season.

“I hadn’t really spoken to many teams in the days leading up to the draft,” said Dineen, who had competed in the 2014 OHL Cup with Elite Hockey Group. “I didn’t know a lot about the league before my draft year, but my agent encouraged me to explore the OHL. I was really excited to get drafted even though it was down in the 11th round. (Battalion Assistant GM) Matt Rabideau called my dad about 10 minutes after I was picked and I knew it would be a big opportunity.”

To say Dineen made the most of that opportunity would be an understatement. The smooth-skating 5’11”, 182Ib. defenceman is a prime candidate for the 2016 NHL Draft in Buffalo this June.

“I came into this season not really knowing what to expect,” he said. “I just wanted to play my best and keep developing. I figured I wouldn’t play a ton but just wanted to work hard for my minutes. My hard work has paid off though and I’m feeling right at home here in North Bay.”

Dineen joins a number of other recent OHL talents in Joseph Blandisi and Nick Paul (both drafted out of Major Midget), Malcolm Subban (11th round, 2009) and Eric Locke (13th round, 2009) in taking a less-traveled path to prominence.

While names such as Dineen have been provided an extra year of development or taken in a late round of the OHL Priority Selection, other prospects get overlooked altogether.

Andrew Mangiapane, who recently signed an NHL contract with the Calgary Flames, made the jump to the OHL after making the Barrie Colts out of training camp in September 2013.

The Bolton, ON, native had to deal with the disappointment of being passed over in the 2012 OHL Priority Selection.

“That wasn’t a good feeling,” he said. “I put up decent numbers in my Minor Midget year and thought there was a chance I could get taken, but it didn’t work out. I went back and played a year of Midget for the Toronto Jr. Canadiens under Jeff Angelidis and he really believed in me.”

Mangiapane’s first exposure to the Colts came at a hockey skills camp in Wasaga Beach during the summer of 2013. His speed and puck skills caught the eye of Colts assistant coach Todd Miller.

“Yeah I got my invitation to Colts training camp through my time at that skills camp and from there things really took off,” he reflected. “The scouts were surprised, the coaches were surprised, heck I was surprised with the way I performed at training camp. I just kept looking forward and I can only thank my coaches and my family who believed in me when nobody else seemed to.”

“The Colts took a chance on me and I’m thankful to Dale (Hawerchuk) and the coaching staff for doing that.”

Mangiapane is joined by other examples of undrafted talent in 2015 CHL Rookie of the Year Alex DeBrincat of the Erie Otters and 2015 MasterCard Memorial Cup champion Anthony Cirelli of the Oshawa Generals.

A Tampa Bay Lightning prospect, Cirelli scored the overtime winner in the MasterCard Memorial Cup Championship game last spring, lifting the Generals to their first title since 1990 in a 2-1 win over the Kelowna Rockets.

Chychrun, Dineen and Mangiapane, regardless of their draft position, all had one thing in common; they were given a chance.

For the countless draft hopefuls who wake up on Saturday for a day filled with anticipation, excitement, and in some cases disappointment, these players are great examples of how the path to eventual success can take many different roads.