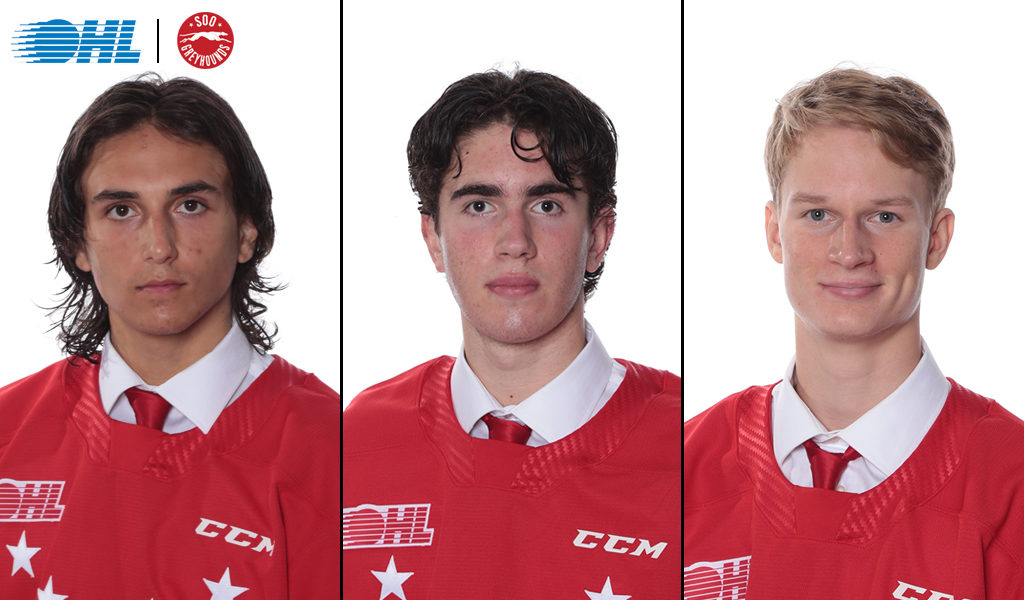 The Soo Greyhounds announced the commitments of three prospects in the past week, adding blueliner Andrew Gibson along with goaltenders Charlie Schenkel and Samuel Ivanov to the Program.

A 16-year-old right-shot defenceman from LaSalle, Ont., Gibson was selected by the Greyhounds in the fourth round (67th overall) of the 2021 OHL Priority Selection. The 6-foot-3, 188Ib. rearguard is a graduate of the Windsor Jr. Spitfires U16 program.

“Andrew had a very strong training camp with us – each day improving as he got more comfortable,” said Greyhounds GM Kyle Raftis. “One of his biggest strengths is on the defensive side of the puck. He’s a skilled skater who uses his physicality and long reach to break up plays and activate the attack. We are really impressed with his efficiency in moving the puck and his ability to add to his teams offensive attack.”

“It is an honour to sign with and be a part of such a great organization,” said Gibson. “I know the Soo is a great hockey city with an amazing fan base. I cannot wait to take the ice with a Greyhounds jersey on.”

The Hounds also received a commitment from fifth round (91st overall) 2020 OHL Priority Selection choice Charlie Schenkel in the crease. The 6-foot-5, 193Ib. goaltender was selected from the Rockland Nationals U18 program where he posted a 14-4-2 record with a 2.08 goals-against average and .924 save percentage in 22 games during the 2019-20 season.

“Charlie was extremely motivated coming into training camp this year,” said Raftis. “He’s a confident goaltender and based on raw skill alone – athleticism, size and ability to play the puck and command the ice – we think he’s just scratching the surface of how good he can be in our league.”

Schenkel, a 17-year-old product of Ottawa, Ont. who catches right-handed, spent the 2020-21 season at Kimball Union Academy in New Hampshire, posting a 2.62 goals-against average and .887 save percentage in four games.

“I’m extremely grateful for the opportunity to play for the Soo Greyhounds,” said Schenkel. “The people of Sault Ste. Marie have energy, grit and passion for hockey.  I immediately felt at home as soon as I entered the GFL Memorial Gardens.  Thank you to the fans, the Greyhounds staff and my billet family for making me feel so welcome.”

Joining Schenkel in the crease is first round (4th overall) 2020 OHL U18 Priority Selection choice Samuel Ivanov who also signed a standard player’s agreement. The 6-foot-3, 165Ib. netminder hails from Richmond Hill, Ont. and last competed for the Vaughan Kings U18 program in 2019-20, going 13-7-5 with a 1.96 goals-against average, .903 save percentage and one shutout in 25 games.

“We feel Sam is a great asset to our group,” said Raftis. “He’s a naturally gifted goaltender and keeps adding layers to his game. Sam’s big and mobile – he has quick reflexes and athleticism which give him all the tools to be successful in the crease.”

“I am very excited to join this amazing organization and be able to come to the rink everyday wearing the red and white. There is a winning and hard working culture in this city and I am honoured to be able to share that experience with all the other young men on the team.”

The Hounds are back at it on Saturday, September 25th in pre-season action at home to the Sudbury Wolves at 7:07pm.