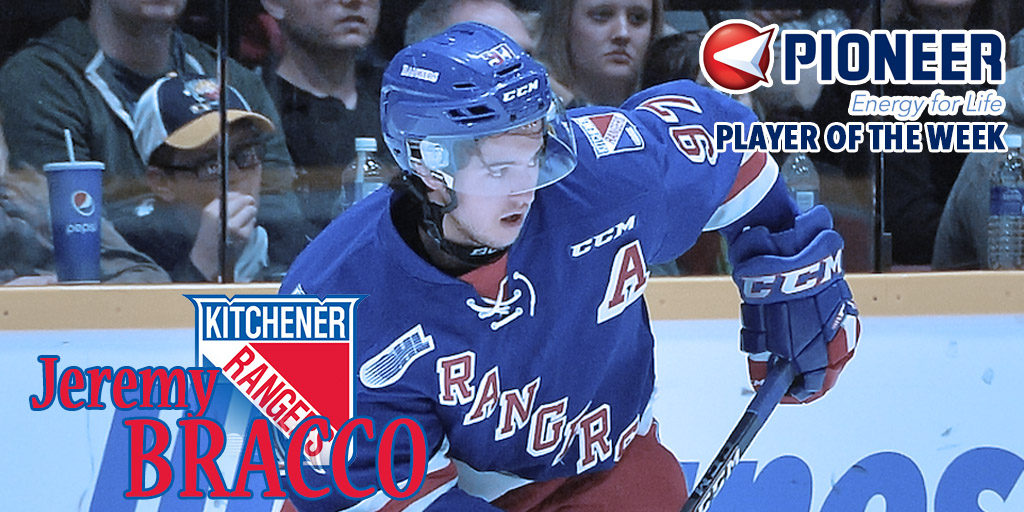 Toronto, ON – The Ontario Hockey League today announced that Toronto Maple Leafs prospect Jeremy Bracco of the Kitchener Rangers is the Pioneer Energy OHL Player of the Week for the week ending November 20 recording 10 points in four games scoring five goals and five assists with a plus-minus rating of plus-8.

Bracco earns the award for a second time this season after extending his season-long point-streak to an OHL-best 19 games as the Rangers won three of four games last week.  His week included two four-point performances Thursday night with a hat-trick and assist in a 7-4 win over the Peterborough Petes, and Sunday afternoon with two goals and two assists as first star of a 6-3 win over the Guelph Storm.  Bracco also tallied an assist last Tuesday in a 4-3 loss to the London Knights, and another helper Friday as part of a 3-2 win over the Oshawa Generals.

A 19-year-old from Freeport, NY, Bracco is playing in his second OHL season with the Rangers and was a second round pick of the Leafs in the 2015 NHL Draft.  He is currently third in OHL scoring with 40 points in 19 games including 16 goals and 24 assists after scoring 21 goals and 43 assists for 64 points in 49 games last season.  His assist on Friday against Oshawa marked his 100th career point with the Rangers.

Watch video highlights of Bracco and the Rangers against the Knights, Petes, Generals, and Storm.

Also considered for the award this week was Buffalo Sabres prospect Cliff Pu of the London Knights with four goals and five assists for nine points in four games, and fellow Ranger, Adam Mascherin, a Florida Panthers prospect who scored five goals and three assists for eight points in four games.  In goal, rookie Matthew Villalta of the Sault Ste. Marie Greyhounds went 2-0-0-0 with a goals-against-average of 2.00 and save percentage of .933.