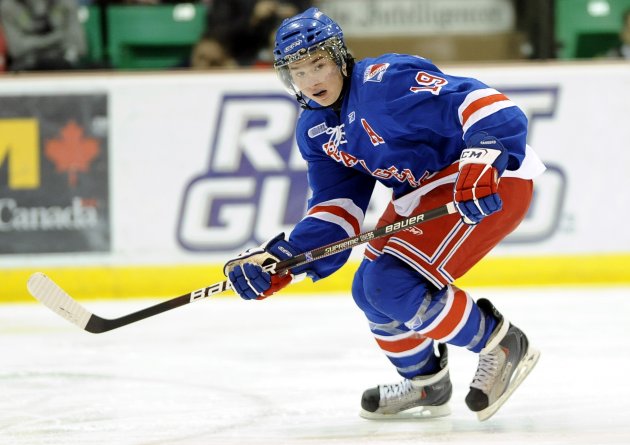 Toronto, ON – The Ontario Hockey League today announced that forward Jason Akeson of the Kitchener Rangers is the 2010-11 recipient of the Leo Lalonde Memorial Trophy as the OHL’s Overage Player of the Year.

Akeson tied for the OHL-lead in scoring with 108 points in 67 games.  He scored 24 goals and recorded a league-high 84 assists to establish a new Rangers’ record surpassing Dwight Foster who produced 83 assists in the 1976-77 season.  He capped off his four-year OHL career as a co-recipient of the Eddie Powers Memorial Trophy awarded to the league’s Top Scorer, also receiving the Jim Mahon Memorial Trophy awarded to the Top Scoring Right Winger shared with Tyler Toffoli of the Ottawa 67’s.  Akeson is the franchise’s third Leo Lalonde Memorial Trophy winner in the 28 years it has been presented following forward Joey St. Aubin in 1990-91, and defenceman Andre Benoit in the 2004-05 season.

“I am very thankful for the opportunities I have had with the Rangers,” said Akeson.  “I have had a memorable career in Kitchener and am grateful to the Rangers’ coaching staff for helping me excel and play my game at both ends of the ice in front of such a supportive fan base.  I am honoured to be named the league’s overage player of the year.”

A 20-year-old from Orleans, ON, Akeson was selected by the Kitchener Rangers in the sixth round of the 2007 OHL Priority Selection from the Cumberland Grads of the CCHL just one month before turning 17.  He made his Rangers debut in the second half of the 2007-08 season and played 16 playoff games for the OHL Champions.  He was named to the Second All-Rookie Team the following season with 64 points in 56 games, improving to 80 points in 65 games last season.  He was recognized by Western Conference Coaches as the Most Improved Player this season in the annual Coaches Poll recording 30 multi-point games including two six-point games to finish his OHL career with 254 points in 201 games.  In March, Akeson signed a three-year entry-level contract as a Free Agent with the Philadelphia Flyers.

“Jason should be an inspiration for all young players,” said Rangers General Manager and Head Coach Steve Spott.  “Jason was a mid round draft pick into the Ontario Hockey League and never drafted to an NHL team.  When Jason joined the Kitchener Rangers in 2008 he was on our fourth line and played as an energy player.  His hard work both on and off the ice, combined with his personal confidence has allowed him to become an impact player as an over age in the OHL.  We are proud that Jason has signed with the Philadelphia Flyers and will pave the way for future overage players in our league.”

The Leo Lalonde Memorial Trophy is awarded annually to the top overage player of the year as selected by OHL General Managers.  Teams were not permitted to vote for players from their own hockey club. Players received five points for a first place vote, three points for a second place vote and one point for a third place vote.

Akeson finished the voting process with 78 points ahead of Phil Varone of the Erie Otters who finished second with 38 points.  Defenceman Marc Cantin of the Mississauga St. Michael’s Majors finished in third with 30 points.

Akeson will be formally presented with the Leo Lalonde Memorial Trophy at the 2010-11 OHL Awards Ceremony scheduled for June 8 at the Hockey Hall of Fame in Toronto.