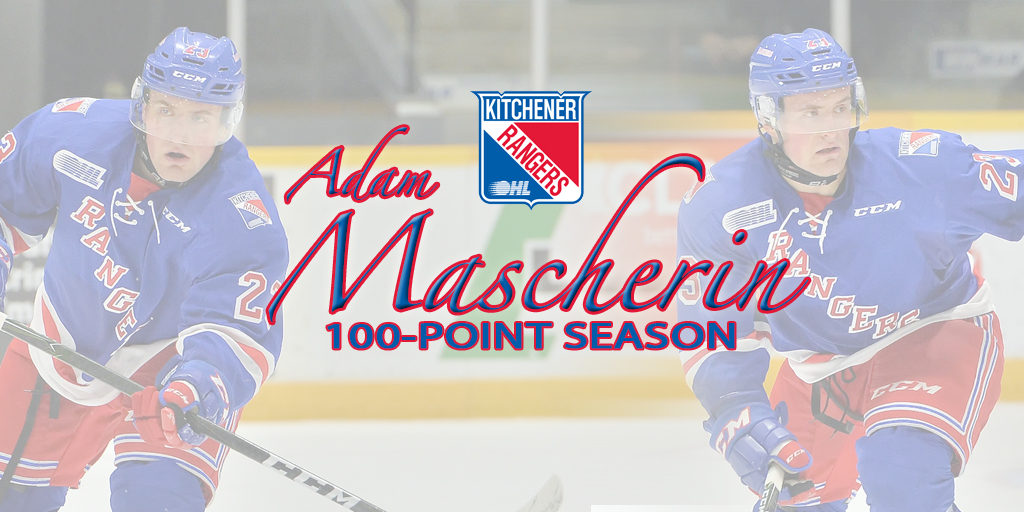 Florida Panthers prospect Adam Mascherin of the Kitchener Rangers became the third player to join the OHL’s century club for the 2016-17 regular season.

Third in OHL scoring, Mascherin finished the campaign recording his 65th assist in a 7-2 loss to the Owen Sound Attack on Saturday to go along with his 35 goals in 65 games.

The 18-year-old from Maple, Ont., becomes the first blueshirt to tally 100 points in a season since Jason Akeson shared the league’s scoring title with Tyler Toffoli of the Ottawa 67’s each with 108 points during the 2010-11 season.  Akeson’s totals included 24 goals and a league-high 84 assists.

Mascherin was the second overall pick in the 2014 OHL Priority Selection after earning GTHL Player of the Year honours with the Vaughan Kings and in three career seasons with the Rangers has produced 210 points in 192 games.  The forward was recently voted second in the Western Conference OHL Coaches Poll in Most Dangerous in the Goal Area, Best Shot, and Hardest Shot categories.  He was chosen by the Panthers in the second round of the 2016 NHL Draft.

One of the many leaders on the Rangers this season, Mascherin recently joined Terry Doyle on OHL News – Radio Edition to chat about the playoff push and his experiences at OHL Cup.

The Rangers are sixth in the Western Conference standings with a 36-27 -3-2 record and will face the Owen Sound Attack in the first round of playoffs beginning Friday.