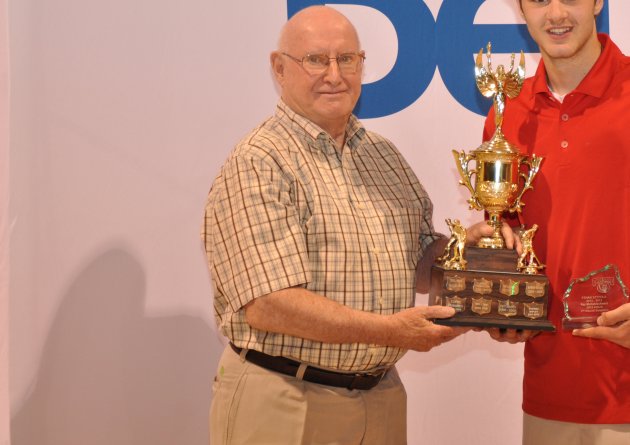 Toronto, ON – The Ontario Hockey League today announced that Owen Sound Attack Business Manager and former Owen Sound Platers Owner and General Manager Ray McKelvie is the recipient of the Bill Long Award for Distinguished Service which is presented in recognition and appreciation of outstanding contributions to the OHL.

McKelvie, a local businessman and accountant, was instrumental in the relocation of the Guelph Platers to Owen Sound partnering with the Holody brothers in 1989.  He also served as Owner/General Manager of the club beginning in 1992 overseeing the entire hockey and business operations of the team.  He maintained that position up until the summer of 2000 when the club was purchased by its current local ownership team and was renamed the Attack.

“Ray’s contribution to the Attack organization and OHL Hockey in Owen Sound is unmatched,” stated Attack Governor, Peter MacDermid.  “We could not think of a more deserving recipient of the Bill Long Award than Ray McKelvie and we are extremely thrilled that he is being honoured in this fashion by the Ontario Hockey League.”

For the last 13 seasons, McKelvie has remained an integral part of the day to day business operations of the team as the Attack’s Business Manager.  Each year the club presents their first round pick in the OHL Priority Selection with the Ray McKelvie Award, and the main lobby of the newly built Julie McArthur Regional Recreation Centre was also named after Ray McKelvie and his family for their contributions to hockey in the community.

“Markets like Owen Sound are the foundation of the Ontario Hockey League,” said OHL Commissioner David Branch.  “Ray’s passion for our league and his community has helped hockey fans in Owen Sound enjoy our great game.”

A native of Dundalk, ON, McKelvie is the 19th recipient of the award which was initiated in 1989 to commemorate the efforts and contributions of Bill Long during his days in the Ontario Hockey League, spanning over three decades as a coach and manager of the Niagara Falls Flyers, Ottawa 67’s and London Knights.

Plymouth Whalers Peter Karmanos Jr. was the last Bill Long Award recipient in 2010, following long-time OHL Officiating Manager Sam Sisco and Bert O’Brien of the Ottawa 67’s who each received the award in 2009.  Past recipients also include Brian Kilrea in 1994 and Sherwood Bassin in 1990.

McKelvie will be presented with the Bill Long Award at the OHL Awards Ceremony on Tuesday June 4 at the Hockey Hall of Fame.