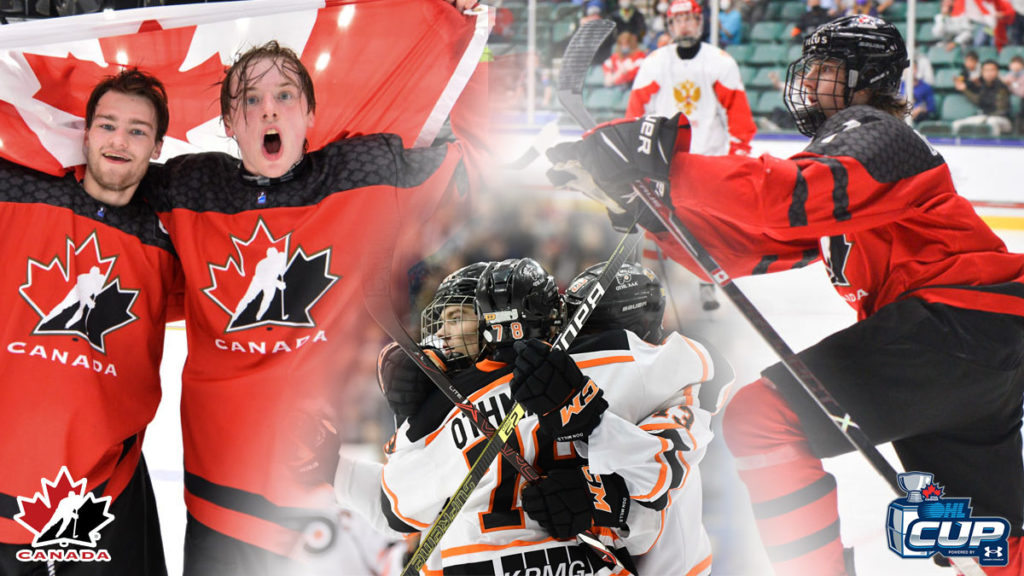 A trio of reigning OHL Cup champions have been named champions together once again – this time, in front of an international audience.

Over two years removed from winning the club’s first ever OHL Cup title in sensational fashion, Don Mills Flyers graduates Shane Wright, Brennan Othmann and Brandt Clarke were among the 13 OHL players who helped Canada to a gold medal finish at the 2021 IIHF World Under-18 Hockey Championship in Frisco, Texas, sealed with a 5-3 win over Russia.

Heading into the much-anticipated tournament, Clarke expressed his excitement in being selected to Canada’s roster along with his former teammates.

“Just being able to play with some of those guys again, Shane and Otts, it’s pretty special,” said the Barrie Colts defenceman. “They have a pretty special chemistry too so if I can just pass the puck up to them maybe they can put it in the back of the net for me like it used to happen in Don Mills.”

“Enjoy every second of it…don’t take any shift for granted.”

The Canadian boys certainly didn’t have any issue finding the back of the net; their gold medal victory – a first since 2013 – rounded out a perfect 7-0 tournament over which they outscored their opponents 51-12.

“Obviously [Othmann] is really fun guy to play with. He thinks the game at such a high level. He makes such nice plays and plays hard as well,” said the Kingston Frontenacs star following their defeat of Russia, over which he contributed two goals and one helper. “He may not be the biggest guy physically and weight-wise, but he’ll throw his body around and he’ll get in the other guy’s faces and he’ll do the dirty work for you. He’s a guy I love playing with.”

The three headed a commanding 2018-19 GTHL championship Flyers team and an OHL Cup finish for the books with chemistry that would pay off when it mattered most. The Flyers erased a 4-1 deficit to defeat the Toronto Red Wings 6-5 in overtime and the trio combined for the winner: Clarke fed the puck to Wright, who found Othmann backdoor for the clincher.

“We had a really special team on Don Mills, I was really fortunate to be part of such a great organization,” said Clarke.

Wright and Othmann led the showcase with 18 and 14 points respectively, while Clarke’s 11 points were the most by a defender in the tournament’s history. The three, of course, went on to head the 2019 OHL Priority Selection weeks later; a then 15-year-old Wright leading the way as the first overall choice to Kingston.

“Clarkey’s a special player as well. I was lucky enough to play with him in Don Mills for three years so got to know him and his game pretty well,” Wright continued following last week’s U18 Worlds win. “Obviously he’s gifted offensively, he can make so many nice plays in the o-zone. I think the biggest thing that gets overlooked when it comes to him is his stick and his work in the d-zone and I always say I hate going against him in practice because you can never get around him or through him. He has one of the best sticks I’ve ever seen in my life and he was obviously a great player for us.”

The OHL Cup showcase has since been cancelled twice due to the COVID-19 pandemic, which means that special Don Mills team still holds the most recent title. Government regulations amid the pandemic’s third wave ultimately led to the cancellation of the 2020-21 OHL season as well, meaning the three skaters haven’t been able to greet each other on the ice for quite some time.

So the opportunity to reunite on the world stage also meant an opportunity to hang out altogether as friends once again – something they were very much looking forward to after the year that’s been. In the end, a(nother) shared championship made it even better.

“Shaner and Otts are two of my best friends,” he said. “They’re just great guys off the ice and I’m really lucky to call them best friends. They’re terrific players, terrific people, we still talk every day even though I’m in Ottawa and they’re in Toronto. We were all pretty much best friends on that team.”