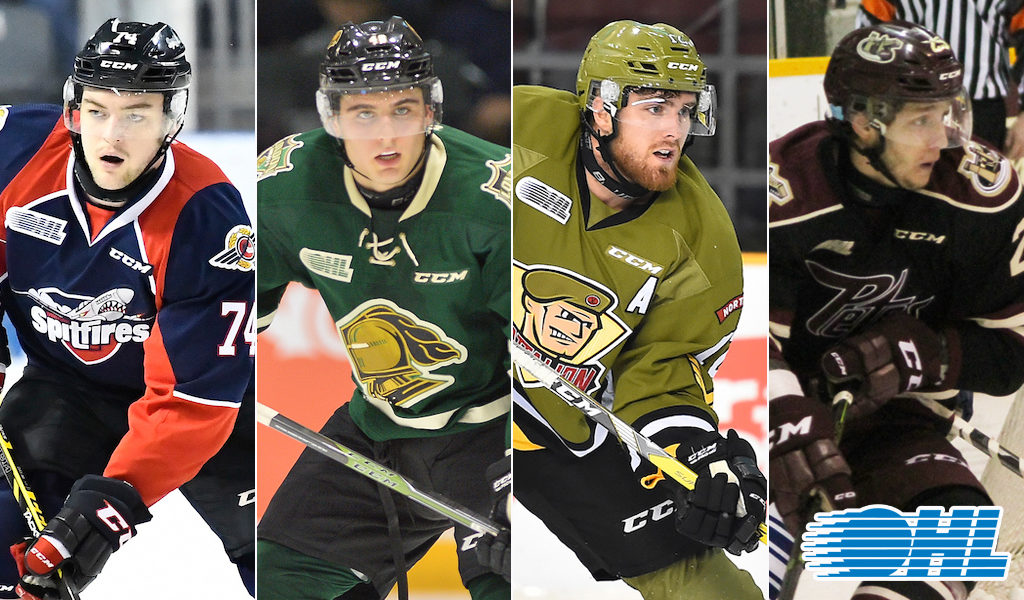 With Thanksgiving weekend upon us and the 2017-18 NHL season getting underway, depth charts throughout the professional ranks are being solidified and key players are on their way back to the Ontario Hockey League.

The first domino fell when the New York Rangers announced they’d be sending 19-year-old veteran Sean Day back to Windsor where he won a Mastercard Memorial Cup title last spring.

With four years of OHL action under his belt, Day qualified to remain with the American Hockey League’s Hartford Wolf Pack this season, but the Rangers opted to send their third round pick in the 2016 NHL Draft back to the Spitfires where he’ll continue his development under new head coach Trevor Letowski.

“People talk about defencemen taking longer,” Day told Jim Parker of the Windsor Star following the announcement. “In my exit interview earlier (Sunday with Rangers’ officials), they told me they want me to play 25-30 minutes a night and be the guy.”

Day returned to a young Spitfires blue line in Thursday’s 4-3 overtime loss to Sault Ste. Marie where he’ll carry the load on a team that is off to a 3-1-1-0 start.

Elsewhere in the Western Conference, the London Knights learned that they’ll have the services of 37-goal scorer Sam Miletic back in their lineup. The 20-year-old signed an entry level NHL contract with the Pittsburgh Penguins last week before attending training camp with the AHL affiliate Wilkes-Barre/Scranton Penguins.

The 1-4-0-0 Knights are hopeful that Miletic’s return along with the addition of recently acquired overage forward Tyler Rollo will give the club a shot in the arm offensively after scoring just 10 goals through their first five games.

“We feel our team is better than a 1-4 record,” London GM Rob Simpson told Ryan Pyette of the London Free Press. “We all need to have a stronger collective team effort. We see things improving. We’d just like to see it happen sooner than later.”

Miletic’s return gives the Knights a reprieve after the team learned that Vancouver Canucks prospect Olli Juolevi would be playing in Finland’s professional ranks this season while overage candidate Brandon Crawley has been assigned to the AHL’s Hartford Wolf Pack after signing with the New York Rangers.

Another team getting an injection of offence and experience up front, the North Bay Battalion have Vancouver Canucks prospect Brett McKenzie back for an overage season.

The first ever draft pick by the club following its relocation to North Bay, McKenzie attended Vancouver Canucks training camp before getting a look from the AHL affiliate Utica Comets.

North Bay’s top scorer last season, McKenzie made his season debut on Thursday as the Troops dropped a 3-1 decision to the visiting Barrie Colts.

“It was my goal to make the AHL but of course there are other guys that are higher ranked than I am that need those spots so it was just the luck of the draw and I got pushed down,” McKenzie told BayToday.ca’s Chris Dawson. “I am just going to try and come in here with a positive attitude and just help them out.”

The Troops have enjoyed a great start to the season thanks in large part to the outstanding play of current OHL scoring leader Luke Burghardt who was acquired from the Guelph Storm over the summer. His strong play along with a healthy and contributing Cam Dineen on the back end have the Battalion off to a 3-1-1-0 start.

It’s official! Nikita Korostelev is returning to the Petes for the 2017-18 season.

Another Eastern Conference team with high expectations, the Peterborough Petes got good news this past week when veteran winger Nikita Korostelev was sent back from Toronto Marlies training camp. Originally a seventh round pick by the Maple Leafs in 2015, the Russian-born winger also attended Toronto’s NHL training camp as a free agent invitee.

“I had a really great experience at Maple Leafs and Marlies camps, and I have nothing but great things to say about their organization,” Korostelev said to Mike Davies of the Peterborough Examiner.

“With that said, I’m excited to come back to Peterborough. In speaking with my agent and my family, this is the best decision for me, and I’m looking forward to working with my teammates to win more games and go deeper in the playoffs with the Petes.”

Korostelev returns to Peterborough where he’ll suit up alongside fellow countrymen Pavel Gogolev and Semyon Der-Arguchintsev, two players who were included in this past week’s NHL Central Scouting October ‘Players to Watch’ list.

Korostelev registered an assist in Peterborough’s 3-1 win over the visiting Flint Firebirds on Thursday.

A jam-packed long weekend of OHL action gets underway with an eight game Friday night. Keep an eye out for key additions as they aim to make an instant impact with their respective clubs.