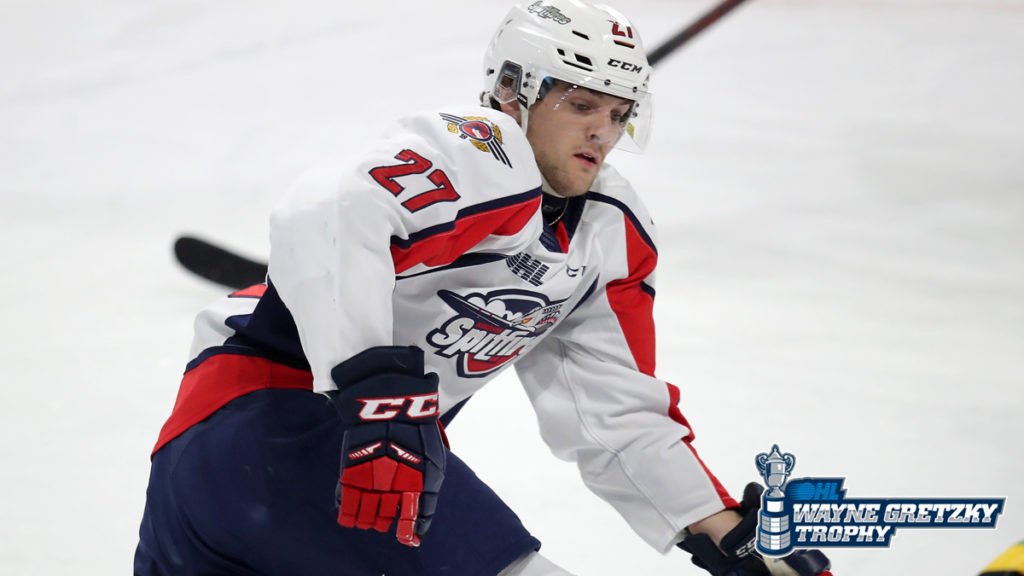 All roads lead back to Windsor for Michael Renwick.

Acquired from the Hamilton Bulldogs in 2020, the Spitfires defenceman has made the most of his opportunity with an organization that has had ties to his family for quite some time.

“It’s been great,” he said, reflecting on his first full season in Windsor. “The team has done really well, you have a limited time in this league, so when you’re a part of a successful team, you want to make the most of it.”

That being said, it has been a rather seamless transition for the Mississauga native in his first season in Windsor, with many of his extended family members holding strong roots nearby.

“I’m always getting countless invites over for dinner from them,” he said, receiving invites from his aunt, cousins, but as well as his grandparents. “It’s awesome, makes me feel like I’m not far from home at all.”

Renwick’s grandfather specifically, Dave Prpich, was a former boss behind the bench for the Spitfires, serving as assistant coach from 1985-1992, coaching the likes of Peter DeBoer, Jamie Allison, Cory Stillman and many others that continued to have successful hockey careers. Prpich returned to the organization in 1997, spending six more seasons in both assistant and interim head coach roles.

Michael Renwick’s patience pays off as he nets the game-tying goal for @SpitsHockey, making it a 2-2 game heading into the third period. #WSRvsKIT pic.twitter.com/oOrCB5te3F

“He would always tell me stories since I was a young kid,” specifically about the tales about Prpich’s 1987-88 team that made runs to the OHL Championship and Memorial Cup final. “I would always try to take some of the lessons that were hidden in those stories.”

Now in a deep playoff run of his own, Renwick has been using his grandfather’s wisdom and storytelling as motivation.

“I think now, especially during the playoffs, hearing those stories and how close they were, makes me want to win it for him.”

As the Spits look to advance to their first OHL Championship Series since last winning in 2010, Renwick has been a perfect fit as a leader both on and off the ice for a Spitfires team that finished atop of the Western Conference regular-season standings. He finished his 19-year-old season with 11 goals, 18 assists and 29 points to go with a plus-28 rating in 67 games on the blue line.

“He’s really come into his own this year,” said teammate Matthew Maggio. “He tries to come in and be the same person every day with a positive mindset. He’s become a big part of this team and we rely on him every night.”

With the Wayne Gretzky Trophy up for grabs, Renwick and the Spitfires look to even the series tonight as they host the Flint Firebirds in Game 2 of the Western Conference Championship Series.

“We’re confident in our group, and we know we can get the job done here tonight.”