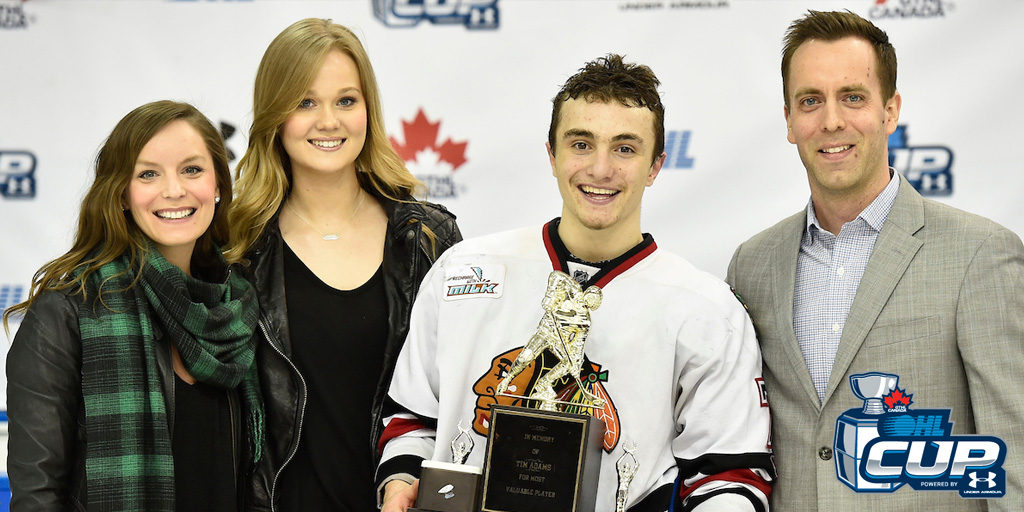 Mike Petizian of the Mississauga Reps is the 2017 OHL Cup Powered by Under Armour MVP, leading the Reps to their first ever OHL Cup title with 13 points over seven contests.

Petizian has been awarded the Tim Adams Memorial Trophy, given annually to the Most Valuable Player of the Minor Midget showcase.

The Mississauga native earned Player of the Game honours in the Reps’ 3-2 Championship Final victory over the Toronto Nationals, recording a goal and an assist to bring his overall total to five goals, eight assists and 13 points.

The 5-foot-7 left-winger recorded points in six of his seven games, including five different multi-point efforts. He also collected an additional three assists in the Reps’ 5-2 Wild Card Play-In game victory over the Halton Hurricanes on Tuesday to gain tournament entry.

When round-robin action began, Petizian picked up where he left off contributing two assists in the Reps’ 3-2 tournament-opening victory over the Toronto Marlboros on Wednesday, then registered three assists in a 3-2 win over the Thunder Bay Kings later that night. Petizian scored his first goal of the week on Thursday in a 2-2 tie against the Ajax-Pickering Raiders.

Petizian’s best performance featured a hat-trick in Mississauga’s 5-1 Quarter-Final victory over the Toronto Jr. Canadiens on Saturday morning. He followed up that effort with two assists in a 3-1 Semi-Final triumph over the top-ranked ALLIANCE Champion London Jr. Knights.

Additionally, he finished second among all players with 30 shots on goal in the tournament and finished tied for the OHL Cup lead in power play points with four.

Petizian’s 13 points are the most by an OHL Cup MVP since Connor McDavid of the Toronto Marlboros recorded 19 in 2012.

Tim Adams was a graduate of the Greater Toronto Hockey League and a long time coach of both the Toronto Marlboros and Toronto Young Nationals. His life-long commitment to minor hockey truly demonstrated his passion for the game. Tim was unfortunately taken from us at an early age after a courageous battle with cancer. Presenters of the award in 2016 were his three children Sarah Adams, Bryan Adams, and Alanna Keene.