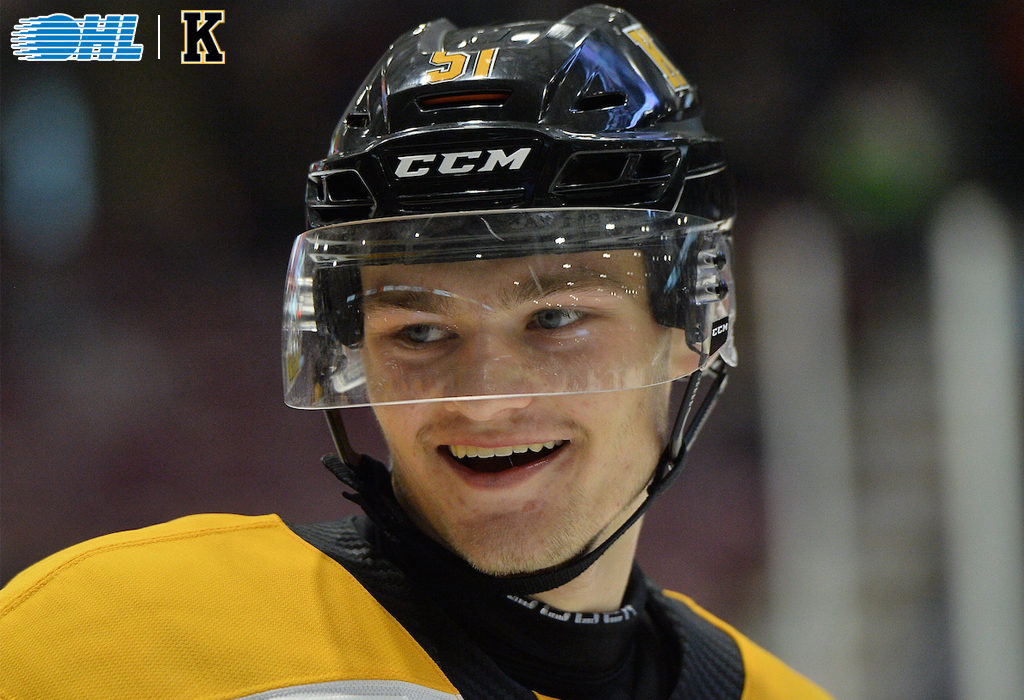 If you’ve watched the Kingston Frontenacs play at all this season, you already know there’s something special about Shane Wright.

The centreman sits second atop the OHL rookie scoring race with 19 goals and 13 assists for 32 points in 33 games through the opening half of his first season in the league. He plays a 200-foot game with remarkable acceleration and a wicked shot.

Behind closed doors he leads practice drills, he puts 100% into every rep of his workouts, and doesn’t cut corners. He’s a leader among the five other rookies on his team and shows them how to do what comes naturally to him: put up big points.

He is just the 6th player to earn exceptional status and play @CHLHockey as a 15-year-old.

But what makes Shane Wright exceptional is just as much about who he is off the ice as what he does on it.#WorldU17 | @shane_wright51 | @KingstonFronts | @DMFlyersAAA pic.twitter.com/TZHjLfAIAf

He boasts the poise and work ethic of a player beyond his years, and his outspokenness lights up the dressing room in a way that makes every player want to be better.

All in all, he’s adjusted to the Ontario Hockey League culture seamlessly, and his production has spoken for himself.

So it’s really no surprise that even as newly-turned 16-year-old rookie, the youngest skater in the OHL, the sum of all these qualities has earned him an “A” on his sweater, becoming the youngest CHL player to ever be named to a club’s leadership team.

No surprise to his teammates, but perhaps a bit of a surprise for the Burlington, Ont. native himself.

“I was surprised by it,” Wright said of the accomplishment.

“I wasn’t sure if I was going to get a letter or not, but wherever I go I bring those leadership qualities with me, so whether I did or didn’t, I knew I was going to be a leader either way.”

Among the leadership qualities that stick out to Wright personally is his initiative to speak up.

“I am really vocal to the guys,” he said. “I think I lead by example as well with my work ethic and the way I handle myself all around.”

That work ethic is something his teammate Jake Murray can speak to without hesitation.

“For a kid with such talent who may feel like he doesn’t have to work as hard as he does, for him to come in and work until he can’t anymore is really impressive,” Murray said.

“Other guys definitely look up to that and definitely admire his work ethic, especially considering the amount of skill that he has.”

That superlative skill earned him exceptional status, an accolade he shares with the likes of John Tavares and Connor McDavid, to which he’s drawn comparisons. He was granted the stature by Hockey Canada following a 66-goal, 150-point season with the GTHL’s Don Mills Flyers last year and an OHL Cup championship that saw an 18-point performance with rinks chock-full of scouts and fans.

He joined a Frontenacs team that finished in the OHL’s bottom spot with only 30 points to their name at the conclusion of the 2018-2019 season, and a team that has yet to appear in an OHL final.

On a team that needed his multi-faceted touch, he immediately left an impression with his teammates and coaching staff.

“Right from day one, you could already see the leadership qualities in him,” remembers Frontenacs head coach, Kurtis Foster.

“But we knew at his age, it was too early to give him anything.”

The Fronts started the season off with Jakob Brahaney owning the captaincy and Jake Murray as the lone assistant, leaving two spots open.

“We had a conversation before Christmas about whether or not we should add two more assistants and who might they be. Shane’s name came up right away along with Nick King’s.”

Having been traded to the Frontenacs earlier in the season from the North Bay Battalion, King was given the A on his sweater alongside Wright in late December.

“We just felt it was time for Shane to be recognized for what he does, and having guys like Nick and Brahaney to show him the way, we thought it was perfect timing,” said Foster.

Bringing a vocal element to the dressing room is something King and Wright share in common. King joins the leadership group as a 20-year-old overager midway through his fifth OHL season with plenty of league experience to bestow.

“I am very talkative in the room,” said King. “Being as old as I am, I can try to guide the younger guys through the years and show them the ropes.”

Captain Brahaney, fellow defencemen and fellow overager, also knows the importance of demonstrating that leadership role to the younger guys on the team.

“I feel that if I’m leading by example then I’m able to keep and hold other guys accountable, and by doing so, it allows me to be a bit more vocal and make sure the guys are focused and ready for games,” said Brahaney of his leadership role.

Foster’s been pleased about what he’s seen out of Brahaney.

Shane shines in overtime! 🚨@shane_wright51‘s second of the night is an absolute laser that gives the @KingstonFronts their first ‘W’ of the season and #51 his first career #OHL game winner. pic.twitter.com/9ZnAChmsKc

“[Jakob]’s what we want a Kingston Frontenac to be,” he said. “He takes care of himself physically, he brings it every single day, whether it’s in practice or in the gym, and that’s what you want your culture to be. To have a kid like Shane learn from guys like him, it bleeds the traits and habits and the values that we want in a Kingston Frontenac.”

And according to Brahaney, Wright’s fitting in with that Frontenacs culture effectively.

“Coming into the year, there were obviously a lot of expectations on him so I wasn’t sure how he was going to handle them,” Brahaney said.

“But every day I become more impressed with him. He’s a complete pro and does everything right. He’s not afraid to hold anyone accountable which at his age is very impressive.”

The two of them room together while on the road, providing more opportunity for Wright to pick his captain’s brain on routines and for the two of them to bounce ideas off of each other in between games.

What’s impressed Brahaney most about Wright’s confidence as the youngest rookie on the team is, again, his work ethic.

“He comes to work and he just wants to be a player every day and he makes the guys around him better because of that.”

And if there’s anything Brahaney hopes to help him out with most throughout what will be their only season as teammates, it’s teaching him to let go of some of the pressure that inevitably comes with joining the league, especially as its youngest player.

“Right from the get go I realized that was something he struggles with a little bit,” said Brahaney. “I try to help him and remind him it’s a team game. We all could’ve done something else to try to change the outcome of the game so it’s not on him by any means.”

PS…We may have some more news coming later today…😏 pic.twitter.com/G0ZLJSvSdw

Through their first 37 games, the Frontenacs currently hold a 10-23-2-2 tally. They hover at fifth place in the East Division and second last among all OHL clubs. The team acknowledges there’s work to be done and obvious room for improvement, but remain confident they’re bound for a successful second half.

“Our starts have sometimes not been our strongest point, so obviously as we head on into the second half, we’re going to continue to work on that,” said Brahaney.

For Wright, success is going to come down to team chemistry.

“We need to keep playing our game, be positive, make sure we’re a tight group, and make sure no one’s left out of the room,” he explained. “We need to make sure everyone’s included. If we nail down on that, we’ll be fine.”

And boosting that team chemistry goes hand in hand with Wright’s vitality to remain a vocal member of the Frontenacs roster.

“I’m encouraging on the bench. If someone’s down after a bad shift or play, I’m there to just talk them out of it and tell them to relax and forget about it for the next shift,” he said.

That vocal aspect of Wright’s game is a domain that continues to see him flourish. It’s another trait that continuously impresses Captain Brahaney and Coach Foster, and a sizeable part of the reason he’s sporting that A on his jersey.

“The way he treats his teammates, his peers, his coaches, the staff at the rink, refs, and anyone really is impressive,” Brahaney said. “The way he comes every single day to the rink and be a good person, be a good teammate, and encourage the guys.”

“For a kid who’s 15 and younger than everyone in the league, it’s pretty amazing to see that he’s willing to step up and be vocal. He pushes his teammates to do the right things, and he does that vocally. It’s a nice message when he’s relaying the same message as the coaching staff,” said Coach Foster.

Being the youngest guy in the league is an honour, the exceptional player accepts. But even so, only days away from his 16th birthday on Jan. 5, age isn’t something Wright chooses to fixate on with regards to his role, his success, or in the grand scheme of his blossoming career.

“I don’t think age has anything to do with leadership qualities,” Wright said. “I don’t think it matters how old you are or how young you are. It all comes down to the kind of person you are.”