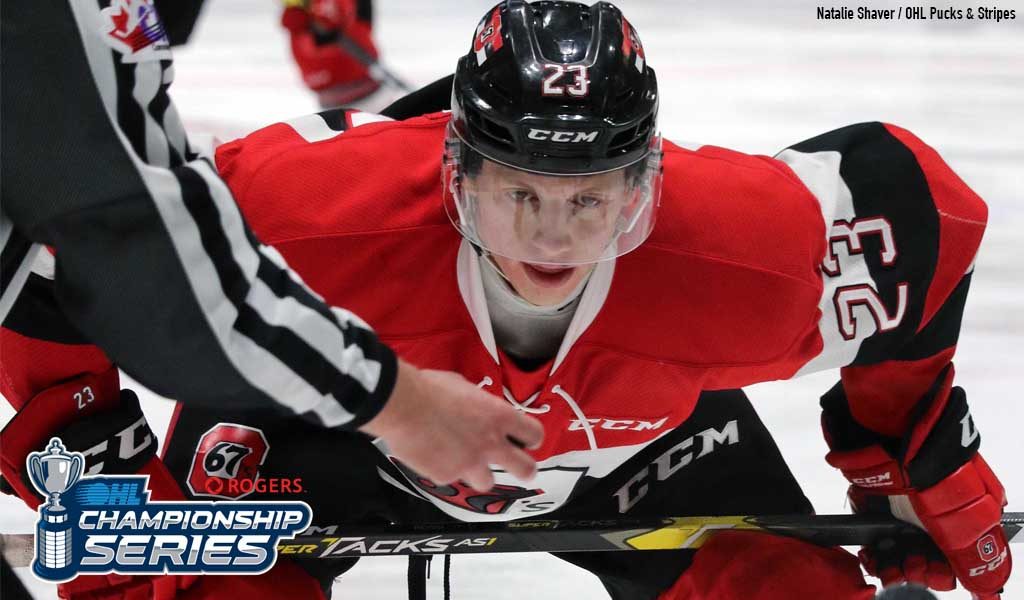 He’s one of the few players from Austria to ever set foot on OHL ice and he’s had quite a time doing it.

Taken with the 18th pick of the 2018 CHL Import Draft, Marco Rossi burst onto the scene with a 16-point month of October and hasn’t looked back, making gradual improvements in several areas of his game while earning the favour of well-travelled 67’s head coach Andre Tourigny.

Rossi finished the season with 65 points (29-36–65) over 53 contests but the 17-year-old rookie is more than just an offensive dynamo. He’s been counted upon to stop the opposition’s top players, often seeing duty in the late stages of close games.

“Nico Hischier, he was so committed defensively, it was unreal and Marco is in the same ballpark,” said Tourigny, who coached first overall NHL Draft pick Hischier in Halifax during the 2016-17 season. “(Rossi) wants to produce, but he knows he has to play well defensively.

“When you’re 10 or 12 years old, there’s a lot of hype around offence, offence offence and you grow up with that, but at some point in life, you have to realize to be a winning hockey player, you have to commit yourself. For some players, it comes later than others.”

The son of long-time Swiss Elite League puck-moving defender Michael Rossi, Marco grew up around the rink, inheriting a love for the game from his father. They spent several hours together going to-and-from Rossi’s home in Feldkirch, Austria to games and practices an hour-and-a-half west in Zurich, Switzerland.

“The first experience was amazing,” he said of his time in Ottawa. “Last summer I made the decision to come over and I think it’s my best decision so far. I wanted to play Canadian hockey because it’s different than European hockey because everything happens in a smaller area so that’s what I wanted to learn.”

Rossi starred on a line alongside 109-point scorer Tye Felhaber and veteran setup-man Austen Keating early in the season, a unit that has since added the grit of Washington Capitals prospect Kody Clark to the wing.

“These guys they make it easy for me,” Rossi said of his success.”Felly is a goal-scorer, he scored almost 60 this season. I try to find him and give him the puck and Kody is a great skater and an extremely hard worker who finishes his checks and wins the 50-50 battles.”

Rossi’s first go of things in the OHL hasn’t been without a setback or two. He suffered an elbow injury representing Austria at the U18 Division 1A Worlds in November that sidelined him into the new year but he responded with back-to-back three point efforts in his second and third games back in the lineup. He also missed Game 4 of the Eastern Conference Championship Series with an upper body injury but was good to go for the league final where he’s helped the 67’s take a 2-1 series lead on the Guelph Storm.

“Andre, Norm (Milley) and Mario (Duhamel), every day they work with me on what I have to improve and I think they’ve been my best coaches so far,” he said of the staff in Ottawa. “I’ve improved so much this year and I’m so thankful.”

Unfortunately for NHL clubs, Rossi won’t be up for grabs until the 2020 NHL Draft due to his late September 23rd birthday.

The man teammates affectionally refer to as ‘Ross the Boss’ isn’t too preoccupied with that whole process just yet.

“I’ve got one more year and I’m not really thinking about it too much yet,” he said. “Right now we’re trying to win a championship and that’s the only thing on my mind.”