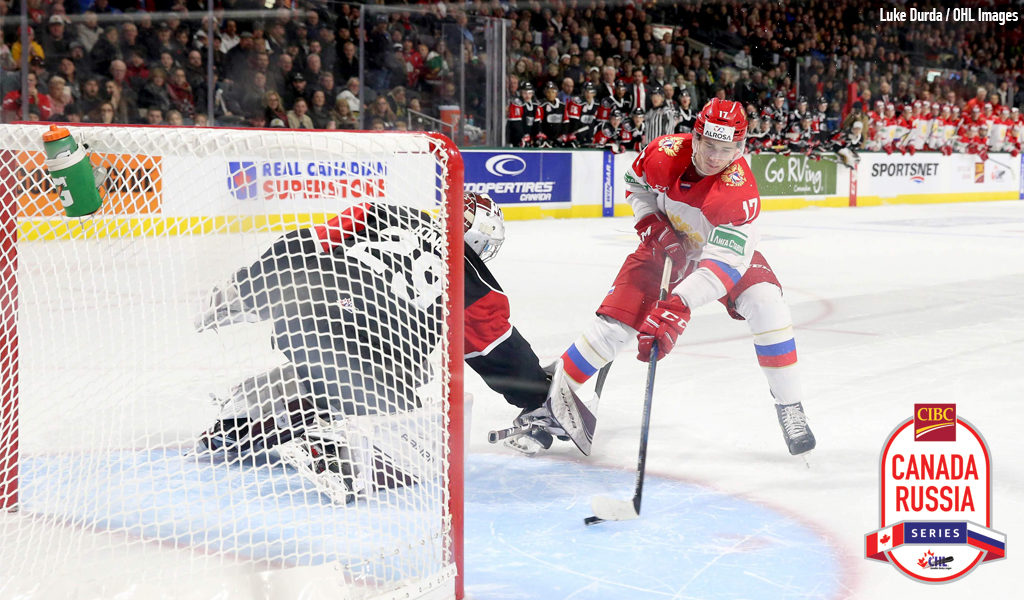 London, Ont. – Two separate comebacks and a goal-filled shootout led Russia to a 3-2 decision over Team OHL in Game 4 of the 2019 CIBC Canada Russia Series.

The 100th game in the history of the annual Canada/Russia clash came back to where it all started in London, Ont., the host of the first-ever matchup back in 2003.

Capitalizing midway through the first frame, Team OHL grabbed an early 1-0 lead after Knights forward Connor McMichael cashed in on a flurry of chances in front of Russian netminder Amir Miftakhov.

Team OHL carried the lead until the 2:34 mark of the third period when Russian forward Rodion Amirov buried a big rebound on the man advantage that was initially turned aside by Team OHL netminder Hunter Jones of the Peterborough Petes. Team OHL’s lead was quickly regained however when Oshawa Generals forward Serron Noel, who would later be recognized as Team OHL’s Player of the Game, skated in on the wing and wristed a bullet by Miftakhov.

Less than five minutes later, Russia would again even the score courtesy of a terrific individual effort from centre Lev Komissarov who broke into the Team OHL zone while shorthanded and put a puck by Jones.

Extra time would be required to decide a winner, with each side getting a handful of chances before time expired and the shootout followed. The five-goal set saw Russia capitalize on its three initial chances, enough to draw the victory after Team OHL failed to light the lamp in three of its four attempts.

“In the second half, we gave up a few chances. They got that power play goal and that got them going, and then we made a few mistakes and it costs us,” Team OHL head coach Dale Hunter said following the 3-2 final. “It’s tough. Most of the kids have played a few games on the weekend, but that’s what this test is all about – who can actually fight through it because it’s a tough schedule once you get (to the world juniors).”

In 17 years of competition against the Russian National Junior Team, the OHL has played to a record of 26-6-2, with Monday’s outcome marking just the third time in series history that Team OHL and Russia have required a shootout. The game was played before a crowd of 7,873 at Budweiser Gardens.

The 2019 CIBC Canada Russia Series now shifts to Western Canada with the CHL and Russia tied at six points apiece. Game 5 is set for Wednesday in Saskatoon before the series wraps up in Prince Albert on Thursday.