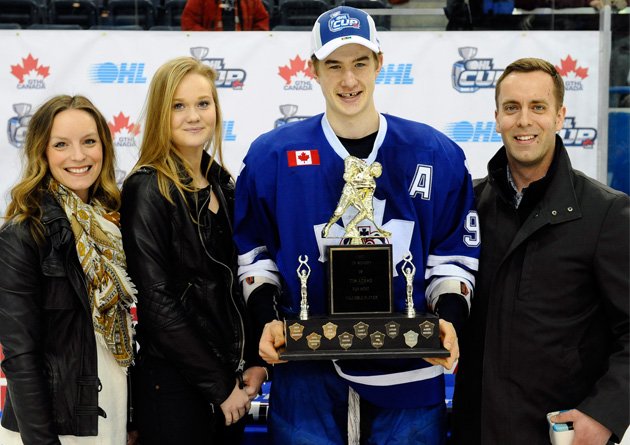 Toronto, ON – After Michael McLeod elevated his game to lead the Toronto Marlboros to the 2014 OHL Cup title, younger brother Ryan McLeod has followed in his footsteps.

The younger McLeod was named the MVP of the 2015 OHL Cup, leading the Toronto Marlboros to their second straight title and fifth in the past 11 years with a 3-2 win over the Don Mills Flyers at the Mattamy Athletic Centre.

“I had the opportunity to play in the Championship game as a call-up with my brother last year,” said Ryan McLeod following Monday’s Championship win. “He’s really helped me through my career and has always told me just to play the game my way, the way I know how and that things will all come together.”

McLeod had a goal in Monday’s 3-2 overtime win over a Flyers team that the Marlies defeated in a grueling eight game GTHL Championship series that ended just over a week ago. McLeod scored 9:22 into the first period off a rush down the wing to give the Marlies their first goal of the night.

The Mississauga, ON, native caps off an incredible season where he won Canada Winter Games gold with Team Ontario, and GTHL Player of the Year honours.  He had points in six of his seven OHL Cup contests, proving to be a valuable part of the Marlies late tournament success. He finishes the 2015 OHL Cup with three goals, four assists and seven points in seven contests.

Down 2-1 in the third period of Friday’s round-robin game against the Ottawa Jr. 67’s, McLeod split the ‘D’ to score a beautiful goal, sparking a Toronto offence that went on to score four more for a 6-2 victory.

McLeod’s heroics continued on Saturday morning when he beat a Quinte Red Devils defender 36 seconds into overtime before slipping a low shot underneath the goaltender to give the Marlies a 2-1 win in Quarter-Final action.

McLeod’s playmaking abilities were on full display on Saturday night when he made two cross-ice passes to linemate Jaden Peca, setting him up for two goals in a 4-3 Semi-Final victory over the London Jr. Knights to earn a spot in the OHL Cup Final.

“I can’t think of a better way to end my minor hockey career,” McLeod said with a smile. “This is the best feeling.”