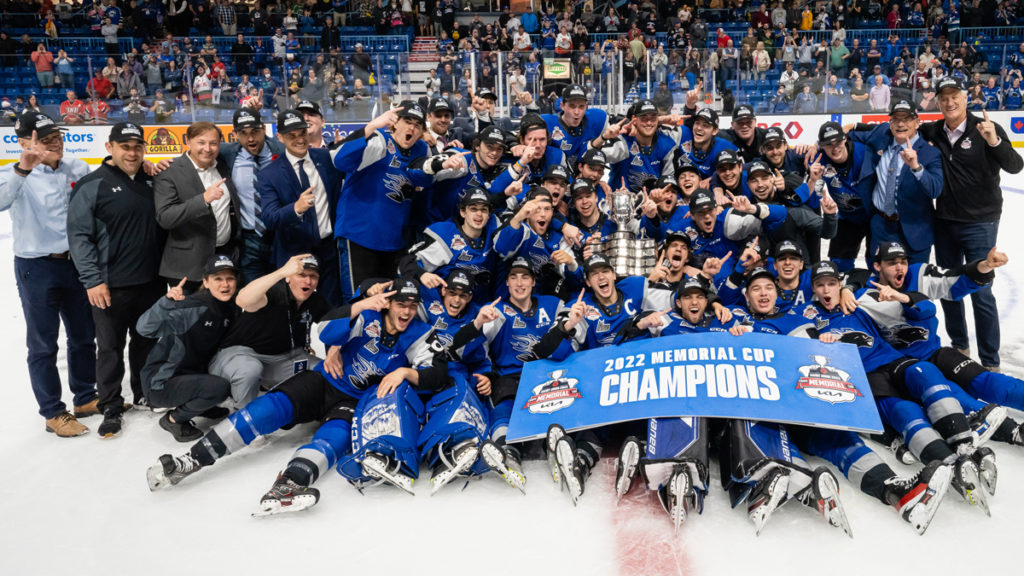 Saint John, NB – The Saint John Sea Dogs are champions of the 2022 Memorial Cup presented by Kia, putting an end to an incredible run by the OHL champion Hamilton Bulldogs on Wednesday night before a sold out home crowd of 5,849.

Cam MacDonald had a goal and two assists while Memorial Cup MVP William Dufour had a goal and a helper as the Sea Dogs defeated the Bulldogs 6-3, hoisting the Memorial Cup for the second time in franchise history. Saint John scored twice in each period, climbing out to a 2-0 lead before staying a step ahead of Hamilton throughout the game.

“They’re a champion of champions.”@BulldogsOHL head coach Jay McKee with post-game remarks following a 6-3 loss in the Championship Final of the 2022 #MemorialCup presented by @KiaCanada 🎥 pic.twitter.com/h9DP9WtDAM

“Steve Staios said it best when he talked to the guys,” McKee continued. “We won a championship, we lost a tournament. It’s tough, very emotional in the room. In all my years of playing hockey and being a coach, I’ve never been part of a tighter group.”

Mason McTavish scored a pair of goals for Hamilton to round-out the tournament with six while Jan Mysak also found the back of the net for the Bulldogs in their 92nd and final contest of the 2021-22 campaign. Nathan Staios and Gavin White both picked up a pair of assists for Hamilton as the Bulldogs fell one win short of capturing the Canadian Hockey League’s ultimate prize.

The OHL champion Bulldogs played to an overall record of 2-3 at the 2022 Memorial Cup as McTavish and Logan Morrison, who picked up an assist in Wednesday’s loss, finished tied for the tournament scoring lead with eight points apiece. After picking up points in all 19 of his OHL Playoff outings, Morrison continued his point streak into the Memorial Cup, registering points in each of Hamilton’s five contests.

The Sea Dogs give the QMJHL its third straight Memorial Cup title after the Acadie-Bathurst Titan won in 2018 and the Rouyn-Noranda Huskies prevailed in 2019. It marks the first time a host team has captured the Memorial Cup since the Windsor Spitfires last did so on home ice in 2017.

For more on the 2022 Memorial Cup presented by Kia, visit chlmemorialcup.ca.