Samorukov puts on a show as Storm shut down Spirit 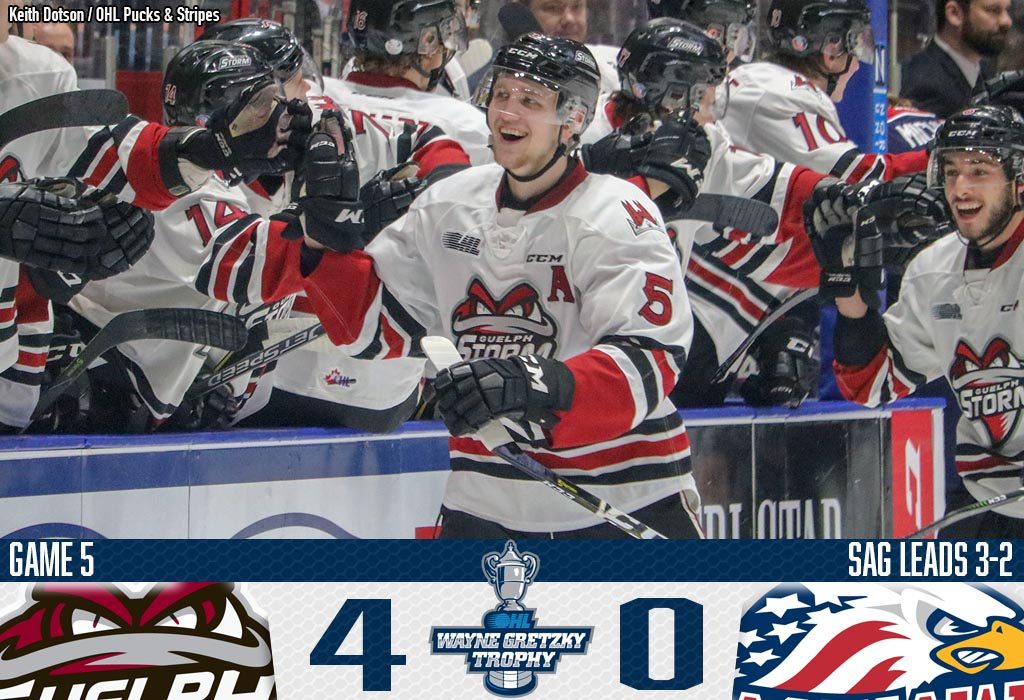 Saginaw, MI – Just when it appears the Guelph Storm are about to meet their playoff demise, they come back with an inspired effort.

Such was the case once again on Friday night in Saginaw as Edmonton Oilers prospect Dmitri Samorukov (6, 7, 8) pulled out all the stops, recording his first career OHL hat-trick in a 4-0 road win to keep the Storm alive.

No team has ever overcome two different 2-0 series deficits to win an OHL Championship, but the Storm have their sights set on becoming the first and they took another step in the right direction in Game 5.

“Sammy’s had a tremendous year,” said Storm head coach George Burnett of Samorukov’s first star performance. “He’s amongst the best in the league.

“He seems to be tireless and we need to keep him strong. One of the keys for us tonight was our shift length which was much better in the early going and I think it allowed us to have some better energy as the game went along.”

A scoreless first saw the two clubs each register 12 shots on goal before the Storm took control of things, outshooting Saginaw 31-8 the rest of the way.

Samorukov opened the scoring 5:33 into the second period as OHL Playoff scoring leader Nick Suzuki collected one of his four assists on the night. The Russian defender carved out a lane to the net, beating Tristan Lennox on the backhand.

Storm captain Isaac Ratcliffe (9) got help from Samorukov to extend the Storm lead to two with 4:43 left on the second period clock before the Oilers prospect netted his second of the night just over two minutes later to put Guelph in full control up 3-0 after 40 minutes.

Samorukov completed his hat-trick 1:44 into the third while goaltender Anthony Popovich locked down his second shutout of the postseason with a 20-save performance.

“I don’t know what it is but when we need to our team really steps up to the plate,” said Popovich, a third-year veteran in the Guelph crease. “We’ve played well in elimination games. We’ve got two more to go we just have to keep it going here on Sunday.”

#OHLPlayoffs #SAGvsGUE: Dmitri Samorukov becomes the first @Storm_City defenceman to score a hat trick in a playoff game in the Internet Era. Tyler Bertuzzi had the team’s last overall on March 29, 2015.

After a decisive 4-1 road win to take a 3-1 series lead in Guelph on Wednesday, Chris Lazary’s Saginaw Spirit weren’t able to follow through before a home crowd of 5,627 in Game 5. Rookie netminder Tristan Lennox made 39 saves as the Spirit were outshot 43-20.

“Not our night,” said the Spirit head coach. “We’ve had chances in these playoffs here to close out games and for whatever reason when we play our first elimination game we struggle and then we find a way to get back at it. We have a resilient group, tons of character in the room, zero panic. We know we have to be better and we’re going to find a way to do that in Game 6.”

The Storm controlled the faceoff circle along with the possession game, limiting Saginaw’s big names to return to Guelph down 3-2 in the series.

“Our elite players have to be elite,” Lazary added. “This is why we’ve acquired Ryan McLeod, Owen Tippett, Reagan O’Grady and have guys like Damien Giroux, (Blade) Jenkins and (Cole) Coskey. Our older guys, our elite guys need to lead the way and they will. They know that. They know they weren’t good tonight, nobody needs to tell them. One thing about our group, when they’re disappointed in a game they’ve played they’re always lights out in the next one.”

Fortunately for the Spirit, Sunday is right around the corner as the two clubs meet once again when the puck drops at 2:00pm for Game 6 at the Sleeman Centre in Guelph.