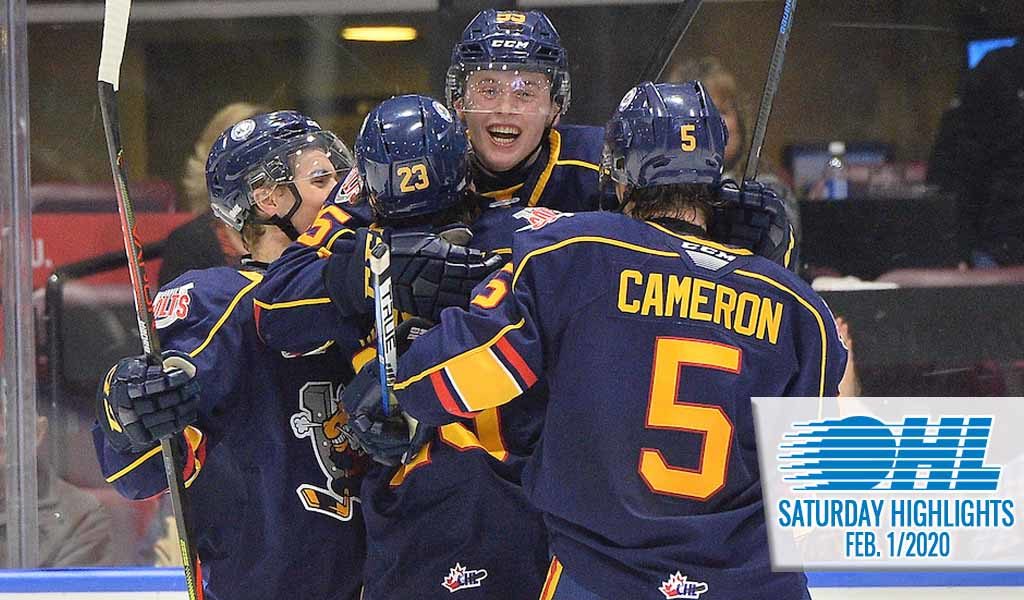 BARRIE 5, KINGSTON 3
Martin Chromiak (7) put the Kingston Frontenacs ahead 3-2 just 11 seconds into the third period but the host Barrie Colts would pull away with three unanswered in a 5-3 victory. Brandt Clarke (2) tied the score at 6:57 before Evan Vierling (6) scored the game winner just 20 seconds later. Aidan Brown (12) would add insurance, securing Barrie’s fifth win in the past six games. Luke Bignell (13) and Ethan Cardwell (19) also lit the lamp for the Colts while Vancouver Canucks prospect Arturs Silovs made 37 saves. Shane Wright (26, 27) was a bright spot for Kingston, scoring twice while adding an assist as he went 19-for-31 in the faceoff circle. Chromiak finished with a goal and two helpers while overage defenceman Nick King had a pair of assists. Barrie moves to within two points of second place Mississauga in the Central Division while Kingston falls to 14-27-2-2.
GAME CENTRE

FLINT 5, KITCHENER 3
The Flint Firebirds skated to their seventh straight win, handing the Kitchener Rangers their first regulation loss in 16 games as Jack Wismer (15, 16) scored twice in a 5-3 triumph. St. Louis Blues prospect Tyler Tucker (11) started the Flint scoring while Jack Phibbs (12) and Evgeniy Oksentyuk (23) also found the scoresheet. Arizona Coyotes prospect Axel Bergkvist (6, 7) scored twice for the Rangers while Mike Petizian (17) extended his point streak to 11 games with a marker of his own. Anthony Popovich stopped 29 of 31 for the win as Flint pulls into a fourth place tie with Windsor in the Western Conference, improving to 29-17-1-1. The Rangers suffer their first regulation loss since Dec. 20th, falling to 29-12-5-2.
GAME CENTRE

OWEN SOUND 6, WINDSOR 2
Six different players had goals and rookie Nick Chenard made 31 saves as the Owen Sound Attack defeated visiting Windsor 6-2. Logan LeSage (1) opened things up with his first OHL goal before Barret Kirwin (22) and Josh Samanski (4) gave the Bears a 3-1 lead after one. Sergey Popov (4), Deni Goure (8) and Matthew Struthers (19) also tallied while Adam McMaster, Kaleb Pearson and Brady Lyle each recorded two assists. Curtis Douglas (21) and Daniel D’Amico (19) scored Windsor goals as the Spits dropped their third in a row, falling into a fourth place tie with the Flint Firebirds in the Western Conference. The Attack outshot the Spitfires 44-33 and went 2-for-8 on the power play. Owen Sound improves to 23-19-3-3, one point back of sixth place Guelph in the Western Conference.
GAME CENTRE

HAMILTON 9, NIAGARA 4
Jan Mysak’s (5, 6, 7) first career hat-trick came in just his seventh game as the 2020 NHL Draft prospect scored three first period goals to kickstart a 9-4 Hamilton Bulldogs win. Mysak wrapped up the afternoon with three goals and two assists while teammate Arthur Kaliyev (33, 34) became the Bulldogs’ all-time leading goal scorer with number 115 and 116 on his career as part of a four-point effort. Isaac Nurse (10), Nathan Staios (4), Mark Duarte (1) and Ryan Humphrey (2) also scored for the Bulldogs as they outran the visiting Niagara IceDogs. Hamilton led 7-2 after two periods as Niagara came up with a couple late ones from defenceman Elijah Roberts (1, 2) to no avail. Isaac Enright (1) and Jake Uberti (12) joined Roberts on the scoresheet. The Bulldogs managed to score nine times on 27 shots as they were outshot 36-27. Zach Roy made 32 saves for the win as the Bulldogs improved to 20-22-4-1 for seventh in the Eastern Conference. The IceDogs have now lost five straight and surrendered 17 goals in their last two games, falling to 17-26-4-1, seven points up on Kingston for the eighth and final playoff spot in the Eastern Conference.
GAME CENTRE

LONDON 5, SARNIA 2
The London Knights skated to their eighth straight win as San Jose Sharks prospect Ryan Merkley reached the 250-career point plateau with a goal and two assists in a 5-2 triumph over the Sarnia Sting. Merkley scored the deciding goal 4:07 into the second period while fellow rearguard Alec Regula (16, 17) also scored twice. Billy Moskal (10) and Liam Foudy (18) also provided London goals as the Knights outshot the Sting 47-23 and went 2-for-4 on the power play. Sean Josling (29) and Ryan McGregor (20) scored Sting goals as they dropped their eighth straight decision. Knights rookie Mathias Onuska made 21 saves to pick up the win in his first career start opposite Sarnia’s Ethan Langevin who turned aside 42. London climbs ahead of the Kitchener Rangers for first place in the Midwest Division with a 32-13-1-1 record. Sarnia has fallen to 16-28-4-1.
GAME CENTRE

PETERBOROUGH 4, OSHAWA 1
The Peterborough Petes bounced back from a Friday night loss in Oshawa, exacting vengeance in pink as Toronto Maple Leafs prospect Nick Robertson (37, 38) scored twice in a 4-1 victory over the visiting Generals. Robertson scored in an 11th straight game, the longest such streak in the League this season while Max Grondin (11) and Mason McTavish (27) joined him in the goal-scoring department. The win puts an end to Peterborough’s five-game slide as Semyon Der-Arguchintsev had a pair of assists and Hunter Jones stopped 21 of 22. Ty Tullio was the lone goal scorer for Oshawa as the Generals were outshot 29-22. Peterborough moves seven points ahead of Oshawa with a 29-18-2-1 record for second in the East Division. The Generals fall to 24-17-4-2.
GAME CENTRE

SAGINAW 6, ERIE 3
Minnesota Wild prospect Damien Giroux (30, 31) scored a pair of third period goals to secure a 6-3 Saginaw Spirit win over visiting Erie. The Spirit led 3-0 after one before Erie put in a strong second, pulling to within a goal. Saginaw pulled away in the final frame, climbing five points ahead of the Windsor Spitfires for first place in the West Division. Cole Coskey (27) had a shorthanded goal and two assists while Cole Perfetti (29), Jake Goldowski (13) and Ryan Suzuki (12) also scored Spirit goals. Mathew MacDougall (3), Emmett Sproule (11) and Daniel D’Amato (15) provided Erie goals as the Otters lost their third straight, being outshot 38-28. Tristan Lennox stopped 25 for the Spirit while rookie Aidan Campbell took the loss, making 32 saves in the process. The Spirit improve to 31-14-2-2 and into a first place tie with the London Knights atop the Western Conference. The 20-17-3-6 Otters hold a one point lead on the Soo Greyhounds for the eighth and final playoff spot in the Western Conference.
GAME CENTRE