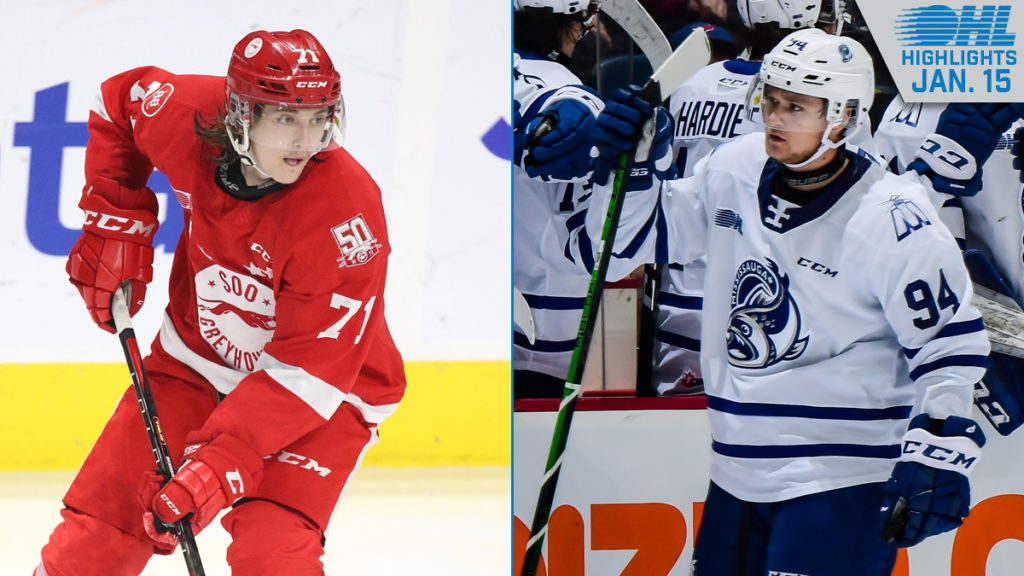 MISSISSAUGA 3, BARRIE 1
– The Mississauga Steelheads extended their point streak to eight games, outshooting the Colts 37-17 in a 3-1 win.
– Big blueliner Kasper Larsen scored his first career OHL goal.
– James Hardie’s 26th of the season extends his goal-scoring streak to six games and pulls him into a tie for the most in the League this season.
– Ethan Cardwell ended Joe Ranger’s shutout bid with just 1:50 remaining in the third period.
– Ranger stopped 16 of 17 opposite Barrie’s Mack Guzda who made 34 saves in the loss.
– Mississauga leads the OHL with 47 points and a 22-7-1-2 record.
– Barrie falls to 15-8-3-0 for a tie for fifth in the Eastern Conference. They’ve played a League-low 26 games.
GAME CENTRE & HIGHLIGHTS

James Hardie scores his 26th goal of the season for the @OHLSteelheads! Hardie is now tied in the lead for most goals scored this season🎥 pic.twitter.com/4VZ2PG3hKb

SAULT STE. MARIE 5, OWEN SOUND 2
– Tanner Dickinson and Ryan O’Rourke each had a goal and two helpers as the Greyhounds moved back to the top of the Western Conference.
– Calgary Flames prospect Rory Kerins scored his 20th goal of the season.
– Keegan McMullen scored in his Soo Greyhounds debut while newcomer Jack Thompson had two assists.
– Nicholas Porco scored his first goal in an Attack uniform.
– Sault Ste. Marie outshot Owen Sound 38-15 as Nick Chenard made 33 saves in the loss.
– The Greyhounds’ top-ranked power play went 3-for-7 as they improved to 19-12-2-0.
– Owen Sound falls to 13-12-1-2, seven points back of fifth place Windsor in the Western Conference.
GAME CENTRE & HIGHLIGHTS

OTTAWA 5, SUDBURY 4 – SO
– Cameron Tolnai scored the shootout winner and Max Donoso picked up his first career OHL win in relief as the Ottawa 67’s claimed their third straight victory.
– Trailing 4-2, Will Gerrior’s first OHL marker preceded a tying goal from Nashville Predators prospect Jack Matier.
– Luca Pinelli earned first star honours for Ottawa with a goal and two assists.
– David Goyette built off a four-goal effort on Friday, joining Kocha Delic in recording a goal and an assist for the Wolves.
– Mitchell Weeks made his third start of the weekend, making 34 saves in the shootout loss.
– Ottawa improves to 15-17-1-1, one point back of fifth place Oshawa and Barrie in the Eastern Conference.
– Sudbury claims five of a possible six points in their weekend three-in-three road trip, holding down eighth in the Eastern Conference with a 10-18-3-1 record.
GAME CENTRE & HIGHLIGHTS

OSHAWA 4, PETERBOROUGH 1
– Colorado Avalanche prospect Oskar Olausson’s first as a General was the game winner with 6:56 remaining in the third period.
– Olausson joined Ty Tullio and Ryan Stepien with a goal and an assist while Stuart Rolofs recorded a pair of helpers.
– Hometown product Chase Stillman scored his first goal as a Peterborough Pete in the loss.
– Patrick Leaver stopped 36 of 37 to earn second star honours while Peterborough’s Tye Austin made 20 saves in the loss.
– The Generals climb to 15-11-1-2 for a fifth place tie in the Eastern Conference.
– Peterborough has lost four in a row, falling outside of the playoff picture with a 10-19-2-0 record.
– Oshawa has won four of five matchups against Peterborough so far this season.
GAME CENTRE & HIGHLIGHTS

The @Avalanche prospect with a BEAM for his first as a General!

It also gives us the lead 😇#OSHvsPBOpic.twitter.com/l7JhEOt7NL

FLINT 1, SAGINAW 0
– 2022 NHL Draft prospect Simon Slavicek’s first OHL goal was the difference-maker as the Firebirds took a 1-0 win in Saginaw.
– Luke Cavallin stopped 25 of 25 for his second shutout of the season, backstopping the Firebirds to a third straight win over the rival Spirit.
– New York Islanders prospect Tristan Lennox stopped 26 of 27 for Saginaw in the loss.
– Flint improves to 17-12-0-2, tied for third in the Western Conference. Their 10th road win puts them in company with Mississauga and London as just the third team with double-digit win totals on the road.
– Saginaw drops a third straight contest, falling to 13-16-1-0 in a tie for eighth in the Western Conference.
– Win marks Flint’s first 1-0 victory in club history.
GAME CENTRE & HIGHLIGHTS

A perfect 25 of 25 for @FlintFirebirds‘ Luke Cavallin (@Cavallin37) in Saginaw, giving the overage netminder his second clean sheet of the season 🎥 pic.twitter.com/yxWarnLXE1