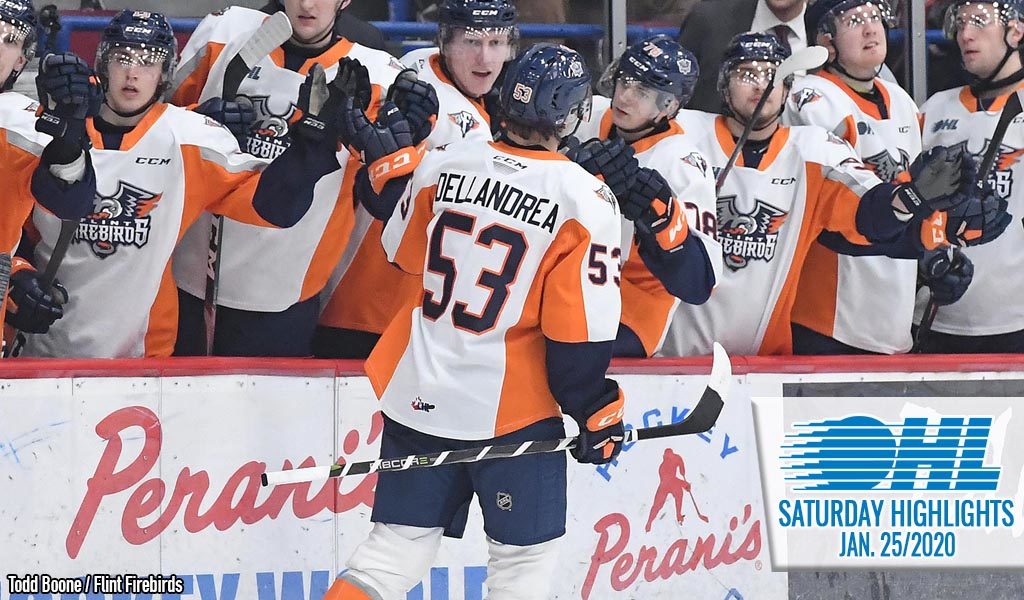 FLINT 4, GUELPH 1
Ty Dellandrea (25, 26) recorded his fourth consecutive two-goal contest as the Flint Firebirds won a fourth straight, defeating the visiting Guelph Storm 4-1. Evgeniy Oksentyuk (22) and Connor Roberts (13) also scored for Flint while Riley McCourt picked up an assist to become the Firebirds’ career points leader among defencemen with 91. Guelph forward Ben McFarlane (2) ended Luke Cavallin’s shutout bid 7:30 into the third period, scoring shorthanded. Flint outshot Guelph 37-27, handing the Storm their ninth straight loss as their tailspin continues. Cavallin made 26 saves opposite Guelph rookie Owen Bennett who turned aside 33.  The Firebirds hold down fifth place in the Western Conference with a 26-17-1-1 record while Guelph has dropped down to seventh at 22-17-1-4.
GAME CENTRE

OSHAWA 7, KINGSTON 4
The Oshawa Generals turned back the clock Saturday afternoon on Sportsnet, celebrating the 30th anniversary of the franchise’s 1990 Memorial Cup Championship. Familiar names like Eric Lindros, Fred Brathwaite and double-overtime hero Bill Armstrong were on hand before the Generals skated to a 7-4 win over the visiting Kingston Frontenacs. The big line of Philip Tomasino, Ty Tullio and Brett Neumann connected, with Tomasino (31) recording a goal and three assists, Tullio (20, 21) scoring twice while adding two assists and Neumann picking up a pair of helpers. Montreal Canadiens prospect Allan McShane finished with three assists on the afternoon as the Generals led 3-1 after one and stayed up on the Frontenacs the rest of the way. Liam Whittaker (1), William Ennis (4) and Brett Harrison (15) also had Oshawa goals while Finnish winger Oliver Suni (9) scored in his return from injury. Kingston rookie Shane Wright (24, 25) had a pair of goals on the afternoon while Dawson Baker (15) and Martin Chromiak (6) also tallied. Oshawa’s Jordan Kooy made 32 saves for the win as the Generals improved to 23-16-3-2 for third in the East Division. Kingston falls to 13-26-2-2. Oshawa has taken four of five in the season series thus far.
GAME CENTRE

BARRIE 8, HAMILTON 7 – OT
Aidan Brown (10) ended a wild one on a breakaway 1:04 into overtime, giving the Barrie Colts an 8-7 win over visiting Hamilton on Bryan Little Night. Little’s #18 was raised to the rafters, inspiring the Colts early as they scored six times in the opening period. Newly acquired forward Ethan Cardwell (14, 15, 16, 17) struck for his first career OHL hat-trick, scoring four times in the opening 20 minutes while Nicholas Porco (8) and Nathan Allensen (7) joined him on the scoresheet. The Bulldogs woke up in the second as Jan Mysak (2), Navrin Mutter (5), Ryan Winterton (8) and George Diaco (3) scored. Barrie’s Josh Nelson (6) had his club’s lone second period marker as the Colts led 7-4 to start the third. Goals from Mysak (3), Winterton (9) and Logan Morrison (19) drew the Bulldogs even at 7-7 before Brown came up with the OT winner on a nice pass from Victor Hadfield. Hamilton outshot Barrie 45-32 as Jet Greaves earned the win in goal for the Colts. Zachary Roy was relieved by Marco Costantini late in the first period. Barrie’s win came before a crowd of 4,018 as the Colts improve to 18-21-2-2, one point back of sixth place Hamilton in the Eastern Conference. The Bulldogs earned a point but suffered their fifth straight loss.
GAME CENTRE

OWEN SOUND 5, ERIE 3
The Owen Sound Attack led 2-0, fell behind 3-2, and finished strong in the third as Adam McMaster (15) scored the game winner in a 5-3 road win over the Erie Otters. The Bears avenged a 5-3 loss to the Otters on Friday as Sergey Popov (12, 13) potted a pair while Barret Kirwin (21) and Kaleb Pearson (17) also scored. Mack Guzda stopped 23 of 26 for the win as Erie’s Chad Yetman (27, 28) scored twice while Maxim Golod (18) also found the back of the net. The win puts the Attack into sixth place in the Western Conference, one point up on the Guelph Storm. The Otters hold the eighth and final playoff position in the West, falling to 20-17-2-6.
GAME CENTRE

SUDBURY 5, SOO 2
Quinton Byfield (27, 28, 29) opened things up with a natural hat-trick, pacing the Sudbury Wolves past visiting Sault Ste. Marie 5-2. David Levin collected assists on all three of Byfield’s opening goals as the Wolves led 3-0 after 40 minutes. Matej Pekar (20) and Brad Chenier (21) tacked on additional goals for the Wolves while Marc Boudreau (4) and Tye Kartye (17) scored Soo markers with Billy Constantinou and Zack Trott assisting on both. Sudbury took the play to Sault Ste. Marie, outshooting the Greyhounds 43-26. Mitchell Weeks made 24 saves for the win while Sault Ste. Marie’s Nick Malik stopped 38. The Wolves lead the Central Division with a record of 24-21-1-0. The Greyhounds drop their fifth in a row, falling to 20-23-2-0 as they remain six points out of a playoff spot in the Western Conference.
GAME CENTRE

OTTAWA 6, NIAGARA 0
The Ottawa 67’s made quick work of visiting Niagara, skating to a 6-0 win while outshooting the IceDogs 55-27. Overage defenceman Noel Hoefenmayer (16, 17) scored twice, increasing his output to a league-leading 62 points (17-45–62) for OHL defencemen. Joseph Garreffa (26), Daylon Groulx (11), Alec Belanger (8) and Mitchell Hoelscher (27) also scored Ottawa goals, with Garreffa wrapping up the afternoon with a goal and three helpers. Will Cranley stopped all 27 shots he faced in the Ottawa crease to improve to 11-1-0-0 on the season and record his second straight shutout. Niagara’s Christian Sbaraglia was kept busy, turning in a 49-save performance. Ottawa has won five in a row, improving to a league-leading 35-7-0-0. Niagara drops to 17-22-4-1 and into a third place tie with Barrie in the Central Division.
GAME CENTRE