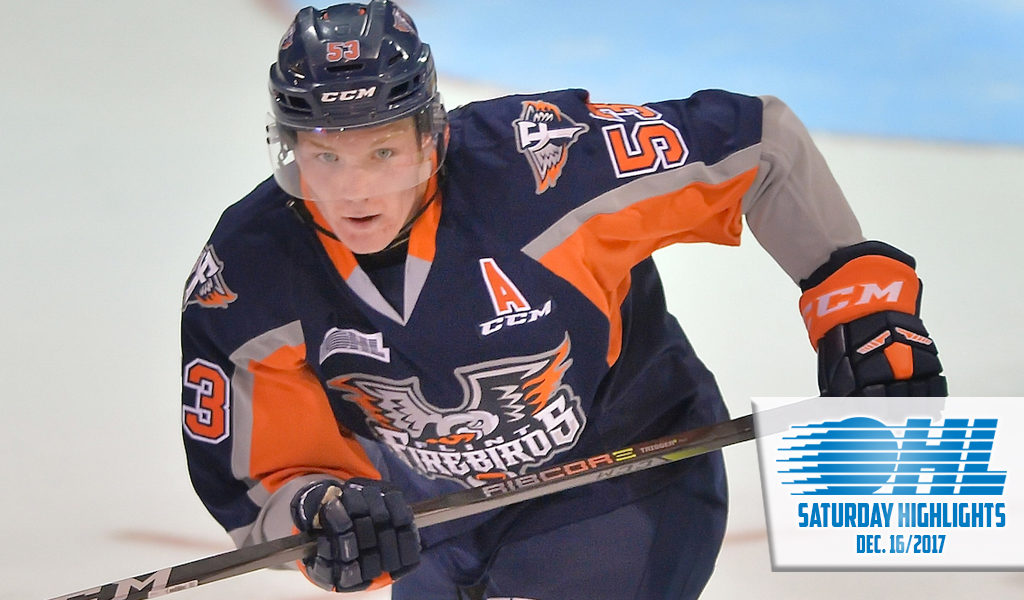 FLINT 5 – SARNIA 2
Ty Dellandrea (10, 11, 12) hit the empty net twice, but they all count as the sophomore forward registered a career-high five points along with his first OHL hat-trick in a 5-2 Flint Firebirds win in Sarnia. Connor Roberts (6) and Maurizio Colella (12) provided other Flint goals as the Firebirds climbed out to a 3-0 lead. Sarnia drew within a goal with second period goals 13 seconds apart from Theo Calvas (2) and Anthony Salinitri (15) but that’s as close as they’d come. Justin Fazio made 35 saves in the loss as Sarnia falls to 25-8-2-0. Flint snaps a four-game skid as Garrett Forrest turned in a 28-save performance, helping the Firebirds improve to 10-20-3-0.
GAME CENTRE

SAULT STE. MARIE 7 – GUELPH 1
The Sault Ste. Marie Greyhounds pushed their winning streak to 20 games as Philadelphia Flyers prospect Morgan Frost (18, 19) had a four point outing in a 7-1 road victory over Guelph. Frost stretches his current point streak to 11 games, 10 of which have been multi-point efforts. Former Storm defenceman Noah Carroll (2) also had a productive afternoon with a goal and three assists while 2018 NHL Draft prospect Barrett Hayton (12) scored twice and added an assist. Ryan Roth (8) and Joe Carroll (4) also provided markers as the Hounds improved to a CHL-leading 29-3-2-0 record. Los Angeles Kings prospect Matthew Villalta stopped 25 of the 26 shots he faced, surrendering Guelph’s lone goal off the stick of Isaac Ratcliffe (14). The Hounds took the shooting column 39-26.
GAME CENTRE

KINGSTON 2 – OWEN SOUND 1 – SO
Carolina Hurricanes prospect Jeremy Helvig was the difference, stopping 36 of the 37 shots he faced to guide the Kingston Frontenacs to a 2-1 road shootout win in Owen Sound. Helvig’s Frontenacs were outshot 37-20 but the veteran netminder denied both Nick Suzuki and Aidan Dudas in the shootout while Matt Hotchkiss and Jason Robertson converted on their opportunities. The Fronts managed to hold the Attack to 0-for-5 on the power play while Linus Nyman (12) scored their only goal in regulation. Ethan Szypula (5) provided Owen Sound’s lone marker as the Attack earn a single point in the shootout loss. Olivier Lafreniere made 19 saves in his Owen Sound Attack debut. Kingston improves to 17-9-3-3, six points behind first place Hamilton in the East Division.
GAME CENTRE

WINDSOR 5 – SAGINAW 1
Cole Purboo (10, 11) had a four-point night with two goals and two assists to lead the Windsor Spitfires to a 5-1 road win in Saginaw. Purboo now has points in nine consecutive games. Lucas Patton made 27 saves to earn his first OHL win while Jake Smith (7), Curtis Douglas (9) and Austin McEneny (1) also found the back of the net. Smith finished the night with a goal and two assists in a game that featured just one minor penalty. Entering the game tied with Saginaw in the West Division, the Spits climb back ahead with a record of 18-11-2-1. Damien Giroux (13) scored the lone Spirit goal as Saginaw sees a three-game winning streak come to an end.
GAME CENTRE

BARRIE 5 – NIAGARA 3
The Barrie Colts had goals from five different players, defeating the visiting Niagara IceDogs 5-3 in a battle of Central Division foes. The win creates some distance between the Colts and IceDogs in the battle for first in the Central as Barrie climbs six points ahead of Niagara with the win. Aaron Luchuk (31), Lucas Chiodo (12), Jason Willms (18), Zach Magwood (16) and Jaden Peca (5) all lit the lamp for the Colts as they outshot the IceDogs 34-22. Kirill Maksimov (20), Johnny Corneil (8) and Danial Singer (13) responded with goals for the IceDogs while Stephen Dhillon made 29 saves. Barrie improves to 20-10-2-1.
GAME CENTRE

LONDON 3 – MISSISSAUGA 1
Overage winger Tyler Rollo (6, 7) scored twice while blueliner Shane Collins (1) picked up his first OHL goal in a 3-1 London Knights win over the visiting Mississauga Steelheads. The low-shooting affair featured just 43 shots between the two clubs as the Knights prevailed, improving to 17-14-2-0. Evan Bouchard registered a pair of assists for London while Mississauga’s lone marker came off the stick of Shaw Boomhower (8). The Steelheads were held to 0-for-5 on the man advantage and fall to 12-20-0-1.
GAME CENTRE