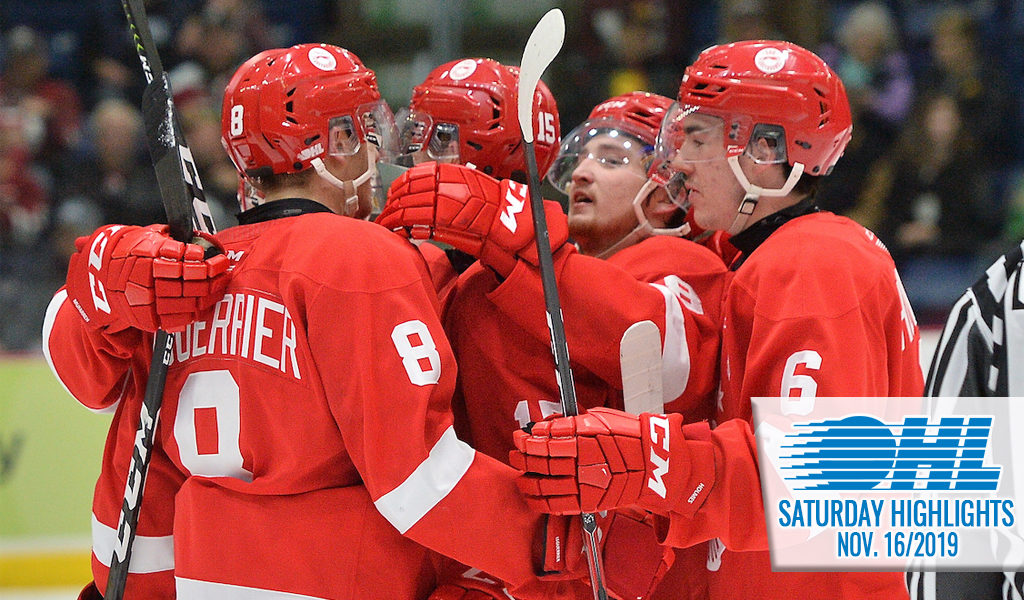 SOO 3, OSHAWA 1
The Soo Greyhounds felt the sting of seven straight losses and are on the way back up the mountain, defeating visiting Oshawa 3-1 for their third straight win as Tye Kartye (8), Jaromir Pytlik (9) and Billy Constantinou (5) scored goals. Overage netminder Bailey Brkin made 22 saves for his third consecutive victory while Oshawa’s Zachary Paputsakis made 21 saves across the ice. Brett Harrison (4) provided the lone goal for Oshawa as the Generals dropped a second straight decision. The Hounds improve to 9-12-1-0 while the Generals fall to 14-5-0-1.
GAME CENTRE

ERIE 5, MISSISSAUGA 4 – OT
Pennsylvania’s own Austen Swankler (6, 7) tied things up with 1:18 left in the third period before striking for the overtime winner with six seconds to go in the extra frame as the Erie Otters edged visiting Mississauga 5-4. Swankler’s second straight multi-point outing helped the Otters rally from a 4-2 deficit to come back and take two points on home ice as Brendan Hoffmann (3), Hayden Fowler (10) and Brendan Sellan (3) also scored Erie goals. Draft eligible blueliner Jamie Drysdale picked up an assist on the winner, giving him three helpers on the night while goaltender Aidan Campbell made 35 saves. Luca Del Bel Belluz (1), Cole Schwindt (4), Richard Whittaker (5) and Keean Washkurak (8) scored Mississauga goals in front of a 37-save performance from Kai Edmonds. The Otters played their third straight game beyond regulation, improving to 10-6-2-3 while Mississauga is 6-12-1-0.
GAME CENTRE

NIAGARA 3, WINDSOR 2 – OT
The Niagara IceDogs got the job done at home on Saturday as Minnesota Wild prospect Ivan Lodnia (10) beat the buzzer on a breakaway with 1.1 seconds left to spare in overtime. The Dogs defeated visiting Windsor 3-2 as newly acquired defenceman Adrien Beraldo (1) scored his first as an IceDog and set up Lodnia’s overtime winner. Andrew Bruder (3) scored a highlight reel marker 5:35 into the third period to put Niagara ahead 2-1 but Windsor’s Cole Purboo (7) forced overtime with his tying goal that came with 32 seconds left in the third period. IceDogs goaltender Tucker Tynan made 24 saves in the win opposite Windsor’s Kari Piiroinen who turned aside 34. Will Cuylle (6) joined Purboo in scoring for the Spitfires as Windsor went to overtime for the third straight game. Niagara improves to 7-11-3-1 for third in the Central Division while the Spitfires earn a point in a 10th straight game, sitting atop the West Division with a 12-3-3-0 record.
GAME CENTRE

KINGSTON 3, OWEN SOUND 1
The Kingston Frontenacs busted out a lengthy funk, winning their first game since October 11th as goaltender Ryan Dugas made 41 saves in a 3-1 road win over Owen Sound. Shane Wright (6) had a goal and an assist while defencemen Lucas Peric (2) and Nick King (1) both found the back of the net, helping the Frontenacs snap a 12-game drought while captain Jakob Brahaney picked up a pair of assists. Barret Kirwin (9) provided the lone Attack goal in front of rookie goaltender Nick Chenard who made 27 saves. The Bears outshot the Fronts 42-30 but fell to 10-7-2-1. Kingston wins its second game of the season, improving to 2-14-2-2.
GAME CENTRE

OTTAWA 4, FLINT 2
Joseph Garreffa (8, 9, 10) enjoyed his fourth multi-goal outing of the season, scoring the game winner as part of a hat-trick as the Ottawa 67’s took a 4-2 win in Flint. Ottawa scored three third period goals as Garreffa set up Kevin Bahl (3) for Ottawa’s other tally on the evening. Cedrick Andree was big when called upon, making 37 saves as the 67’s handed the Firebirds just their third home loss of the season. Belarusian countrymen Evgeniy Oksentyuk (11) and Vladislav Kolyachonok (5) provided Flint goals as the ‘Birds outshot Ottawa 39-33 in the loss. The 67’s improve to 14-6-0-0 while Flint falls to 13-7-0-0.
GAME CENTRE

GUELPH 2, SAGINAW 1
Cedric Ralph (10, 11) potted a pair as the Guelph Storm skated to their eighth straight win, defeating the Saginaw Spirit 2-1 on home ice. Nico Daws turned aside 26 of 27 while big blueliner Fedor Gordeev picked up a pair of assists as the Storm remained atop the Midwest Division improving to 11-4-1-2. Ilya Solovyov (2) provided Saginaw’s lone marker as the Spirit saw their three-game winning streak snapped and fell to 12-7-1-1. The eight consecutive wins is the Storm’s longest winning streak since the 2013-14 season.
GAME CENTRE

BARRIE 2, PETERBOROUGH 0
Jet Greaves stopped all 33 shots he faced for his second shutout of the season as the Barrie Colts nipped visiting Peterborough 2-0. Rookie forward Jacob Frasca (4) scored in a second straight game before St. Louis Blues prospect Tyler Tucker (4) added insurance, giving the Colts all they’d need to ride to victory on Friday. Peterborough outshot Barrie 33-29 as Petes goaltender Hunter Jones made 27 saves in the loss. The Colts win their seventh in the last 10, improving to 12-6-0-1 while Peterborough owns a 14-6-1-0 record atop the East Division. The Petes remained without injured forward Nick Robertson on Saturday.
GAME CENTRE