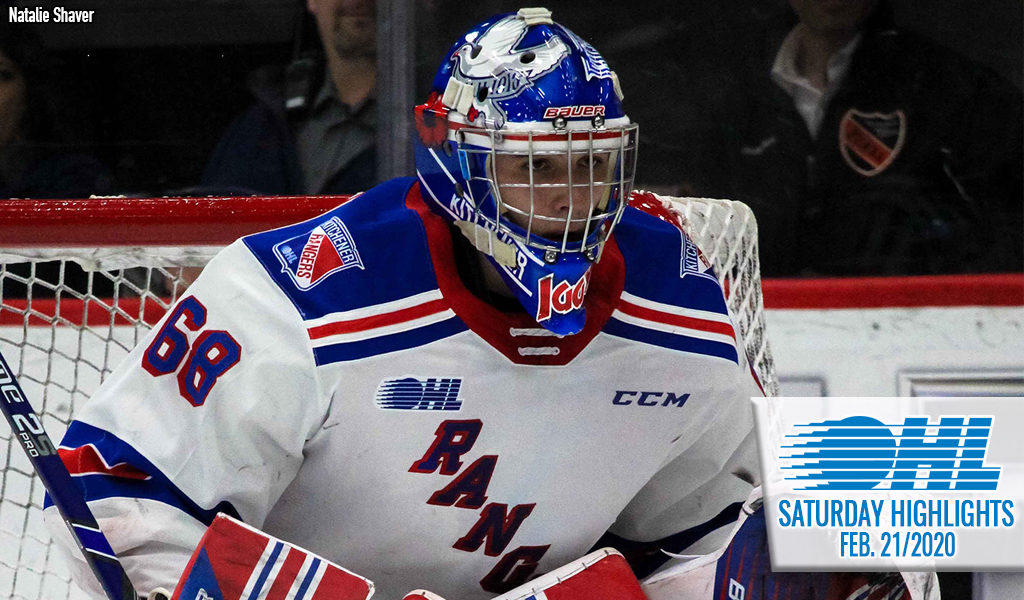 KITCHENER 4, FLINT 1
Los Angeles Kings prospect Jacob Ingham stopped 45 of 46, halting the Flint Firebirds’ winning streak at an impressive 15 games as the Kitchener Rangers took a 4-1 road win. The Firebirds outshot the Rangers 15-1 out of the gate before Mike Petizian (18) gave the Blueshirts the lead with less than five minutes to go in the first. Rookie Joseph Serpa (3) provided insurance 6:20 into the second before Flint captain Ty Dellandrea (32) cut the lead to one. Fellow Dallas Stars prospect Riley Damiani (26) reinstated the two-goal cushion with a shorthanded, unassisted marker 1:21 into the third. Petizian’s (19) second of the night put things out of reach as the Rangers handed the Firebirds their first loss since Jan. 18th. Flint outshot Kitchener 46-33 as the Rangers made the Firebirds wait another day to clinch a playoff spot. Kitchener climbs into first place in the Western Conference with a 36-14-5-2 mark, having won three in a row. Flint maintains first place in the West Division with a 37-18-1-1 record.
GAME CENTRE

OSHAWA 5, HAMILTON 2
The Oshawa Generals skated to a 5-2 win before a national viewing audience on Sportsnet, picking up two points on the road in Hamilton. A native of nearby Stoney Creek, Ont., Ryan Stepien (9) earned first star honours, scoring the game winner while adding an assist. The Generals climbed out to a 3-0 lead by the midway point of action as Kyle MacLean (12) and Brett Neumann (42) joined Stepien with goals. Hamilton clawed back to within two as Tag Bertuzzi (23) and Arthur Kaliyev (42) scored less than two minutes apart in the latter half of the second. Philip Tomasino (39) reinstated the two-goal cushion before the second expired and Mitchell Brewer (2) hit the empty net to seal the deal on Oshawa’s sixth consecutive game collecting at least a point. The Generals outshot the Bulldogs 29-22 as Zachary Paputsakis earned the win, pushing the Generals’ record to 29-18-5-4, two points back of second place Peterborough in the East Division. Hamilton sits sixth in the Conference with a 24-26-6-1 record.
GAME CENTRE

BARRIE 5, WINDSOR 3
The Colts fell behind 2-0 before overage winger Aidan Brown (16, 17, 18) recorded his first OHL hat-trick as part of a career-high four point performance in a 5-3 win over visiting Windsor. Egor Afanasyev (27) and Luke Boka (17) spotted the Spitfires a 2-0 lead before Tyson Foerster (31) and Brown drew things even before the first expired. Tyler Angle (27) put Windsor back in front at the midway point of the second but the Colts would rally for three unanswered, with Victor Hadfield (8) tying things up at three. Brown scored his second of the night 13 seconds later and completed the hat-trick 3:48 into the third period. Vancouver Canucks prospect Arturs Silovs was a difference-maker, stopping 42 of 45 as the Colts were outshot 45-21. Windsor’s Luke Boka played in his 306th career regular season game, tying John Scott Dickson for the Spitfires’ all-time lead. He’s set to make franchise history on Sunday in Oshawa. The Colts improve to 27-23-3-2 with a third straight win, pulling into a first place tie with Sudbury atop the Central Division. Windsor has now dropped three in a row, falling to 32-18-5-0.
GAME CENTRE

ERIE 7, OWEN SOUND 4
Austen Swankler (15, 16) scored a pair of late second period goals just over a minute apart to turn the tide and lead the Erie Otters to a 7-4 win in Owen Sound. Brendan Sellan (8, 9) and Chad Yetman (35, 36) joined in with two goals apiece while veteran defenceman Jacob Golden picked up three assists. Maxim Golod (22) also scored for the Otters, opening the scoring 3:10 into action. Barret Kirwin (25, 26) was a bright spot for the Attack with a pair of goals while other markers came from Brady Lyle (19) and Andrew Perrott (4). Lyle’s 19 goals are the most by an Attack defenceman since Chris Bigras scored 20 during the 2014-15 season. Daniel Murphy stopped 35 of 39 for the win in the Erie crease as the Otters improved to 24-21-4-7, pulling into a seventh place tie with the Attack in the Western Conference. Owen Sound’s Nick Chenard stopped all 11 shots he saw in relief as the Bears dropped their fourth in a row, falling to 26-22-4-3.
GAME CENTRE