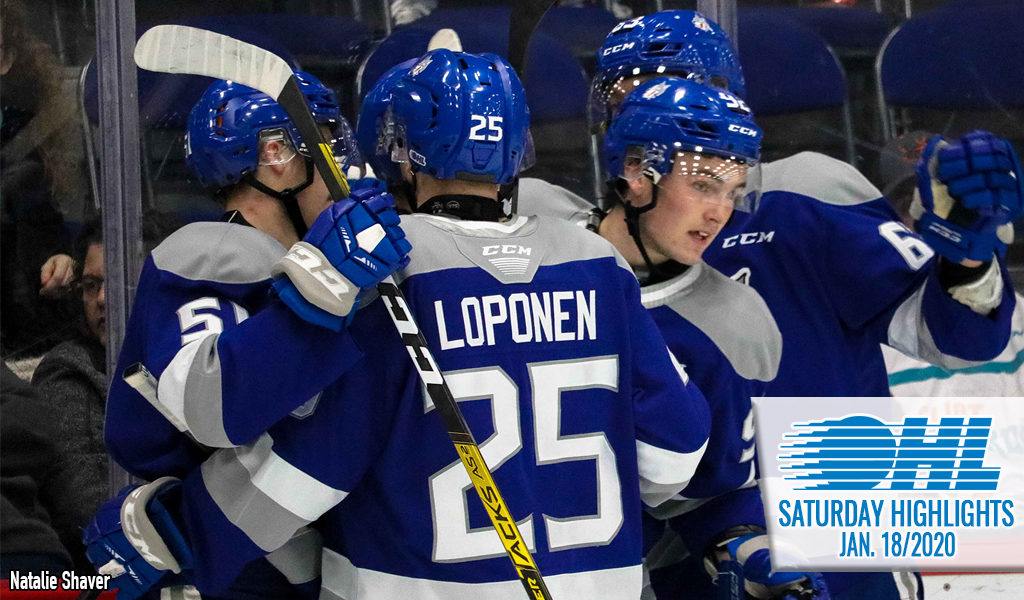 SUDBURY 5, SARNIA 4
A back-and-forth game went the way of the visiting Sudbury Wolves on Saturday afternoon in Sarnia as Quinton Byfield (26) scored the deciding goal midway through the third period in a 5-4 outcome. Sudbury climbed ahead 2-0 on first period goals from David Levin (20) and Matej Pekar (18) before a pair of Jacob Perreault (27, 28) goals less than a minute apart in the second period knotted things up at two. Second-year forward Theo Hill (8) gave the Sting a 3-2 edge early in the third before Sudbury regained the momentum, scoring three straight with Emmett Serenstis (1) and Blake Murray (18) joining Byfield in the scoring column. Brayden Guy (10) would score a late one for Sarnia but that’s as close as the Sting would come, falling for the 12th time in the past 13 games. Byfield finished with a goal and three assists for the Wolves while Mitchell Weeks made 29 saves in goal. Sudbury rebounds from a Friday night loss to improve to 22-20-1-0 atop the Central Division. Sarnia captain Ryan McGregor recorded a pair of assists as he played in his 268th career regular season game, the most in Sting franchise history.  Sarnia is now 16-24-4-0 at the bottom of the Western Conference.
GAME CENTRE

WINDSOR 4, ERIE 3
Third period goals from Kyle McDonald (11) and Daniel D’Amico (17) propelled the Windsor Spitfires past visiting Erie 4-3 in a closely matched bout of Western Conference opponents. Ruben Rafkin (2) and Curtis Douglas (17) also scored Windsor goals as the Spits kept things going in the right direction, improving to 26-9-5-0. Xavier Medina made 28 saves for the win, surrendering Erie goals from Chad Yetman (24), Kyen Sopa (17) and Hayden Fowler (15) while Jamie Drysdale and Max Golod each had a pair of assists. Aidan Campbell made 26 saves in the Erie crease as the Otters saw their three-game winning streak snapped, falling to 19-15-2-6.
GAME CENTRE

OTTAWA 5, HAMILTON 0
Top NHL Draft prospect Jack Quinn (32, 33, 34) scored his third hat-trick in the month of January and Will Cranley stopped all 27 shots he faced as the Ottawa 67’s defeated visiting Hamilton 5-0 for their 13th straight home win. New Jersey Devils prospect Mitchell Hoelscher (23, 24) provided two others for the 67’s in addition to two assists as the Barber Poles outshot the Bulldogs 36-27 and went 3-for-4 on the power play. Hamilton’s man advantage was held to 0-for-8 on the afternoon as goaltender Zach Roy turned aside 31 shots. Ottawa has won three in a row and 20 of their last 21 to lead the OHL with a 33-7-0-0 record. Hamilton falls to 18-20-2-1 for sixth in the Eastern Conference.
GAME CENTRE

KITCHENER 6, GUELPH 3
The Kitchener Rangers stretched their run of undefeated hockey in regulation to 11 games, doubling-up the Guelph Storm 6-3 on the road. Florida Panthers prospect Greg Meireles (21, 22) scored twice while Liam Hawel (12), Mike Petizian (11), Declan McDonnell (11) and Jonathan Yantsis (31) added singles as the Rangers improved to 4-2 against Guelph this season. Newcomer Holden Wale picked up a pair of assists for Kitchener while Jacob Ingham made 28 saves for the win. Danny Zhilkin (5), Eric Uba (15) and Pavel Gogolev (32) scored for the Storm as they remained without injured goaltender Nico Daws. Owen Bennett turned aside 25 shots in the loss as the Storm dropped their sixth in a row, falling to 22-14-1-4. The Rangers sit tied with Saginaw atop the Western Conference, boasting a 26-11-4-2 record.
GAME CENTRE

MISSISSAUGA 5, BARRIE 2
Nicholas Canade (12, 13, 14) bagged his second hat-trick of the month as the Mississauga Steelheads defeated the host Barrie Colts 5-2 for their third straight win. James Hardie (22) and Calvin Martin (12) also found the back of the net while Kai Edmonds made 34 saves against his former club. Kubota CHL/NHL Top Prospects Game hero Tyson Foerster (22, 23) provided both Barrie goals and Jet Greaves made 35 saves as the Colts suffered a sixth straight loss, falling to 16-21-2-2. Mississauga improves to 19-22-2-1, four points back of first place Sudbury in the Central Division.
GAME CENTRE

NORTH BAY 3, NIAGARA 1
Captain Luke Moncada (22, 23, 24) broke up a scoreless game with 6:20 left in the third period and proceeded to bury a pair of empty netters for the hat-trick in a 3-1 North Bay Battalion road win in Niagara. Rookie goaltender Joe Vrbetic stood tall, making 28 saves to help the Troops snap a six-game slide. Niagara’s Andrew MacLean stopped 28 of 29 as the IceDogs couldn’t muster enough offence to battle back against the Battalion. Anthony Agostinelli (3) provided Niagara’s lone goal with 43 seconds remaining in regulation. North Bay improves to 10-30-2-0 while Niagara drops to 16-20-4-1 for seventh in the Eastern Conference.
GAME CENTRE

PETERBOROUGH 2, FLINT 0
Minnesota Wild prospect Hunter Jones made 30 saves for his third shutout of the season and second straight on home ice, backstopping the Peterborough Petes past visiting Flint 2-0. Toronto Maple Leafs prospects Nick Robertson (29) and Semyon Der-Arguchintsev (7) scored first period goals and that’s all the offence the Petes would need as they silenced the Firebirds the rest of the way. The Petes climb to 27-13-2-1, holding a tight grip on third in the Eastern Conference. Veteran netminder Anthony Popovich stopped 36 as the Firebirds dropped a second straight on the weekend, falling to 22-17-1-1.
GAME CENTRE

SAGINAW 5, SOO 1
The Saginaw Spirit skated to a fourth straight win, defeating the Soo Greyhounds in the back-end of a home-and-home as DJ Busdeker (8, 9) had two goals and an assist in a 5-1 triumph at the Dow Event Center. Danil Antropov (9), Blade Jenkins (8) and Dalton Duhart (8) also lit the lamp as the Spirit scored at least five goals in a seventh straight game, outshooting the Hounds 36-22. Montreal Canadiens prospect Jacob LeGuerrier (5) scored Sault Ste. Marie’s lone marker while Nick Malik got the call for a second straight night, making 31 saves in the loss. Saginaw’s Marshall Frappier stopped 21 of 22 to improve to 14-5-1-1 on the campaign. The Spirit sit tied atop the Western Conference with the Kitchener Rangers, owning a 27-12-2-2 record. The Hounds have lost three in a row and sit fourth in the West Division at 20-21-2-0.
GAME CENTRE