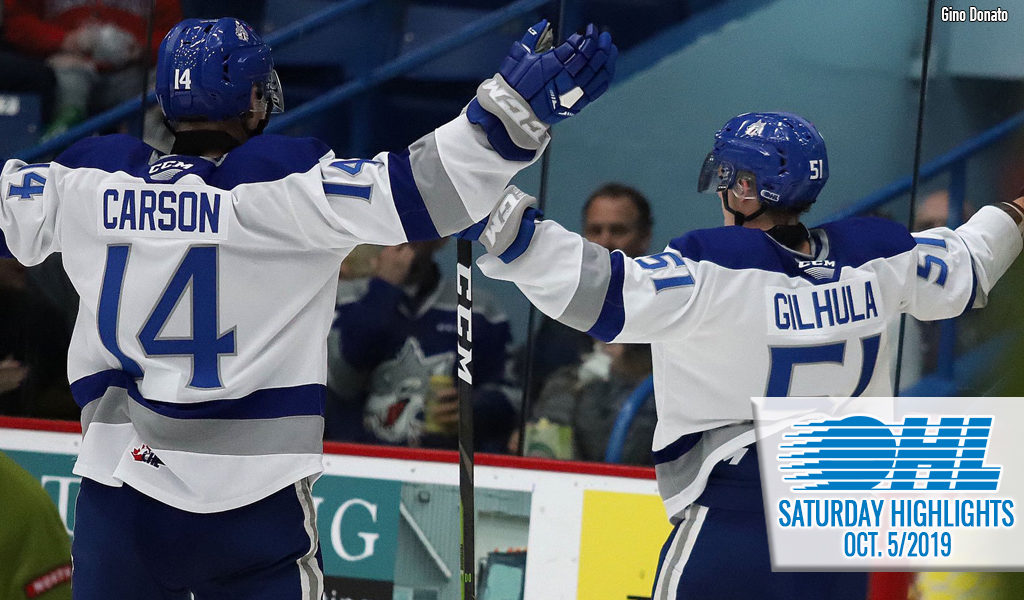 SUDBURY 4, SOO 3
David Levin (2) had a goal and two assists as the Sudbury Wolves skated to their fifth straight win, handing the Soo Greyhounds their first loss in a 4-3 decision. Sudbury opened up a 3-0 lead in the opening half of the first period on goals from Owen Gilhula (4), Owen Robinson (1) and Macauley Carson (3). Sault Ste. Marie’s Jaden Peca (1, 2) and Levin exchanged goals before the first expired as Sudbury led 4-1 after 20 minutes. The host Greyhounds pulled to within a goal on a penalty shot marker from Peca before defenceman Ryan O’Rourke (3) scored with 2:19 to go in the second. The Hounds outshot the Wolves 10-4 in the third period but Christian Purboo stood tall, turning aside 28 saves on the night for the win. Sudbury improves to 5-2-0-0 atop the Central Division while the Soo falls to 4-1-0-0.
GAME CENTRE

WINDSOR 3, BARRIE 2 – SO
Egor Afanasyev and Daniel D’Amico scored shootout markers as the Windsor Spitfires edged visiting Barrie 3-2. Kari Piiroinen made 36 saves on the night before turning aside two of the three Barrie shooters he faced to lock down a Spitfires victory on home ice. Tyler Angle (4) and D’Amico (2) scored goals in regulation for the Spits while Finnish blueliner Ruben Rafkin picked up his seventh assist in six games this season. Tyson Foerster (5) opened the scoring 30 seconds into the first period for the Colts. Riley Piercey would knot things at two 6:13 into the third to eventually send things into overtime. Arturs Silovs helped the Colts earn a single point in Warren Rychel’s return to the WFCU Centre with a 22-save showing. Windsor improves to 4-1-1-0 to start the season while Barrie falls to 4-1-0-1.
GAME CENTRE

OWEN SOUND 7, FLINT 3
The Flint Firebirds saw their four-game winning streak come to an end as the Owen Sound Attack had three-point efforts from Aidan Dudas (2) and Adam McMaster (1) in a 7-3 win on home ice. Kirill Nizhnikov (2, 3) scored twice for the Bears while Matthew Philip (2), Kaleb Pearson (3) and Sergey Popov (2) also found the twine. Perhaps the most telling statistic on Saturday was Owen Sound’s 2-for-3 night on the power play while holding Flint to just 1-for-10 on theirs. Mack Guzda made 29 saves for the win opposite Flint’s Luke Cavallin who turned aside 27. Riley McCourt (2), Ty Dellandrea (2) and Braeden Kressler (1) scored Flint goals while Dellandrea finished the night with a goal and two helpers. Owen Sound improves to 3-2-0-1 while Flint falls to 4-2-0-0.
GAME CENTRE