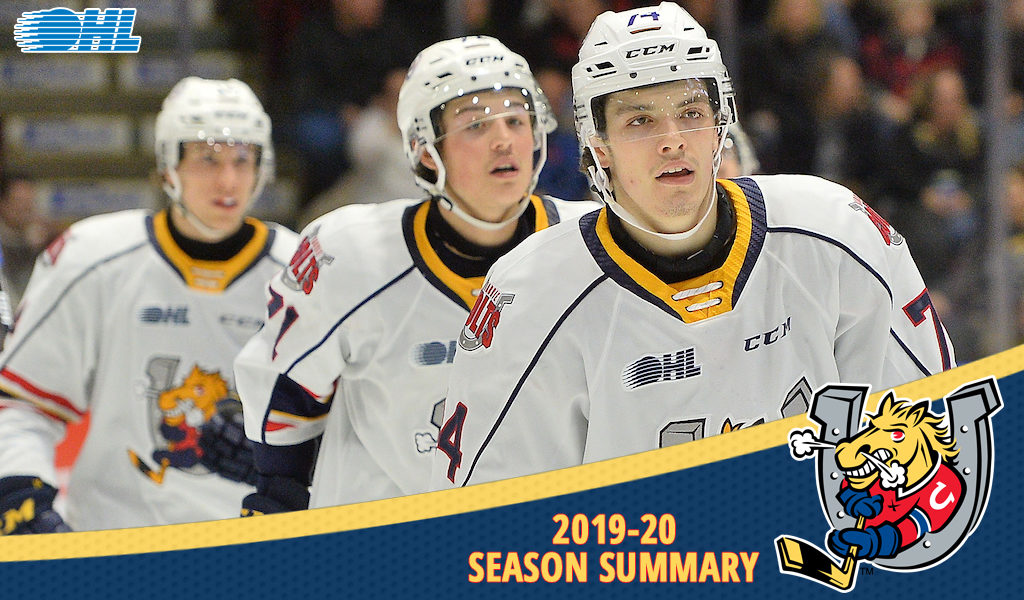 The season certainly came with its highs and lows, but the Barrie Colts (29-28-4-2) rounded out their 2019-2020 campaign fairly comfortably in the Central Division’s second place slot with some young starpower to show for it.

Things began on a sombre note when it was announced head coach Dale Hawerchuk would be taking a leave of absence as he battled stomach cancer. A rash of injuries and a coaching change followed, and the team often struggled to emerge victorious consistently until late in the season. The Colts moved some veteran names mid-season as Carolina Hurricanes prospect Ryan Suzuki (Saginaw) and fourth-year veteran Tyler Tucker (Flint) both joined Michigan-based contenders. With the onus on the younger core, there were a few explosive performances throughout the season; one in particular that has had NHL heads talking.

Amidst the trades, the coaching changes, and the team’s journey in and out of the win column, there’s one thing that remained a constant: everyone was doing it all for Dale this season.

The bench boss shuffle
News of Dale Hawerchuk’s cancer diagnosis in October shook the hockey world. He stepped away from the Barrie bench to concentrate on treatment and his absence was filled by Warren Rychel. The squad went 16-21-2-2 under Rychel’s leadership, losing some steam toward the end of the three-time Memorial Cup champion’s tenure. Long-time assistant coach Todd Miller stepped up in the interim. The Miller era kicked off on a positive note with a 5-0 blanking of the Oshawa Generals and the team hit the ground running with a 3-0-0-0 start and an 8-1-1-0 record in Miller’s first 10 games. The change of pace appeared well-receieved and the team was able to reclaim their second place division standing below the Sudbury Wolves.

Foerster makes a name for himself
Local product Tyson Foerster had a breakout season to remember, stamping his mark as an “up and comer” in a deep NHL draft class that boasts a wealth of OHL talent. Following a 23-point (10-13—23) rookie campaign, the 18-year-old winger returned for a dominant sophomore stint as a driving offensive force in the Colts lineup. Foerster led the team with 36 goals and 80 points on the season, turning heads over the course of his NHL Draft year with an impact that was praised by Director of NHL Central Scouting Dan Marr. He emerged with a newfound confidence on account of his increased ice time and leadership that has undoubtedly translated on the ice. He also treated fans and scouts alike to a spectacular performance at this past January’s Kubota CHL/NHL Top Prospects Game. His developmental gains have surely paid off as he now sits 21st among all North American skaters in NHL Central Scouting’s final 2020 Draft Rankings, quite the jump from his midterm ranking of 41.

Clarke’s grand entrance
Newcomer Brandt Clarke’s performance on Barrie blue line was surely a point of optimism this season. Drafted fourth overall out of the GTHL and OHL Cup champion Don Mills Flyers program, the now 17-year-old mobile defender had an explosive entrance to the league when he registered five goals and 10 points (including a hat-trick) right off the bat in six preseason games. His skill with the puck carried throughout his rookie campaign, and he went on to lead not only all OHL rookie defencemen, but all Barrie defencemen with a total of 38 points (6-32—38) to his name, a new franchise record for points by a 16-year-old d-man. He was tested on the power play and penalty kill units, registering nine power play assists and one shorthanded helper, and was also given his shot in the shootout on two separate occasions, registering one goal. Notably, he was also good for six points (1-5—6) over five games at the U17s with Canada Black in the fall. If Clarke’s dynamic start is any indication, the future in Barrie is looking bright.

Paving the way for Vierling and the young guns
As one of the youngest teams in the league, the path was paved for guys like Foerster, Clarke and Dallas Stars prospect Nicholas Porco to excel and compliment the experienced presence of third-year winger Anthony Tabak, overager Aidan Brown and added veteran Josh Nelson. Ahead of the deadline, the Colts traded away overage captain Jason Willms along with their NHL prospect talent in Carolina Hurricanes pick Ryan Suzuki, Buffalo Sabres draftee Matej Pekar and St. Louis Blues hopeful Tyler Tucker. They took on another impactful youngster in Evan Vierling, who nestled seamlessly into his new spot as the first line centreman, recording 34 points (12-22—34) in the 28 games he suited up for. Fellow sophomore Ethan Cardwell put forth consistent numbers as well, posting 47 points (23-24—47) in his 63-game showing. Cardwell became the first Colts player since Mark Scheifele (Mar. 8, 2013) to score four goals in a single period when he pulled off the feat against the Hamilton Bulldogs on Jan. 25, 2020.

A new name to call home
Coaching wasn’t the only major shake-up surrounding the Colts club this past season. The arena that had been known as the Barrie Molson Centre or the BMC since its opening in 1995 was renamed the Sadlon Arena as of November upon city council’s approval of a naming rights offer from Paul Sadlon Motors Inc.