Second round picks Lennox and Cardwell commit to Spirit 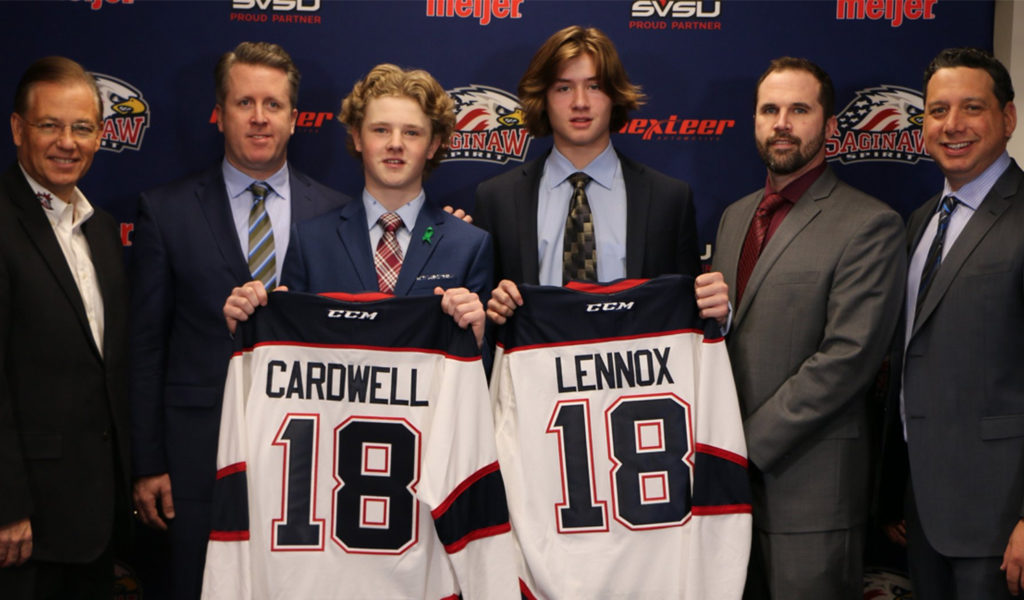 Drinkill released a statement on both players Friday morning that read: “As an organization, we are very happy that we could come to terms on an OHL Standard Player Agreement so quickly with our two second round picks from the 2018 draft, Tristan Lennox and Ethan Cardwell. Both players are very excited to start their careers in Saginaw and that means a lot to our franchise as we continue to build towards our end goals. We are looking forward to seeing both players on the ice at our prospect camp in May along with the rest of our draft class as we start the process of building the Spirit team for the 2018-19 season.”

.@Lennox30, was the first goaltender selected in the 2018 OHL Draft as the 26th overall pick

Lennox, 15, from Mississauga, Ontario was the first goaltender taken in the 2018 Priority Selection Draft (26th overall). Lennox played for his hometown Mississauga Reps Minor Midget team during the 2017-18 season and appeared in the OHL Cup, posting a 1.91 goals against average and a .915 save percentage.

“Words can’t describe how excited I am right now,” said the newly signed Spirit goaltender. “I just want to get started right away. I am here to win games and take this team to another level.”

Cardwell, 15, from Courtice, Ontario was selected by the Spirit with the 33rd overall pick in the 2018 Priority Selection Draft. Cardwell played the Clarington Toros Minor Midget during the 2017-18 season, positing 30 goals and 24 assists in 35 games.

.@EthanCardwell12, recorded 44 goals, 43 assists for a total of 77 points while playing in 57 games for the @02AAToros of the @HometownHockey pic.twitter.com/ngpNaewHsb

“I have heard all great things from the Saginaw Spirit organization,” said Carwell in a press conference Friday at The Dow Event Center. “I met Dave (Drinkill) and Angelo (Nasato) earlier this year and just felt great vibes from them. We have an up-and-coming group with a bright future.”

Both Lennox and Cardwell will report to Saginaw for Prospect Camp coming up in May with dates to be released at a later time.