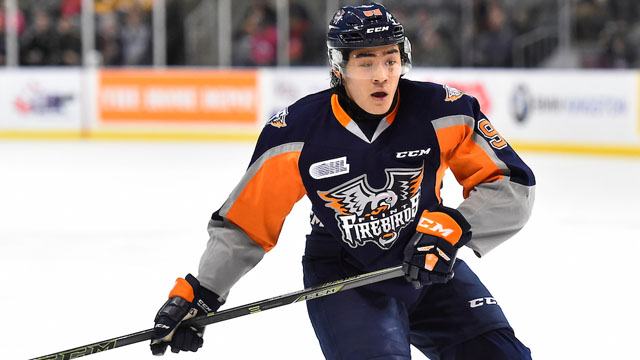 It was a night to remember for Columbus Blue Jackets prospect Kole Sherwood.

The 19-year-old completed a first period hat-trick en route to a five goal, two assist performance to lead the Flint Firebirds to an 11-2 road win over the rival Saginaw Spirit on Tuesday.

Sherwood finished the night one goal shy of the OHL single game mark of six accomplished 10 different times over the course of league history. The feat hasn’t been accomplished since October 13, 1988 when Colin Miller of the Niagara Falls Thunder buried six against the North Bay Centennials.

The Firebirds set a new club record with 11 goals in the win, reaching the 10-goal mark for the first time in franchise history since the Plymouth Whalers did so in a 10-2 win over Sarnia on February 18, 2013.

Sherwood enters Friday’s action in Niagara on a six game point streak that has included seven goals, nine assists and 16 points dating back to December 30th. He sits second in Firebirds team scoring with 46 points (20-26–46) over 36 games this season.