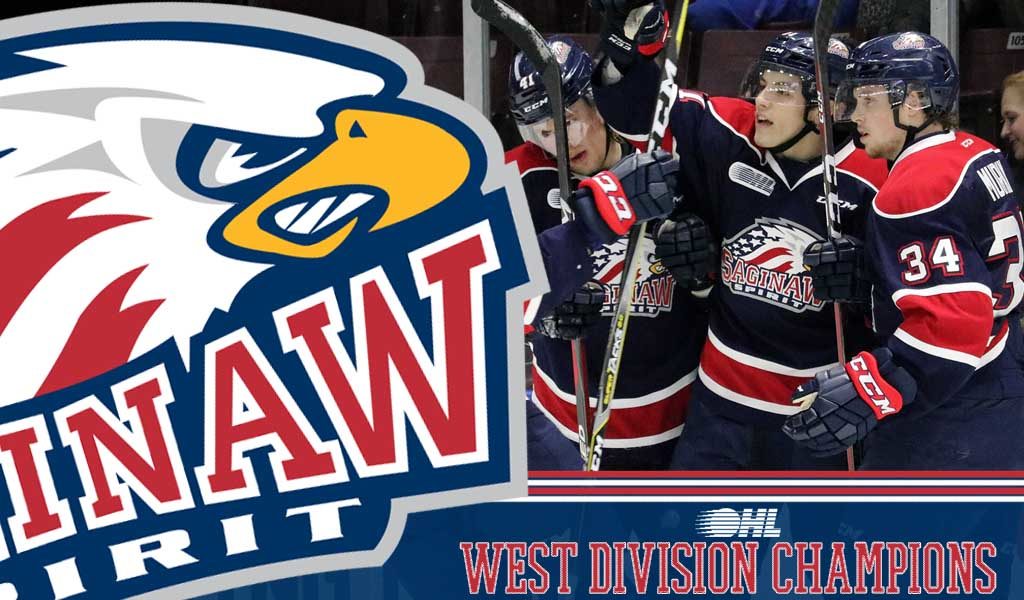 The Saginaw Spirit are 2019 West Division champions, securing their second Bumbacco Trophy in franchise history and first since 2011.

The division title was secured despite a 2-1 overtime loss to the visiting Sault Ste. Marie Greyhounds on Thursday. The Spirit, who face the Hounds to close out the campaign in Sault Ste. Marie on Sunday, would win a tie-breaker between the two clubs based off head-to-head season series points should they be tied in points and regulation-overtime wins following Sunday’s contest.

Enjoying their best season in the franchise’s 17-year history, the Spirit unseat the incumbent Greyhounds who had won four of the past five division titles. Saginaw has won a franchise-high 45 games this season and saw a record nine-game winning streak come to an end on Thursday.

The 45-15-3-3 Spirit have played to a 34-6-2-2 record since Chris Lazary took over the club’s head coaching job on November 18th as general manager Dave Drinkill has added key pieces in Owen Tippett, Ryan McLeod, Reagan O’Grady and Justin Murray along the way.

While returnees in Cole Coskey and Blade Jenkins have continued their steady production, the Spirit have greatly benefitted from offseason additions in rookie standout Cole Perfetti who leads OHL freshmen with 36 goals and 73 points as well as NHL prospects in goaltender Ivan Prosvetov and defenceman Bode Wilde.

Congrats to @SpiritHockey for clinching the #OHL West Division title.

The Spirit are the least-penalized team in the OHL this season and have demonstrated an ability to lock down a lead, carrying a 40-1 record this season when leading after two periods.

The Bumbacco Trophy was inaugurated in 1994-95 when the league realigned into three divisions.  The award is named after former Sault Ste. Marie Greyhounds general manager Angelo Bumbacco.